The French Open women’s tournament, already a wild ride of upsets and unlikely success stories, was thoroughly disrupted on Sunday when unseeded Polish youngster Iga Swiatek upset No. 1 seed Simona Halep 6-1, 6-2 in the fourth round.

Swiatek, 19, won just one game against Halep in the fourth round in Paris last year, losing in just 45 minutes. But she was the dominant force on the red clay on Sunday, dictating play with her whipping forehand and forcing Halep to lunge repeatedly to keep pace.

It was a stunning rout and one of the most lopsided defeats of the 29-year-old Halep’s career. She had won 17 straight matches in the disrupted 2020 season and 13 straight on clay. She skipped the United States Open because of concerns about traveling during the coronavirus pandemic, and trained mainly on clay during the hiatus. She returned after a six-month break to win titles on the surface at the Prague Open and Italian Open.

On Friday, Halep overwhelmed Amanda Anisimova, the American teenager who had upset her at last year’s French Open, dominating her 6-0, 6-1 this time around. Halep appeared to be in rare form and headed for another title run, but she ended up losing to another teen at this year’s Roland Garros. 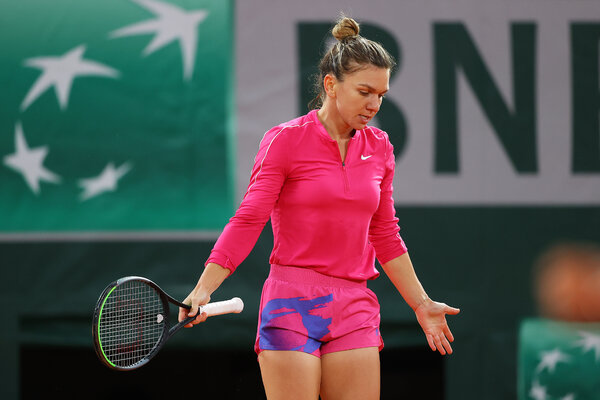 “I’m not going to ruin the whole year just for a match.” Halep said. “Of course it’s not easy to take it, but I’m used to some tough moments in this career. So I will have a chocolate and I will be better tomorrow.”

Less than an hour after Halep’s defeat, Martina Trevisan, an Italian qualifier, opened up the women’s draw even further by upsetting No. 5 seed Kiki Bertens 6-4, 6-4 in the fourth round. Trevisan, ranked 159, already had defeated American teenager Coco Gauff and No. 20 seed Maria Sakkari in the tournament. She finished in style against Bertens, whose best surface is clay, whipping a backhand topspin lob winner that landed on the baseline.

“I’m living a dream, it’s true,” Trevisan said. “I came here two weeks ago to play my qualifying, but today I’m here in the quarterfinals. So oh my God, I can’t believe it.”

This French Open, postponed from its traditional dates in May and June because of the health crisis, was missing key women’s players from the start. Ashleigh Barty, last year’s singles champion who is still ranked No. 1, is riding out the pandemic at home in Brisbane, Australia, after deciding to skip the remainder of the 2020 season. Naomi Osaka, who won the United States Open last month, withdrew from Roland Garros, explaining that the tight, two-week gap did not leave her enough time to recover from a hamstring injury.

But after eight days of play, the women’s tournament is now missing most of its leading players, including Serena Williams, who withdrew with an Achilles’ tendon injury before the second round. Halep’s defeat guarantees that there will be a first-time French Open women’s champion and leaves No. 3 seed Elina Svitolina as the top remaining women’s seed, but Svitolina has yet to reach a Grand Slam singles final. Only four of the 32 seeds remain in the draw: No. 4 Sofia Kenin, No. 7 Petra Kvitova and No. 30 Ons Jabeur.

Not one quarterfinalist from this year’s U.S. Open is still in contention; Kenin and Kvitova both lost in the fourth round in New York.

Swiatek’s father, Tomasz, was an Olympic rower who competed for Poland at the 1988 Summer Games in Seoul. Their last name is regularly mispronounced on the women’s tennis circuit: she politely suggests Shvee-ON-tek.

But she certainly made a name for herself on Sunday. “Even I am surprised that I can do that,” Swiatek said after closing out the victory and burying her head in a towel in her courtside seat.

Halep won the 2018 French Open and followed that up by defeating Williams to win Wimbledon in 2019. Though she could certainly have played better on Sunday — she often failed to hit her balls deep enough, which let Swiatek tee off — Halep did not play poorly. Above all, the 54th-ranked Swiatek rose to the big occasion: competing with genuine swagger.

“All the credit to her,” Halep said. “She played unbelievable today, and she was everywhere. She hit all the balls in: very strong, very powerful. It was a little bit cold, and I couldn’t be at my best, but, yeah, she played really well and it was her match today.”

ST Singaporean of the Year nominee: Rower Joan Poh on her inspiring journey