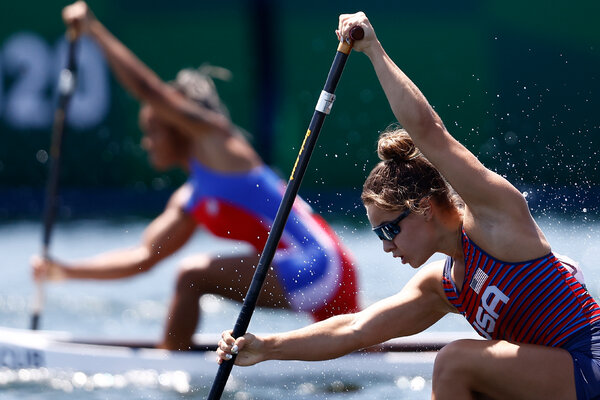 TOKYO — When Nevin Harrison first tried canoe racing at age 12, becoming an Olympian was not the first thing on her mind. Staying out of the water was.

By age 17, she was going fast enough to be a world champion.

There are sports the United States excels at and sports where it does not. It is pretty safe to say that canoeing and kayaking fit in the second category.

At the last world championships in 2019, out of 30 events only one American even advanced to a final. That paddler was Harrison, who won the gold medal in the 200-meter canoe race. Suddenly the United States, of all places, had canoeing’s brightest young star.

Harrison is by far the biggest American name in the sport, and the only canoe or kayak sprinter of either gender to qualify for these Games.

She began competition on Wednesday, winning her qualifying heat in 44.94 seconds and then advanced to the final by breezing through her semifinal on Thursday morning with the fastest qualifying time. That made her the favorite in the eight-woman final later in the day, scheduled to begin at 10:57 p.m. Eastern. All races will be streamed live on Peacock and NBCOlympics.com, and the finals will be broadcast on CNBC at 1:15 a.m.

Harrison, now 19, was a standout in soccer, softball and track while growing up — sports more typical for a young American with athletic talent. But misfortune made her turn her focus to canoeing. She began feeling hip pain at age 14. Hip dysplasia was diagnosed, a condition in which the hip socket does not connect correctly with the thighbone. “A doctor said there was no way I was going to compete in sports again,” she said. “That was super devastating for me. I had only ever hoped to be an athlete.”

Running and sports that involved running were hard on her hip, so she turned her focus to canoeing. Once she mastered staying in the canoe, she started getting better. Her upward trajectory to world champion at 17 was dizzying.

“It was nothing short of crazy,” she said. “I couldn’t really believe it; things were happening so fast.”

Women’s canoeing was added to the Games for the first time in Tokyo, and Harrison’s event, the 200 meters, is the individual race that is being contested.

The race, the shortest in canoe/kayak, lasts about 45 seconds. But it isn’t an all-out dash. “It’s similar to the 400 meters in track,” she said, another event that takes roughly 45 seconds. “It’s a sprint, but there’s a little bit of strategy because you can’t quite go 100 percent for 45 seconds.”

“People have different strategies,” Harrison said. “I tend to go really hard for the first 50, the second 50 just try to keep it up and try to stay ahead (if I am ahead), and then in the last 100 build up to top speed.”