Larry Wilson, the Hall of Fame St. Louis Cardinals defensive back who helped transform the position of safety into that of a more aggressive, blitzing defender, died on Thursday at his home in Scottsdale, Ariz. He was 82.

Wilson had been treated for cancer, the team said in announcing his death.

Wilson spent his entire working life with the Cardinals, starting in 1959, when he was drafted in the seventh round by the team, which moved from Chicago to St. Louis the next year. After retiring as a player, he was an executive with the team for three decades.

As durable as any player in the league, Wilson started nearly every one of the 169 games in which he played over 13 seasons. He was named a first-team All-Pro five times and selected to eight Pro Bowls. He notched 52 interceptions, returning five for touchdowns. He was one of six safeties named to the N.F.L.’s all-time team, chosen to honor the league’s 100th anniversary in 2019. He entered the Pro Football Hall of Fame in 1978, his first year of eligibility.

The Cardinals never made the playoffs while Wilson was with the club. But the Cardinals’ defense, with Wilson at its core, was ranked in the top half of the league for seven of his 13 seasons. Although only six feet tall and only 190 pounds, he was nevertheless considered one of the league’s toughest players.

“There’s nothing humorous about playing football,” Wilson told The Daily Herald of Provo, Utah, in 1972. “When someone gets in a good lick, we all laugh, but it really isn’t amusing.” 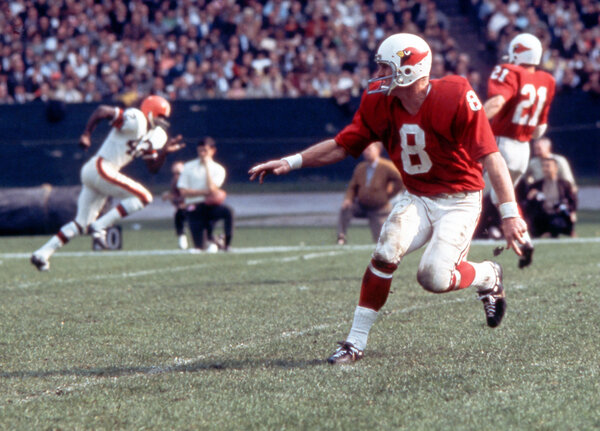 His signature became the safety blitz. At the time, safeties and cornerbacks typically lined up against wide receivers or deep in the backfield. The Cardinals’ defensive assistant, Chuck Drulis, thought he could overwhelm offensive linemen and surprise quarterbacks if one of his safeties ran up to the line before the ball was snapped and then blitzed the passer.

In Wilson, Drulis found a player quick and agile enough to pull off the play. Wilson, who played halfback and cornerback at the University of Utah, was converted into a free safety. He became so closely identified with the safety blitz that coaches called the play “Wildcat,” which was Wilson’s nickname.

Wilson created plenty of mayhem in the defensive backfield as well. His 52 interceptions and 800 career interception-return yards are team records. In 1966, he led the league with 10 interceptions and set a team record by intercepting a pass in seven consecutive games, the second-longest streak in N.F.L. history. He also recovered 14 fumbles.

Wilson intercepted a pass in a game in 1965 with casts on both hands to protect broken fingers. He returned the interception for a touchdown, helping the Cardinals beat the Pittsburgh Steelers, 21-17.

At the Pro Bowl early in his career, Wilson went to shake hands with Y.A. Tittle, the Hall of Fame quarterback who was on the receiving end of more than a few of Wilson’s safety blitzes. “If I’d known you were this small,” Tittle told him, I’d never have been that scared of you.”

Lawrence Frank Wilson was born on March 24, 1938, in Rigby, Idaho. His favorite sport growing up was basketball, but at the University of Utah, which he attended after graduating from Rigby High School in 1956, he was a two-way football player. On offense, he was both a receiving and running threat out of the backfield. But he was not drafted by the Cardinals until the seventh round because he was considered too small for his position.

After he retired from the playing, Wilson worked in the Cardinals’ front office as director of pro scouting for four years and as director of pro personnel for two. He served as interim head coach for the final three games of the 1979 season.

When the Cardinals moved to Arizona in 1988, Wilson became vice president and general manager, positions he held until 1993. He then held various other titles before retiring from the team in 2003. His jersey number, 8, was retired in 2006.

He is survived by his wife, Nancy (Drew) Wilson; a daughter, Christie; a son, Larry Jr.; numerous grandchildren; and one great-granddaughter.

If he was fierce on the field, Wilson was easygoing and humble off it. During his last visit to the Pro Football Hall of Fame in Canton, Ohio — for the 2016 induction ceremony — Wilson and the other Hall of Famers in attendance lined up in their gold jackets. Wilson happened to be standing next to Jim Brown, one of the most fearsome running backs ever. Turning to Brown, he said, “Well, this is the closest I ever got to you.”

In 1973, a year after he retired, friends wanted to erect a statue of Wilson in St. Louis. Money was raised, but Wilson said he’d prefer that it be spent on the St. Louis Children’s Hospital.

“I just didn’t want,” he said. “to be a target for all those pigeons.”

Why Karl Dorrell “is the man” for the CU Buffs, especially in The Year of COVID-19

Your Daily Dose of… pod of gold