Home » Justin Gatlin Is at Home at Tokyo’s Test Event

Last weekend, the American sprinter Justin Gatlin walked to the starting line of a 100-meter race at Olympic Stadium in Tokyo alongside six other sprinters. It was perhaps one of the more ordinary sights the running world had seen in the past year and a half.

Gatlin, a three-time Olympian and a five-time Olympic medalist, was one of just nine international athletes who had been invited to compete in a test event ahead of the Summer Games that included more than 350 athletes and 1,620 operational staff members who worked to stage a smooth and safe event.

The meet — called Ready Steady Tokyo — was the latest in a series of test events that have been held around Japan as the country readies for an abnormal Olympic year. In early May, there were test volleyball and diving events in Tokyo and a test half marathon in Sapporo, where the full marathon is scheduled for this summer.

Gatlin was among the biggest Olympic stars who participated. He has been to three Olympics, in 2004, 2012 and 2016, missing 2008 while serving a four-year suspension after testing positive for steroids.

On Friday, having arrived back in the United States, Gatlin described the experience as a mix of surreal and ordinary. Along with his chiropractor, Gatlin arrived in Tokyo for a six-day visit with the ability to go to one of three places at specific times. He could be in his hotel room, pick up food one floor below him, or go to the track at designated times. Meals were packaged to go at specific times, and he was instructed to eat in his hotel room and leave the trays outside his door for pickup. He was always masked and was given a coronavirus test daily.

The protocols for the test events mirror those listed in the second round of the so-called Olympic playbooks released by organizers in April. Organizers say they will test athletes daily and nonathletes “regularly,” depending on their roles. Members of the news media will be encouraged to eat takeout meals alone, and all participants, including coaches, officials and members of the news media, have been asked to avoid public transit.

The restrictions were even tighter for the test runners. And none of it was easy for Gatlin. The 39-year-old describes himself as a “culture person” who enjoys exploring the cities where he competes, something he has done since he began running on the global professional circuit after college.

That longing melted away when he walked onto the track.

He sure did look at home when he lined up in Lane 7 on Sunday. The athletes looked down the line, shook their legs and bounced their feet back into starting blocks. All signs pointed to an average elite track meet, until the cameras shifted just enough so viewers could see volunteers wearing face masks and tens of thousands of empty seats in the background.

“It wasn’t the fastest time I’ve ever had, but under those conditions, with the bubble and quarantine, it felt good to get the win,” he said, and then added after a pause, “I can say I got the first win in the Olympic Stadium.”

The joy in his voice was clear, the hunger to get back to that track for the real thing, and his confidence that the Games could be held successfully.

“I can’t think of anywhere else the Olympics could be successful,” he said, describing his varied experiences racing around the globe. “Japan already has that instilled in their culture, to be cautious and systematic.”

That said, many people in Japan are fearful that the Games could turn into a coronavirus superspreader event, with thousands of people arriving in Tokyo from hundreds of countries that are all at different stages of the pandemic. And last week, Japan extended a state of emergency in Tokyo and other regions until the end of May to contain a surge of coronavirus cases.

Gatlin acknowledged that fear, and those who are against holding the Games. “I can’t put my Olympic dream in front of someone’s life,” he said. “But let’s take every precaution and safeguards before we decide to cancel or once again move the date of the Olympics. I think that if we are making gains around the world, being safe and if everyone is on their p’s and q’s wearing their masks, social distancing and disinfecting, we have a great chance of having a successful Olympics.”

To get back to that start line though, he will need to make it through the U.S. Olympic qualifying event in Eugene, Ore., scheduled for June 18 to 27. The men’s 100-meter final is planned for June 20.

He will be racing against some sprinters who grew up watching him compete on the global stage. In 2016, at 34, Gatlin became the oldest man to win an Olympic medal in the 100 meters.

He doesn’t plan on slowing down, though. In mid-April, he ran a 9.98 at the Tom Jones Memorial Invitational, edging out the Canadian Andre De Grasse, who is 26, and Noah Lyles, who is 23.

“I had a really good practice today,” he said as we were wrapping up our conversation. 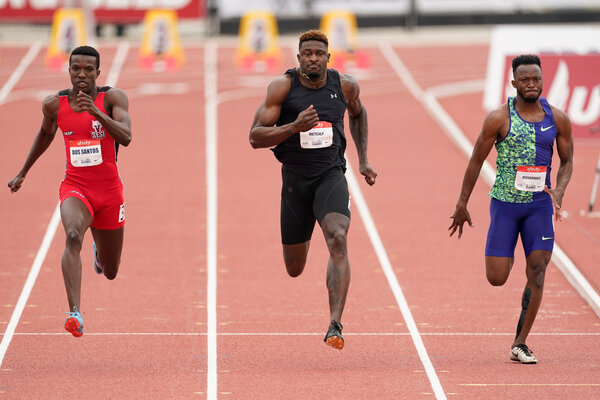 Sure, you may have heard about DK Metcalf, the All-Pro receiver for the Seattle Seahawks who raced in the 100 meters last weekend.

But have you watched it? Metcalf’s race quickly made it to the YouTube trending page, garnering 2.8 million views since the race. He ran in 10.363 seconds and finished 15th out of 17th in two preliminary heats. Why do this? Metcalf was asked. “Why not?” he replied.

“The findings underscore how braided the relationship between physical activity and psychological well-being can be, and how the effects often run both ways,” Gretchen Reynolds writes.

I will click on anything that is labeled for “the Carb-Hungry and Time-Starved.” This collection of quick bread recipes from our friends at NYT Cooking has 18 recipes that you can try this weekend.

You should cross train. Yes, you.

Strength training improves performance and can lower injury risk. But it doesn’t have to take hours at the gym to see results, Dr. Jordan Metzl and Karen Barrow write.

This nine-minute full-body strength-building workout is a great place to start. All you need is a little room to move around. Click here to give the workout a go.