Home » How Nikola Jokic Became the Favorite for the N.B.A. M.V.P. Award

How did Nikola Jokic of the Denver Nuggets become the prohibitive favorite to win the N.B.A. Most Valuable Player Award?

At the end of last season, he was by consensus a great player, but he still finished a distant ninth in the M.V.P. voting, behind the runaway winner, Giannis Antetokounmpo of the Milwaukee Bucks, and the runner-up, LeBron James of the Los Angeles Lakers.

But with two weeks left in this regular season, N.B.A. silversmiths have practically started engraving his name on the Maurice Podoloff Trophy.

The place to look for the most straightforward signs of M.V.P. candidacy is the scoring list. Going into Monday night’s games, Jokic ranked 11th with 26.2 points per game. That’s an improvement of 6.3 points a game from last season.

It’s not hard to see the source of the improvement. Jokic is taking 14.6 shots from 2-point range, up by a bit more than three attempts compared with his average last season, and he is making about two of them. That’s 4 more points a game. He’s going to the line and converting one more time a game, so that’s about 1 more point.

One major improvement to his game has been his 3-point percentage. After five seasons shooting in the 30s, he has made 41.2 percent this season. He is still taking about three a game, so that accounts for the sixth point of his scoring increase.

But shooting more often from the field, and making an extra 3-pointer here and there, is not all Jokic has done to upgrade his game this season.

While many of his always-excellent stats — rebounds, steals, blocks, turnovers — are more or less unchanged, Jokic has taken his outstanding passing game up another notch. He is averaging 8.5 assists a game, up from 7.

Viewed another way, he is assisting on 40.4 percent of his teammates’ successful field goals, up from 35.2 percent. That figure ranks sixth in the league.

What’s so remarkable about that? Jokic is 6-foot-11. The five players above him on the assist percentage leaderboard are all guards. The next true center is down at 27th — Bam Adebayo of the Miami Heat coming in at 27 percent. 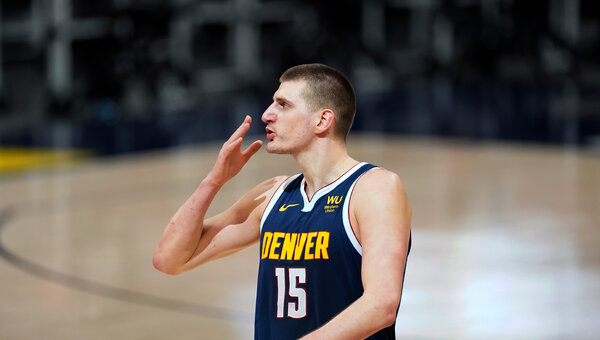 Yes, the Nuggets’ offense actually runs through their big man. After Jokic, the next Nugget on the assist percentage list is the injured Jamal Murray, a 6-foot-3 guard who is in 63rd place at only 20.2 percent.

Jokic’s assist numbers have swelled because of one of his trademarks, the long outlet pass, which has been likened to a pass in water polo, a game Jokic once played in his native Serbia.

Jokic has amassed his strong raw numbers even though his team is playing at a very slow pace. The Nuggets average 97 possessions per 48 minutes, ranking 28th in the league, ahead of only the pokier Heat and Knicks. It’s a lot easier to lead the league in scoring and other categories when your team is closer to the 103.8 possessions of the Washington Wizards or the 102.4 of the Golden State Warriors.

Jokic has said he prefers the slower pace in part because of his lack of foot speed.

Add up all of his numbers and you get an impressive statistical picture.

The N.B.A. ranks Jokic second in offensive rating, or points per 100 possessions, behind Kawhi Leonard of the Los Angeles Clippers. Basketball Reference rates him first in several of its catchall stats, including offensive win shares, box plus/minus and value over replacement player. He’s doing it as an ironman, too, having logged more minutes than any player except Julius Randle of the Knicks.

If there is a knock against Jokic’s M.V.P. case, it comes from those who believe team performance should be a vital part of determining the award’s winner. The Nuggets made it to the conference finals as the third seed in the West in the truncated 2019-20 season, and they are on course to earn the third seed again. Going into the season, they were seen as some degree short of the two Los Angeles teams. But those teams have faltered because of injuries, and Denver instead trails the Phoenix Suns and the Utah Jazz.

Whatever seed the Nuggets wind up with will be quickly forgotten if Jokic leads them to their first N.B.A. finals appearance. The team is certainly peaking, having won nine of its last 10 games going into Monday night, all without Murray in the lineup. But that won’t matter in the M.V.P. race; news media members’ ballots are due at the end of the regular season.

At least one group has virtually awarded Jokic his M.V.P. already. Bookmakers around the country are making him the 1-5 favorite to win. Bet $50 on the proposition, and you’ll make only a $10 profit.

The Celtics Have a Bright Future — and a Low Ceiling?

E-sports: Singapore gamers to participate in #PlayApartTogether to raise funds for vulnerable groups