Taylor was a Black emergency medical worker fatally shot by police in her home in Louisville, Kentucky in March. 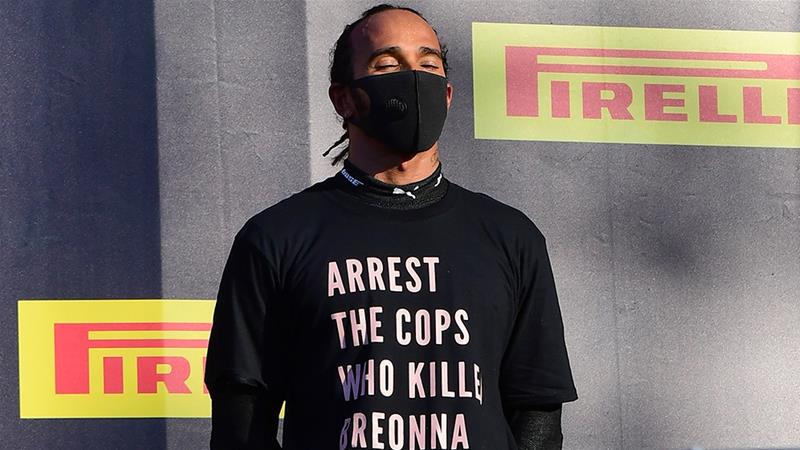 Formula One champion Lewis Hamilton kept his cool amid the mayhem caused by an unpredictable circuit, winning a crash-marred Tuscan Grand Prix for the 90th win of his career to move one behind Michael Schumacher’s record.

But Hamilton’s focus was elsewhere as he stood on the podium on Sunday wearing a T-shirt featuring the words: “Arrest the cops who killed Breonna Taylor.”

Taylor was a Black emergency medical worker fatally shot by police serving a narcotics search warrant in her home in Louisville, Kentucky on March 13. The shooting has sparked months of protests with calls for the officers to be charged over her death and Taylor’s name has spread to protests against racial injustice around the world.

“Justice for Breonna Taylor,” Hamilton said during his interview after winning.

Hamilton also wore the T-shirt which had the words “say her name” and a photograph of Taylor printed on the back, as he knelt with other drivers before the anthem as part of the sport’s now-regular anti-racism stance.

The first F1 race on a Mugello track with superfast corners usually used by MotoGP riders was incident-packed. Two crashes on the first seven laps saw six drivers go out, and a red flag suspended the race for the first time after the second one.

Bottas is now 55 points behind Hamilton, who is odds on to equal Schumacher’s record of seven F1 titles.

Hamilton can equal Schumacher’s win record at the Russian GP in two weeks.

“It was all a bit of daze. It was like three races in one day. Just incredibly tough today,” Hamilton said.

The British driver, the sport’s only Black competitor, has previously worn a “Black Lives Matter” T-shirt at other Grands Prix.

US Open tennis winner Naomi Osaka donned a face mask with Taylor’s name on it as one of a series of masks she wore on her way to the title and Hamilton hailed the Japanese player’s action.

“It took me a long time to get that shirt,” he told reporters afterwards.

“I’ve been wanting to wear that and bring awareness to the fact that there’s people there that have been killed on the street and there’s someone that got killed in her own house. And those guys are still walking free.”

One police officer involved was fired by the city’s police department in June. Two other officers have been placed on administrative reassignment. No criminal charges have been filed against any of the three.

“We have to continue to raise awareness with it and Naomi has been doing amazing, so huge congratulations to her. I think she’s an incredible inspiration with what she’s done with her platform,” Hamilton said.

Mercedes team boss Toto Wolff said on Saturday that Hamilton, who has been a prominent campaigner for diversity and racial equality, was free to make whatever anti-racism statement he wanted.

Is the gold in your phone funding drug gangs?