The challenge seemed simple and direct.

Rebuke Senator Kelly Loeffler of Georgia for her race-baiting derision of Black Lives Matter. Help remove her from her post. Make her continued ownership stake of the Atlanta Dream feel increasingly unbearable.

But the searing events of last week provided yet another reminder to the W.N.B.A. and its ubiquitous athlete activists that there is always more to be done.

Nobody knows this better than the Dream’s Elizabeth Williams.

Unless you are a serious fan of women’s basketball, you probably do not know of Williams. In an era in which athletes are taking star turns for speaking up for justice, she should be a household name.

Once uneasy with making her feelings known, she found her voice amid the pain and protest of last summer. She ended up at the center of a unique moment in the annals of American sports: the mutiny by a group of professional players against their team’s prominent and powerful owner.

Williams led the Dream’s decision to denounce Loeffler, who controls a 49 percent stake in the team.

Then, in her role with the league’s union, she helped guide the move by W.N.B.A. players to endorse the Rev. Raphael Warnock — a political newcomer and decided underdog, as he bid to unseat Loeffler from the Senate.

That race, of course, came down to a tense runoff vote. “Just because somebody owns the team, that doesn’t mean they own you, or own your voices,” Warnock said, days before the election, as he thanked the league for its stand.

Where was Williams when Warnock beat Loeffler last week?

In Turkey, where she has been playing in a women’s league since October — typical of the off-season, overseas grind W.N.B.A. players endure to boost earnings that are a pittance compared with their male colleagues’.

She barely had time to savor Warnock’s victory when on Wednesday she watched in horror as a mob of Trump loyalists stormed the Capitol.

“An act of terror,” she called it, as we spoke over the phone.

“Seeing the faces of those people as they were in the Capitol, seeing their hubris, that’s what pained me,” she said. “They looked so confident that they were not going to face any consequences. That was a reminder of the systemic issues we face. The depth and complexity.”

She continued: “For us in the W.N.B.A., it started with this election, but unfortunately, what happened in D.C. reminded us that there are still people out there who feel emboldened to stand against the ideals we believe in.”

I could hear the irritation in her voice as she discussed the absence of a clampdown by law enforcement at the Capitol. In June, after the death of George Floyd, she attended a protest in downtown Atlanta. It was her first. Until that day, she had been hesitant to speak out about social justice. She tended to stand back, and let others do the talking.

But the demonstration in Atlanta changed her. She recounted the stern and overwhelming police presence. She said she was not alone in having to gird against intimidation. The entire crowd felt wary.

And yet she said she had never felt so strong, so connected to a cause. The march changed her. Standing back was no longer an option. Little did she know that days later, Loeffler would attempt to score political points by ripping a page from the Trump playbook and trying to pick a fight with Black athletes.

In a letter to the league commissioner, Cathy Engelbert, Loeffler denounced Black Lives Matter — which the W.N.B.A., in keeping with its history of activism, had embraced. Loeffler called B.L.M. a political movement and unspooled a string of false claims, including that it promotes “violence and destruction across the country.”

To say that players in a league that is 70 percent Black did not take kindly to such words is putting it mildly. 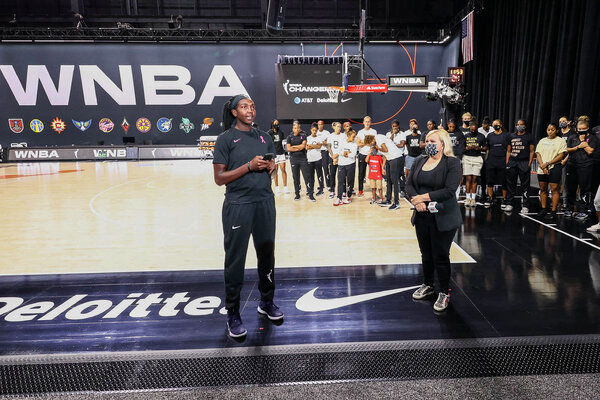 Once the W.N.B.A. began its pandemic-shortened 2020 season in July, she brought her team together and helped write a sharp rebuke.

“We would have been lost without Elizabeth,” Dream guard Blake Dietrick said. She praised Williams, a 6-foot-3 center and the team’s longest tenured player at age 27, for her steady wisdom and understated leadership. “Without her, I’m not sure we come up with such an eloquent, firm response.”

When Jacob Blake was shot seven times in the back in August by a police officer in Kenosha, Wis., the team chose Williams to respond.

Suddenly there she was, live on national television, hesitancy shed as she announced that her team and the league would protest by not playing, even if only for a few nights.

“We all hurt for Jacob and his community,” she said, speaking to the camera. “We also have an opportunity to keep the focus on the issues and demand change.”

She implored fans: “Don’t wait. If we wait, we don’t make change. It matters. Your voice matters. Your vote matters. Do all you can to demand that your leaders stop with the empty words and do something.”

Fast forward to last week, and its vivid displays of American hope and American horror.

Williams reeled at the developments from afar.

The news that no charges would be filed against the officer who shot Blake.

The predawn group text Williams received from Sue Bird, the 40-year-old Seattle Storm guard who has become a league sage.

“Soooo we helped turn a Senate seat,” the text read.

A few hours later, news came that Georgia’s other Senate race was over: Jon Ossoff had defeated the incumbent, David Perdue, a Republican, tipping control in Washington toward the Democrats.

Not long afterward, Williams found herself on her phone again. Only this time, she was doomscrolling through video clips of chaos in Washington.

She is the only American on her Turkish team. Few ask about her activism. But an inquiring teammate saw Williams’s sadness and had questions.

“This is the United States Capitol?” the teammate asked, in halting English. “Where is the security?”

Williams had no good answers, only strong emotions. Anger at the strife in America. Embarrassment. And more than anything, a firm resolve to continue speaking out.

Mets' Robinson Cano suspended for 2021 season: How much money will he lose?