The former swimmer said it was “like an out-of-body experience” to win seven gold medals at the 1972 Munich Games and then learn that terrorists had attacked Israelis at the Olympic Village.

SANTA MONICA, Calif. — On Sept. 5, 1972, a brief editorial in The New York Times noted that “nothing that has happened in Munich so far this summer can compare with the awesome feats of Mark Spitz, swimmer extraordinary.”

Between the time the editorial was written and the paper was tossed onto doorsteps in those pre-internet days, Spitz’s seven Olympic gold medals and seven world records were overshadowed. And the long-held notion of the Games as a peaceful gathering of the world’s athletes was unalterably shattered.

Spitz’s career remains forever intertwined with the massacre in Munich because of his unprecedented success in the pool and because of his Jewish faith that, security officials at the time feared, might also make him a target.

He learned of the unfolding attack from a sportswriter the morning after his final swim, was placed under guard and was quickly whisked away to London, then home to Sacramento. He said he remained under police protection there for days and watched the televised memorial service for the slain Israelis as the Games were halted for 34 hours.

“It was like an out-of-body experience,” Spitz, 22 at the time and now 72, long shorn of his famous mustache, said in an interview last week at an oceanfront hotel. “Forty-eight hours earlier, or a little longer, I had been there. The feeling was, wow, it’s hard to believe that happened” to the Israelis. “Why would somebody do that to an innocent group of people who had only good intentions?”

About 4:30 a.m. central European time on that Sept. 5, a half-century ago, eight Palestinian terrorists dressed in tracksuits and carrying assault rifles and hand grenades in their gym bags scaled a fence into the poorly secured Olympic Village in what was then Munich, West Germany. Apparently, the Palestinians were assisted unwittingly by water polo players from Canada who were returning from a night out and mistook them for fellow athletes. 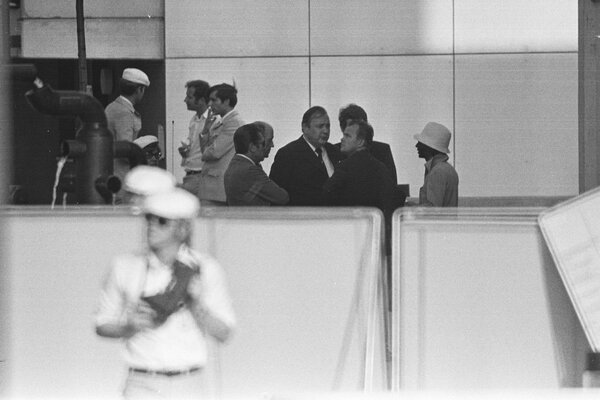 The terrorists moved unimpeded to the Israeli team apartments at 31 Connolly Street, shot to death a wrestling coach named Moshe Weinberg and killed and mutilated a weight lifter named Yossef Romano. Nine Israelis were taken hostage and, early on Sept. 6 after a long standoff, all were killed after a disastrous rescue attempt at a military airport near Munich. Among the dead was a weight lifter named David Berger, who grew up in Shaker Heights, Ohio.

As hopes of a rescue faded, the ABC commentator Jim McKay said with mournful economy, “They’re all gone.”

Spitz’s Olympic triumphs and the massacre took place only about 10 miles from Dachau, the first concentration camp built by the Nazis. Spitz lamented to Swimming World Magazine on the 30th anniversary of the murders that “27 years after World War II, there were still madmen killing Jews because they are Jews.”

Last week, he described himself as a tunnel-visioned competitor in Munich who considered himself an athlete and an American who happened to be Jewish. Through the years, he has said in interviews, the massacre brought deeper affirmation of his faith. Recently, he told the Jewish News Syndicate, “We were five or 10 miles from Dachau. What better time to stand up for who we are?”

He said last week that he had been to Israel three times since the Munich Games, including in 1985 and 2005 to attend the Maccabiah Games, sometimes called the Jewish Olympics, and had met some of the wives and children of the slain Israeli athletes on both occasions. Twice in the 1960s, he competed in those Games, Israel’s biggest sporting event.

In 1985, 13 years after the murders, Spitz said the bereaved wives told him their husbands would have most likely supported the much-criticized decision by the International Olympic Committee to continue the Munich Games as a repudiation of the terrorist attack.

Spitz carried the torch and lit the flame for the opening of the 1985 Maccabiah Games, escorted by three daughters whose fathers had died in the massacre. He decided to wear black pants instead of white to commemorate the Munich tragedy.

Entering the dark stadium with the daughters, Spitz told The Times in 1992, he felt as if he “had become their surrogate father, like a link with something from the past. It was an eerie feeling, like I was putting life back into these people inside the stadium. I’ll never forget that.”

Spitz said last week that he was speaking in Albany, N.Y., in 2005 or 2006 when an elderly Jewish man told him he loved watching the Olympics and added, “‘You saved my life.’”

“What do you mean?” a puzzled Spitz asked.

The man, speaking with a heavy German accent, replied that during the 1936 Berlin Olympics, while Jesse Owens refuted the idea of Aryan supremacy, a distracted Hitler had “‘stopped gathering us and we were able to escape.’” As Spitz recalled it, the man said he had always associated this bolt for freedom with athletes and the Games, telling him, “‘I just love that you’re an Olympian.’”

For two decades, Spitz has been affiliated with Laureus, a global organization dedicated to sporting excellence and using sport to help transform the lives of young people. He still swims two or three times a week in his backyard pool in Los Angeles and said he still received from two to 50 fan letters a day, often from students doing class projects.

He said he was proud to represent pioneering accomplishment as a Jewish athlete and to acknowledge his faith. But he said he sometimes felt pressure to be something larger, more urgently meaningful, adding, “I never projected myself to be a spokesman for the Jewish community or the religion as a whole.”

“To keep my sanity,” Spitz said, “I can’t think about stuff like that.”

When he speaks to Jewish groups, Spitz said, he tells them he is no standard-bearer but “only a conduit to plug into your own identity.”

He describes his primary memories of Munich as those of athletic fulfillment. He said he considered himself “a failure” at the 1968 Mexico City Olympics for winning only two relay gold medals and a silver and a bronze in individual events. His seven gold medals and seven world records in Munich, Spitz said, signified that “I finally got to the finish line the way I envisioned.”

It was not until he awakened in London on Sept. 6, 1972, that Spitz learned that all 11 Israelis had been killed. That day, before flying home to California, he was photographed for Stern, a German magazine, out of which came an iconic poster of Spitz wearing his seven gold medals and a star-spangled swimsuit.

He was quoted by Swimming World in 2002 as saying that the photo session seemed “so unimportant while this life-and-death drama was taking place,” but that he had negotiated a $50,000 contract and felt he should fulfill his obligation.

Amateurism prevailed then in the Olympics, but Spitz retired after the Munich Games and was thus eligible to earn money for his achievement. He said last week that he had intended to use the money to attend dental school (he later changed his mind about attending) and to buy a new car.

There was debate at the time about whether it was appropriate to cash in on his medals with various sponsorship deals, given that his triumph was associated with tragedy, and Spitz received some criticism. But he told The Times in 1982 that “I don’t think I would have done anything differently.”

Last week, Spitz said, “The things I took as sponsorships were things that related to my lifestyle. For example, I signed with a company that made swimsuits. I wasn’t endorsing alcohol. Or cigarettes.”

By his estimate, Spitz has returned to Munich at least 30 times since the 1972 Olympics, most recently last October to be interviewed for an I.O.C. documentary. A memorial to the slain Israelis opened in 2017 at the Olympic Park. Apartments that housed male athletes have been transformed into a residential area.

During the opening ceremony for 2021 Tokyo Olympics, the I.O.C. finally held a moment of silence for the Israeli athletes and coaches after decades of imploring by the bereaved families. After threatening to boycott the 50th anniversary commemoration in Munich, the families last week reached a settlement with the German government over financial compensation.

“Life does have a funny way of moving in the direction of forward,” Spitz said. “The faster you move in that direction, the better off in some ways you are. But always remember, it’s OK to look back from where you came from. And don’t ever forget that. That’s my focus.”

Don’t Be Fooled by the Playful, Merry-Making Travis Kelce