Home » Sports » For England, a Six-Second Culture War and a One-Goal Win

LONDON — Daniele Orsato caught the eye of Harry Kane, the England captain, and pointed to the turf. He had caught Kane a little unaware, perhaps — the forward was still going through a final few stretches — but he nodded his assent. Orsato, the Italian referee, put his whistle to his lips, and gave light to a six-second culture war.

It is not especially unusual for England to find itself putting the finishing touches on its preparations for a major tournament against a backdrop of angst and acrimony. There is, with England, always something: a key player injured, a flavor of the month off the team, a concern over whether the squad is being treated with too much, or too little, discipline.

The last few weeks have not proved particularly fertile for that sort of traditional fretting. A manufactured quarrel over whether the coach, Gareth Southgate, had erred by electing to name four specialist right backs — a lot of right backs, by anyone’s standards — on his original roster offered hope of a good, old-fashioned controversy. It sputtered when one of them, Trent Alexander-Arnold, picked up an injury that ruled him out of the tournament. Deep down, nobody thinks having three right backs is excessive.

His decision to include Jordan Henderson and Harry Maguire, both of them nursing injuries and neither likely to be fully fit for the group stage, might have made an acceptable alternative, but even that failed to fire. Southgate had the luxury of naming 26 players to his squad, not 23; Henderson and Maguire, two of his most experienced campaigners in the two areas of the field where his options were thinnest, were clearly worth the risk.

All of which should have meant that England was in territory welcome for Southgate and disconcertingly unfamiliar for fans and the news media alike: approaching a tournament without waking up in cold sweats in the night, with no rancor filling the airwaves or consternation populating the news pages. 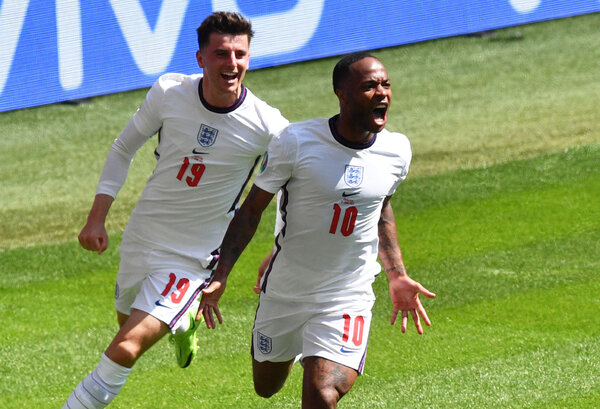 Instead, Southgate and his players found themselves front and center in something much more serious. Like the vast majority of their peers in the Premier League, England’s players have, for the last year, been taking a knee before matches, a gesture adopted from athlete activists in the United States and instituted — at the players’ suggestion — in the aftermath of the murder of George Floyd at the hands of a police officer last year.

When England took the field for its two final tuneup games ahead of this tournament — both of them staged in Middlesbrough — it did the same. This time, though, the players were jeered as they did so: by a substantial enough portion of their own fans for it to come through, loud and clear, to the watching public.

For a week, the gesture and its reception seemed to set England’s players, and staff members, against the core of their own support. Taking the knee, the players were told, was divisive, it was political, it was a meaningless trinket that took attention away from real action, though none of their critics ever took the time to suggest what real action might look like.

Several Conservative lawmakers railed against the players’ support for what they say is a Marxist movement dedicated to eradicating the nuclear family and attacking Israel. One, Lee Anderson, revealed that he would no longer be watching his “beloved England.” Boris Johnson, the prime minister, initially failed to condemn those who stood in opposition to an antiracist act, though he later asked that fans support the team, “not boo.”

England has also been convulsed, in the past week, by the decision of a small group of students at a single Oxford college to remove a portrait of the queen from their common room. This is how a culture war is played out, in a series of what appear, in isolation, to be entirely absurdist skirmishes. Is anyone offended by some students not wanting to have a picture of the queen on their wall? Does anyone really think Jordan Pickford is a Marxist?

Even under that pressure, the players stood their ground. Southgate offered not only his support, but effectively his cover, too: He had consulted his players, he knew their views and he would present them, drawing whatever fire might come their way. The Football Association, the game’s governing body in England, issued a surprisingly blunt statement outlining that the players would kneel, that they did not regard it as a political gesture and that no amount of hostility would change that.

This, then, was the test: The moment after Orsato blew his whistle but before England’s opening game of Euro 2020, against Croatia, actually began, those who object to the players taking the knee, those who believe the athletes representing their country must do as they are bidden, were confronted with what, now, has become an act of defiance.

The whole thing played out in the blink of an eye. The jeers began the first offensive. Just as the music cut out, there was an identifiable chorus of disapproval. But the jeers were quickly pushed back. A much larger proportion of the crowd started to cheer, to applaud, to drown out the objectors. Within six seconds, it was all over. Orsato stood up, followed by Kane and the rest of the England team. The game kicked off. Everyone cheered.

This is the myth, of course. Southgate had said, as he chewed the matter over last week, that he knew his team could rely on the support of the fans during the game. That is true: The people who were booing wanted England to win. They celebrated when Raheem Sterling, as articulate an advocate for the causes reflected by taking the knee as anyone in soccer, scored the game’s single goal in the bright, warm sunshine.

It is but a small leap from there to the belief that, should this prove to be the first win of seven over the next month, should England end this summer as European champion for the first time in its history, then some sort of social victory will have been secured, too.

That is what they said about the Black, Blanc, Beur team that led France to the World Cup in 1998; it is what they said of the German teams of 2008 and 2010 and on, too, the ones made up not of Jürgens and Dietmars and Klauses but Mesuts and Samis and Serdars. These were the teams that could usher in a new, postracial future. Soccer liked to tell itself that it offered a better vision of what a country could be.

It is a chimera, of course. Everyone cheered at the end here, too, once England had seen off a tame Croatian team, the sort of victory that is noteworthy not for its spectacle but for its cool and calm efficiency. England barely got out of second gear because it did not need to, much; better to save the energy for the tougher tests that lie in wait.

But that does not mean anything has changed. There is still the possibility that when Scotland comes to town next weekend, the players will be jeered by another small section of the crowd.

It will be a minority, once again, just as it was here, and there is hope in that, a poignant metaphor for the dangers of assuming that the most vociferous must automatically speak for some sort of vast constituency. But they will still be there, the great anti-Marxist vanguard, unyielding and unchanging and unwilling.

No victory on a soccer field will change that. The sight of Sterling’s lifting a trophy on July 11, in this same stadium, would not alter anyone’s worldview. Soccer is the stage on which we have these conversations — in Europe, as Henry Mance wrote in The Financial Times last week, it is often the only place that many of us really interact with our nation as a concept — but it is an imperfect one.

We want a team that reflects the country, we say, but we do not mean it: We want a team that reflects us, and our perception of what that country is. England can win, or it can lose, over the next month, but it will make no difference at all in the broader context. It is too much to ask a single sports team to reflect what a country means to 55 million individuals. It is far too much to expect it to heal all of its divisions with a single victory, no matter how loudly it is cheered.

Building a Lacrosse Powerhouse Out of Overlooked Recruits

N.F.L. Week 10 Predictions: Our Picks Against the Spread