For two decades, the Olympic equestrian sport of eventing has held prestigious competitions on a Pennsylvania estate with a landscape perfect for horses and riders to demonstrate strength, endurance and grace while jumping over a variety of solid and natural obstacles.

Rather than change its name, as some in the sport have called for in a time of heightened awareness over systemic racism, the owner of the property has decided to cancel the lease for events going forward, casting doubt over the future of eventing competitions at the site, including the renowned Plantation Field International Horse Trials.

Plantation Field Equestrian Events, the nonprofit that puts on the eventing trials and other competitions on the land, said the name had no connection to slavery.

The estate in Unionville, Pa., — a historically Quaker and abolitionist community that was part of the Underground Railroad — is owned by Cuyler Walker, a former East Marlborough, Pa., supervisor who is now chairman of the area’s planning commission.

Yet those who have pushed for the change said that, whatever the original intent, the word now has negative associations with slavery.

The drive for the change was initiated in June by Eventing Nation, an equestrian news site, when its editors reached out to the United States Equestrian Federation and a subsidiary, the Eventing Association, about changing the name. The organizations said that neither had the power to make an event change its name.

In August, Eventing Nation notified the nonprofit that it would not be using the word “plantation” on its news site in its coverage of the trials. The Plantation Field organizers responded by revoking the media credentials for Eventing Nation’s reporters, according to its editor in chief, Leslie Wylie.

The Plantation Field International Horse Trials, which consist of dressage, cross-country and show jumping with both Olympians from all over the world as well as local riders, were held Thursday through Sunday. But with the events lease canceled, it’s unclear if any more eventing competitions will be held at the site.

Wylie said the problem was the broader legacy of the term “plantation,” not the specific history of the Unionville showgrounds.

“In our very limited direct communications with Plantation Field, we never implied that anyone associated with the event had racist motivations,” Wylie said.

The request coincides with the removal of symbols, statues and names of buildings and streets considered racist across the United States. Plantations have been targeted because the industries carried out on the properties, such as growing cotton and tobacco, were underpinned by slave labor.

After pulling the lease for events, Culyer, the estate’s owner, resigned from the nonprofit’s board. He declined to comment for this article; Glaccum and other members of the Plantation Field Equestrian Events said they would not comment before this weekend’s trials ended, and they did not answer messages following up on Monday. 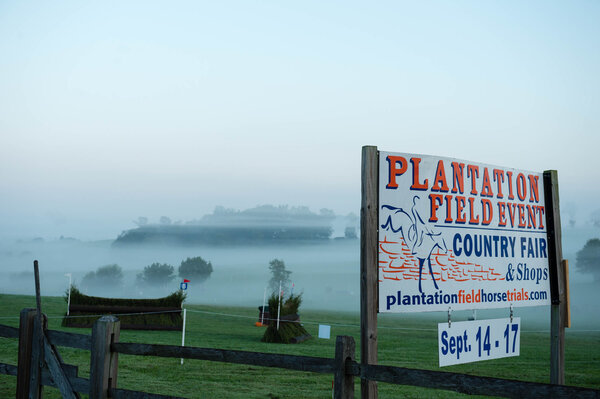 Both the chief executives of the Eventing Association and Equestrian Federation said they would review the names of other sites where events are held to check for any offensive references before deciding on any potential further action.

After the announcement that future events, including trials in future years, at the site had been called off, anger exploded across equestrian social media, including calls for a boycott of Eventing Nation for its role in contributing to the termination of the celebrated horse competition. But other riders and fans have criticized Walker’s decision to shut down instead of changing the name, saying whatever the origin, the word’s painful connotation means it must change.

For some Black riders, the estate’s refusal to consider a name change is another example of people in a historically white sport being out of step with change in society. According to data from the United States Equestrian Federation, the organization that governs American horse sports, almost 90 percent of its 185,000 members identify as white.

“The fact that this was met with blame, ridicule and misplaced anger shows one, they’re not ready to change,” said Abriana Johnson, who in 2019, started Young Black Equestrians, a podcast to discuss issues of representation in the sport. “And change is on the horizon.”

It’s not the first example of a call for inclusivity in the sport. In June, a series of articles across multiple equestrian news sources, including Eventing Nation and The Chronicle of the Horse, shook the industry with demands it reckon with its issues of diversity and inclusion, including from Sophie Gochman, a prominent young hunter jumper rider. The sport is “an insular community with a gross amount of wealth and white privilege,” Gotchman, who is white, wrote

Some Black riders say they recall instances in which people in the sport asked if they were grooms, rather than competitors, or expressed surprise about their riding skills or asked if their hair could fit into helmets. “You can allow people in and repeat these microaggressions, which eventually make them not want to do the sport anymore,” said Caitlin Gooch, a co-founder of the Young Black Equestrians podcast.

In response to public calls for addressing racial inequity, the Equestrian Federation and Eventing Association each formed plans to address diversity and inclusion, including committees and trainings for staff.

Yet others in the deeply traditional sport, and in Unionville, have derided criticism as unfair and defended the Plantation Field owners for supporting their communities.

“In this quibble about a name that had nothing to do with slavery in an area that was Quaker and abolitionist, they were looking to cause problems rather than solutions,” said Jim Graham, who lives two miles from the farm and is publishing a book about the area.

While some corners of the horse world have resisted change, others have not. In July, Gooch, the podcast co-founder, noticed that several horses registered in the American Quarter Horse Association studbook had names with racial slurs — including relatives of Gooch’s own horse. When she reached out in July, the association responded by removing the offending names from its studbook.

Gooch made changes to her own horse’s studbook entry too, adding three letters to his name: BLM.

Horse racing: With blinkers on, Aramaayo charges to victory in $1m Kranji Mile