Home » Sports » Carlo Ancelotti Would Like to Talk About Crosby

Precisely 51 seconds elapse between pressing “record” on Zoom and Carlo Ancelotti asking the question that, according to those who work with him, is never far from his lips these days. “Do you know Crosby?” he says, leaning forward in his chair. It is very important to Carlo Ancelotti that you should know about Crosby.

Until the turn of the year, Ancelotti was one of the unlucky ones: He was someone who had never been to Crosby. He had been to Liverpool a few times, of course — as manager of Chelsea and Real Madrid and Napoli — but he had never had the chance, on those flying visits, to venture much further than his team’s hotels.

In the first few weeks after taking the job as Everton manager last December, though, Ancelotti and his wife had to set out to find a place to call home. They did not want to live in one of the luxury apartments in the city’s center: They have three dogs — a Pomeranian, a Jack Russell/Poodle cross, and one of lineage Ancelotti has not yet committed to memory — and so prefer a bit of open space.

He wanted somewhere comfortable, not especially ornate or flashy or grand, and quiet. His days, he said, tend to be spent at the training facility, and his nights with family. He does not crave nightlife.

But nor did he want a long commute from one of the essentially fortified villages south of Manchester that constitute North West England’s footballer belt. All of which led someone at the club to recommend Crosby — on the coast, just outside the city, refined but not knowingly exclusive — as a happy medium. 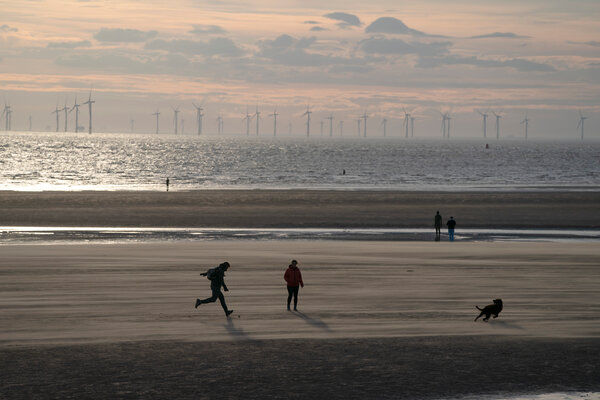 Ancelotti and his wife were smitten. In the intervening months, a colleague jokes, the 61-year-old Ancelotti has seemingly taken on an unofficial role as Crosby’s minister for tourism. “It’s a beautiful place,” he said. He got to know it especially well over those long spring months of lockdown, walking his dogs along the water. Ever since, he has been keen to alert others to Crosby’s charms.

“It’s close to the sea,” he said. “There’s a beautiful beach. A long beach. There is really nice cycling, really nice walks. You can walk all the way to Formby on the coastal path. There are the Gormley statues, 100 of them, on the beach. I really like it.”

Hearing Ancelotti — this stylish, urbane Italian whose glittering career has been spent almost exclusively in one or other of Europe’s great cities, from Rome to Milan, Milan to London, London to Paris, and on to Madrid and Munich — spend the days before the season’s first Merseyside Derby evangelizing the charms of Crosby is, even for someone who has been to Crosby and likes it very much, something of a surprise.

But then Ancelotti is not an easy man to fit into a stereotype. He is a man who has devoted his life to soccer, and yet he did not miss it at all during lockdown, happily spending time doing other things.

He is a manager who has won almost everything — who has more right than most to be considered one of the finest coaches of his generation — but who has never tried to build up a myth of his own greatness. Instead, he presents himself as a sort of midrange human resources executive.

In an age when soccer is in thrall to the cult of the manager, he resists the idea that it should be his identity. He is, he said, not a Manager; he is just someone who does that as a job.

In a culture when most of his peers cultivate an image of relentless obsession, Ancelotti is refreshingly, and almost heretically, three-dimensional.

This week, for example, Ancelotti’s mind might have been filled with thoughts of Saturday’s derby against Liverpool. Everton has not beaten its city rival in the Premier League in a decade, but it goes into this weekend’s fixture top of the nascent table, unbeaten this season, its neighbor wounded by a humiliating 7-2 defeat against Aston Villa last time out.

Ancelotti could have been forgiven, then, for wanting to talk only about the work he has done to revive Everton, the promise his team is showing, the renewed sense of optimism and ambition he has fostered.

But — though he happily discussed all of that — he was also happy to talk about, in no particular order: the origins of and appropriate nomenclature for Parmesan cheese; whether dogs bark in a specific language; the Netflix documentary series “The Cuba Libre Story”; “Game of Thrones”; and, of course, Crosby.

None of this is irrelevant to understanding how it came to be that Ancelotti, winner of three Champions League trophies and coach of some of the world’s finest teams, finds himself — at 61 — trying to restore Everton to its former glories, and doing a far better job of it than many expected.

In a way, Everton is an unusual coda to a career. Most managers spend their early years at “project” clubs, trying to shape a middling power into a showcase of their talents, and then take their reward later on, in the form of the chance to take charge of one of the game’s superpowers.

Ancelotti at Everton somehow inverts that pathway. It is 21 years since he took charge of Juventus, after cutting his teeth at Reggiana and Parma — the two sides, it turns out, of the great Parmesan cheese debate, the only subject on which Ancelotti feels the need to choose his words especially carefully — and he has had a seat at European soccer’s top table ever since.

Now, though, he finds himself on the other side of the divide. The Everton job, he said, is not so different than it appears from the outside. “It is exactly the same,” he said. The fundamental challenge a manager faces is that all of the players want to play. “It doesn’t matter if they earn a lot of money, if they are famous,” he said. “They want to play. That is the good aspect of this world.

“I have managed superstars — Cristiano Ronaldo, Zlatan Ibrahimovic — but they are superstars outside the training ground. The atmosphere outside builds the superstar. In the dressing room, they are exactly the same. At the end, I have to manage people, not players. They are not players: They are people who play football. I am not a manager. I am a man that works as a manager. I think this is an important point.”

However dazzling a player’s talent, however vast their profile, however high their ambitions, his task is still to build a rapport with them, to “manage them when they are sad,” to tell them to “celebrate their successes and manage their defeats,” to convince them to believe in his ideas, to persuade them to share their thoughts with him. That reciprocity, he said, is crucial. “I got a lot of my ideas from the players,” he said.

He is there to provide balance. Last season at Everton was a tortured one; he needed to restore faith (though he demurs from the idea that he actually did it). Now that the whole club is floating on air, he has to prevent his players from getting carried away.

This is all exactly what he did at Real and A.C. Milan and at Bayern Munich. What is different now, he concedes, is the context. There are, in Ancelotti’s worldview, two types of club: company clubs and family clubs. He has, it is no surprise to learn, largely worked at company clubs. There, the job is to arrive and to win.

At family clubs, the task is different. “It is to build something, to leave your stamp on a team,” he said. “You live better, work better in a family club. You can be more yourself. The target for every manager is to train the top teams. But also to fight to build a top team can be a great motivation.”

Ancelotti is relishing that challenge, and he is meeting it quite nicely, as the burgeoning devotion to him among Everton’s fans demonstrates. But, tempting though it is to frame it as a story of a manager finding a new lease on life in a new and different project, such a reading would not be entirely accurate.

One of the things Everton’s players appreciate most about Ancelotti, by all accounts, is that even though he demands complete focus at work, he does not engage with them solely as footballers. He is as likely to pull them aside to ask if they have seen anything interesting on television as he is to offer some morsel of tactical advice.

“Some managers do have that obsession to try to find something different,” he said. “But you can be tired of football if you have the obsession of football.” That is not a weakness, a shortcoming. It is a strength. His sport, and his work, are important to him, but they are not the only things that are important to him. Other things matter, too. Now: Do you know Crosby?