Leonard’s family said in a statement that he had experienced many ailments in recent years, but they did not provide the cause of death or say where he died. He had been living with his wife, Nancy (Root) Leonard, in suburban Indianapolis.

“He has meant as much as anyone in the state of Indiana when it comes to the game of basketball,” Mike Woodson, who played for Indiana University in the late 1970s and became its head coach this season after many years in the N.B.A., said in a statement. “He played the game with great flair. He coached with undeniable passion.”

Leonard was known as Slick. A 6-foot-3-inch guard, he was a fine playmaker in his seven seasons in the N.B.A. But his nickname wasn’t derived from his savvy on the court.

As he once told the story to Carmel magazine, an Indiana monthly, while playing for the Minneapolis Lakers in the 1950s he was involved in a game of gin rummy with the team’s star center, George Mikan, on a preseason bus trip. “I blitzed him,” Leonard recalled, “and one of the players said that I was too slick. It stuck.”

Leonard was an analyst and color commentator on Pacers broadcasts for some 35 years, beginning on television in 1985 and later moving to radio. He injected a colorful note with his exclamation “Boom, baby!” after an Indiana player hit a three-point shot.

William Robert Leonard was born in Terre Haute, Ind., on July 17, 1932, one of three children of Raymond and Hattie Leonard. His father dug ditches during the Depression. “We used to stand in commodity lines, and they would give you a few cans of food and some flour,” he recalled in “Boom, Baby! My Basketball Life in Indiana” (2013, with Lew Freedman).

Leonard was an outstanding basketball and tennis player in high school and then played for three seasons at Indiana University. His free throw with 27 seconds remaining gave the Hoosiers a 69-68 victory over Kansas in the 1953 N.C.A.A. championship game. He was named a third-team All-American in 1953 and a second-team All-American in 1954 by The Associated Press and was chosen for Indiana University’s all-century team.

Leonard was selected by the original Baltimore Bullets as the 10th pick in the 1954 N.B.A. draft, but the Lakers obtained his rights in a dispersal draft later that year when the Bullets franchise folded. After serving in the Army, he joined the Lakers in 1956. He played for them for four seasons in Minneapolis and one season, 1960-61, after they moved to Los Angeles.

His best season came in 1961-62, when he averaged a career-best 16.1 points and 5.4 assists with the expansion Chicago Packers. He was a player-coach in 1962-63 with Chicago, which had changed its name to the Zephyrs.

When the team moved to Baltimore and became the Bullets (the second franchise by that name) in the 1963-64 season, he was the full-time coach. But he resigned after posting a losing record. 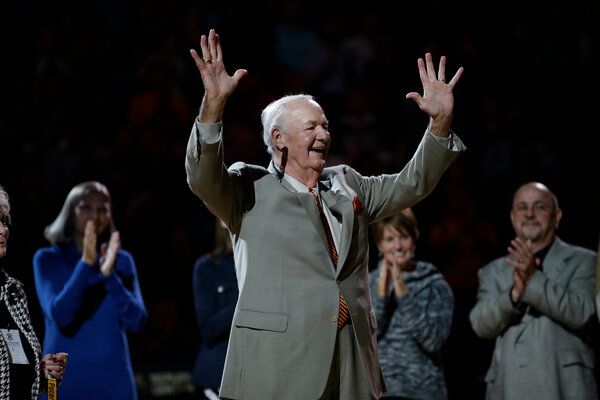 Leonard’s Pacer teams won 529 games and lost 456. He was voted the A.B.A.’s all-time most outstanding coach by a national sportswriters and broadcasters association.

A banner at the Pacers’ Bankers Life Fieldhouse honors Leonard with the number 529.

The Pacers and three other A.B.A. teams that joined the N.B.A. before the 1976-77 season were stymied by financial burdens imposed by the league — essentially the cost of their entry. Leonard and his wife turned to TV to boost ticket sales.

“If it weren’t for Slick, this franchise wouldn’t be here,” the Boston Celtics’ Hall of Fame forward Larry Bird, who had played for Indiana State in Terre Haute and later was a coach and president of basketball operations for the Pacers, told The New York Times in 2000. “I can remember in 1977, he had a telethon. I can remember being glued to the TV watching him. He was singing ‘Back Home in Indiana,’ trying to do everything to sell season tickets. I know the history behind the Pacers, and most of the history is Slick Leonard.”

COVID-19 causes Gophers to cancel game with No. 18 Wisconsin – The Denver Post