Home » Sports » At the Australian Open, Bianca Andreescu Is the Great Unknown

MELBOURNE, Australia — As Bianca Andreescu vaulted from No. 152 in the world to the United States Open champion during 2019, she appeared to be playing with a tennis angel on her shoulder.

And then good fortune left Andreescu, the 20-year-old Canadian, shortly after she lifted that U.S. Open trophy.

Andreescu sustained a torn meniscus that October. Then came the coronavirus pandemic, which, combined with the knee injury, kept her from competing for all of 2020. She trained through the fall and into the new year to hit the ground running upon landing in Australia. Then her coach tested positive for the virus shortly after he arrived on a flight from Abu Dhabi, sending Andreescu into a hard lockdown for 14 days because of their contact. She pulled out of an Australian Open warm-up tournament last week rather than risk injury by doing too much too soon.

“It’s super easy to ask yourself: ‘Why, why, why? Or what is the reason?’” Andreescu said recently as her quarantine was winding down. “Some of these things you cannot control.”

Andreescu was one of 72 players who could not leave their hotel rooms, even to train, for two weeks. Several former Grand Slam winners and 21 women over all in the main draw were classified as close contacts to those who tested positive for the coronavirus after landing in Australia, which put them in them hard lockdown.

Women’s tennis has been something of a free-for-all for years. Factor in a forced lockdown and the return of a player who a year and a half ago seemed to have limitless potential, and the uncertainty becomes nearly unprecedented.

A dozen women have won a Grand Slam singles title over the past four seasons. At the French Open in October, Iga Swiatek, 19, of Poland, entered the tournament ranked No. 54 and won the championship. Only Naomi Osaka of Japan and Simona Halep of Romania have won more than one Grand Slam title since 2017.

But no one embodies that uncertainty here at the 2021 Australian Open more than Andreescu, who passed her first round test on Monday when she won her first match in 15 months, a three-set nail-biter against Mihaela Buzarnescu of Romania. 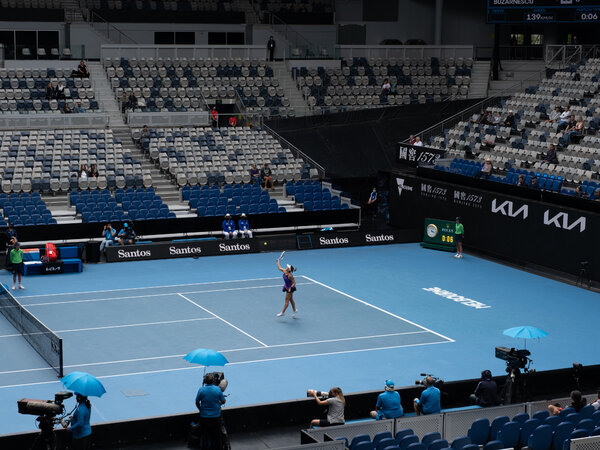 There were moments when Andreescu created shots and found the unseen angles, and plenty of others when she looked overwhelmed by a player ranked 138th in the world. She faces Hsieh Su-wei of Taiwan on Wednesday (Tuesday evening, Eastern time).

To Mary Carillo, the former player and longtime tennis analyst, Andreescu is among the most compelling players in the tournament. Carillo compared her to Juan Martín del Potro, who beat Roger Federer to win the U.S. Open when he was just 20, then sustained a series of injuries and never fulfilled the promise of that triumph.

“When you see players like Juan-Martín and Bianca burn a hole in the sport the way they did, you know they’ve got the goods,” Carillo said. “You want to watch them put their games up against the very best. You know they can win majors. You want them to hang around and prove it was real, time after time, year after year, become one of the true greats.”

Everyone in tennis knows Andreescu has talent to burn. She has power from the baseline and on her serve. She has the athleticism to chase down balls in the corners. At any moment, from any spot on the court, she can cut a slice with so much spin it dances when it lands. All this, plus the experience of winning a Grand Slam title, and she has only played about 50 WTA singles matches.

But coming to Australia, Andreescu had not played a match since October 2019. The inactivity would leave most players with little more than a puncher’s chance for success. Andreescu, though, has shown a freakish ability to shake off rust and play deep into tournaments. A back injury kept her out of competition for two months in the fall of 2018. When she came back she won two titles on the lower tier I.T.F. circuit.

In 2019, an injury to her right shoulder largely sidelined her from April until August. She returned for the Rogers Cup in Toronto, one of the most high profile tournaments outside of the four majors, and won after Serena Williams retired from the final with back spasms four games into the match. Then she reeled off another seven consecutive wins and became the U.S. Open champion.

That is not normal. Angelique Kerber of Germany, the three-time Grand Slam winner, said that when injuries cause long layoffs, it can take months to find the motivation to get on court and go to your limit. “I think that’s the hardest challenge,” Kerber said.

Andreescu can burn hot. She breaks rackets sometimes in practice, though fewer than she used to. She said she cried Sunday night in anticipation of her first round match here in Australia.

The first 48 hours after she learned that her coach, Sylvain Bruneau, had tested positive were tough to grapple with. As she and others on her team continued to test negative, Andreescu snapped back into preparation mode.

She did strength and fitness sessions on the stationary bicycle in her room with her trainer over Zoom. Her coach, who has remained healthy, put her through shadow hitting sessions, allowing her to work on her footwork. A devotee of visual imagery training, she spent hours imagining herself playing matches.

She watched her matches from 2019 and reliving those wins boosted her confidence. She also read — Charles Duhigg’s “Smarter Faster Better: The Transformative Power of Real Productivity,” and Michio Kaku’s “Physics of the Future: How Science Will Shape Human Destiny and Our Daily Lives by the Year 2100” — and played Call of Duty and NBA2K on her Xbox. She fiddled around with her new hobby, composing music.

She watched the 2020 U.S. Open and the French Open on television with a mix of hurt and hope. Not being on the court bothered her, but as she took in the action, she pictured herself in that moment again and it felt good.

And on Monday, when the two-hour, three-set test was over, she sunk into an ice bath and considered the silver lining in this first, uneasy duel. “Those matches are super good for me,” she said. It really shows that I can scramble when I really need to, or if there is some pressure I can dig my way through it somehow.”

The CU Buffs miss Nebraska — in more ways than one

Here's how rings for the Super Bowl are made