Home » Sports » An Unlikely Champion Wins the French Open, and Thanks a Mentor

PARIS — Hand pointing to the sky, the new French Open champion Barbora Krejcikova gave credit where she knew it was due on Saturday.

“I hope she’s happy,” Krejcikova said of Jana Novotna, the former Wimbledon champion who died of cancer in November 2017.

In Krejcikova’s view, all of “this” — the surprise run to a Roland Garros title — would not have happened without Novotna’s influence on her career at a critical phase: the transition from juniors to the much more selective professional game.

It was good fortune that Novotna was from Brno: the same Czech city as Krejcikova. But Krejcikova and her family made their own luck, too. She showed up with her parents at Novotna’s home in 2014 with a letter of introduction and a desire to find a tennis mentor who understood both the micro and macro of what it took to become great.

The visit was her mother’s idea, but Krejcikova, then 18 and recovering from a recent illness, made her own case, and Novotna, to her surprise, was receptive.

“She was just very nice, very warm,” Krejcikova said on Saturday. “She told me: ‘I have a court on Thursday in this club at this time. If you want to come, you can come. We can look at you, have a hit. We’re just going to see what’s going to come.’”

Krejcikova told her that she had been ill. 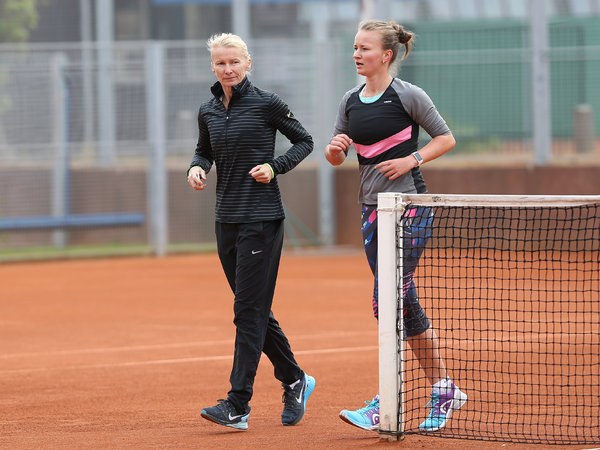 Novotna agreed to not only counsel her but also coach her and follow her on the circuit. Novotna’s contacts as a longtime leading player meant that Krejcikova had access to some quality hitting partners.

“We were playing the legends tournament here at Roland Garros a few years ago, and Jana said, ‘Come hit with this girl I’m coaching,’” Martina Navratilova said on Saturday. “And I thought Barbora had good talent, but you still never think that it’s going to lead to something like this. She didn’t have any obvious weapons, but her brain is her big weapon. She has got the good hands. She has got the variety and then the brain to know when to use it.”

Novotna, who died at 49, had variety and a sharp mind, too. She was a graceful mover with a one-handed backhand, committed to attacking the net behind chipped approach shots and then hitting angled volleys and overheads. It was a high-risk, eye-catching game and, like Krejcikova, she excelled in doubles, but her nerves betrayed her in her biggest singles matches through much of her career.

In the moment that long defined her, she cracked and lost a big third-set lead in the 1993 Wimbledon to Steffi Graf. There should have been no shame in losing to Graf on any surface, but Novotna knew she had not done her own talent justice, and ended up crying on the Duchess of Kent’s shoulder during the trophy ceremony on Centre Court.

Krejcikova took a different path. Though she is 25, she has had most of her success in doubles and may have more when she plays for the French Open women’s doubles title on Sunday with her partner Katerina Siniakova.

But this was only her fifth Grand Slam singles tournament, and she handled the inevitable pressure with aplomb, saving five set points in the opening set of her straight-set victory over the 17-year-old American Coco Gauff in the quarterfinals and then saving a match point against Maria Sakkari in the semifinals before fighting through the momentum shifts of a three-set final against Anastasia Pavlyuchenkova on Saturday.

“I think Jana, who is well known for the emotional breakdown against Steffi and then winning Wimbledon, would have just been so impressed by Barbora’s composure,” said Rennae Stubbs, the former No. 1 doubles player who knew Novotna well and was another of Krejcikova’s early practice partners on tour. “Throughout the entire tournament, she just never looked stressed, and to be able to do that under these circumstances for somebody who had never gone through something this monumental is pretty extraordinary to be honest.”

There were rare moments of agitation, including one shout to her player box during Saturday’s final, but Stubbs is correct that Krejcikova’s calm, focused demeanor was the rule at Roland Garros. Her pacing and breathing between points were measured; her gaze quickly went back to her strings or the clay after a point was completed. But she also showed touching flashes of humanity: applauding Gauff’s and Sakkari’s winners at critical phases of both matches.

Her march to the final was nowhere near as smooth as it often looked. She felt overwhelmed before playing the American Sloane Stephens in the fourth round, crying before taking the court and speaking with her sports psychologist. She consulted her again before her victory over Sakkari and victory over Pavlyuchenkova. It was all new territory for Krejcikova, who had not been past the fourth round of a major tournament in singles before.

“I was a little bit panicking; I really wanted to win,” she said. “On the other hand, I knew that if I really want to win, I’m just going to put so much pressure on myself that it’s not going to happen. We had the conversation about this. She just told me just to go and enjoy. We spoke about how to talk to myself, what to do when I’m going to feel nervous on court, just be happy that I’m actually there, all of this. That I’m already in the finals, it’s a big achievement that nobody really expected, not even me. I didn’t expect it as well.”

What also helped was her experience in doubles. She and Siniakova also won their first Grand Slam final together, taking the title at the French Open in 2018 on the same center court where she won on Saturday.

Krejcikova thanked Novotna after that victory, too, and on Saturday she reached a much bigger audience with the same message and the same hand pointed to the sky. This time, she received the champion’s trophy from Navratilova, who grew up in the Czech Republic before emigrating to the United States and was close with Novotna.

Navratilova has shaped champions’ careers, too. It was at her suggestion that the future No. 1 Maria Sharapova, whom she had spotted at a Moscow clinic, moved to Florida with her father, Yuri, to pursue a tennis career. “It’s a small world, and you will touch many people along the way,” Navratilova said. But she also knows how long the odds are and how many prodigies, even with the right advice, do not make the transition to the highest level.

She had agreed two months ago to present the trophy. She said she began watching the singles draw more and more closely as Krejcikova progressed.

“I started thinking, Oh, my God, she could get to the final — and then it was, She could win the thing,” Navratilova said with a laugh. “I didn’t tell Barbora. She didn’t know I was doing the ceremony.”

Predestined? Navratilova is not so certain, but she, like so many on Saturday, experienced a full-circle feeling as well as mixed emotions.

“It was a beautiful victory,” Navratilova said. “But I really so wish that Jana could have been here to see it.”