Home » Politics » Who will replace Boris Johnson? The ten candidates battling to become the next PM 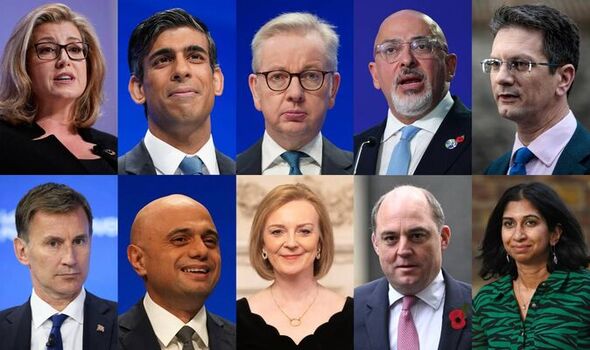 The ex-Cabinet minister triggered the demise of Mr Johnson by announcing last Tuesday on Twitter that he was quitting as Health Secretary. Mr Javid revealed yesterday he took the decision after attending a prayer meeting where the preacher talked about the importance of integrity.

Mr Javid, 52, launched his bid for the top job with a plan for £39billion of tax cuts, which he says will create growth. The former Chancellor said he does not believe in unfunded tax cuts and will set out this week how he intends to pay for the plan.

He also wants to reverse the 1.25 per cent increase in National Insurance, which was brought in while he was Health Secretary to cover the cost of clearing Covid backlogs. Mr Javid said the tax was “fair and right” as recently as April but now says he probably would not have introduced it if he had still been in charge of the Treasury.

Setting out his tax plans, Mr Javid said: “I’ve always believed in free markets, in low taxation, in light regulation as the conditions that are necessary for growth.

“It was true 20 to 30 years ago, it was true under Margaret Thatcher, and it’s true now, because it’s how economies grow and how they work.”

He ruled out more Covid lockdowns but did not close the door to a shutdown for ­different diseases.

Mr Javid also said he backed the Rwanda migrant deportation plan, would stick to the Government’s climate change target to get to net-zero emissions by 2050 and keep the BBC licence fee. A Scottish independence referendum cannot be ruled out “forever” but the once-in-a-generation promise made when the vote was held in 2014 should be stuck to, he said. 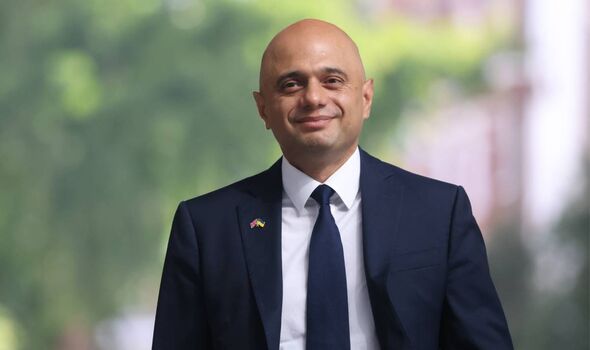 The former Chancellor, who quit minutes after Sajid Javid on Tuesday evening, already has at least 27 MPs signed up as ­supporters, putting him clearly ahead of the other candidates.

Mr Sunak, 42, launched his campaign on Friday with a video posted on social media promising to “restore trust, rebuild the ­economy and reunite the country”.

He is unlikely to row back on his National Insurance tax hike, saying “comforting fairy tales” will only leave the country worse off in the future.

After steering the country through the pandemic by introducing the furlough scheme to support workers whose jobs were shelved, his public profile is higher than any of the other candidates. Mr Sunak’s allies said he will announce a “manifesto for ­women’s rights” that will set out his opposition to biological males being allowed to compete in women’s sport.

The father of two was always the front-runner to replace Mr Johnson until a row about his family’s tax affairs erupted earlier this year. Supporters say the scrutiny on Mr Sunak during that period means that “everybody knows everything about your background” and he is an “open book”. 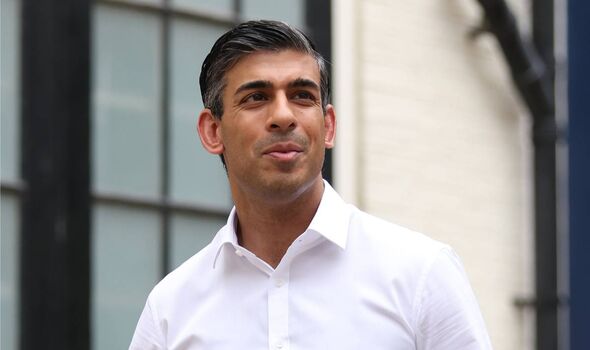 Mr Hunt launched his campaign with the surprise announcement that he had won the backing of Brexiteer Esther McVey and would make her his deputy prime minister.

The former Health Secretary, 55, who has been on the backbenches for the whole of Mr Johnson’s premiership, said choosing someone for the top job who has not been associated with the current Government would be a “strong way” for the Conservative Party to show it had been listening to voters.

He also said he would cancel Rishi Sunak’s planned rise in corporation tax and instead reduce the 25 per cent rate to 15 per cent.

And he pledged he would introduce a ­five-year business rates holiday for deprived areas, instead of taking Mr Johnson’s approach of focusing on big infrastructure projects to generate economic revival.

The Brexiteer, 49, launched her “PM for PM” campaign with a patriotic video setting out her vision for the country, and said she wanted less focus on the leader and more on the ship. The country’s first female Defence Secretary and a Royal Navy reservist has not set out the details of her policy platform but has already secured the backing of 18 MPs.

She issued a statement after being accused of being “woke” over trans rights. Ms Mordaunt insisted she has always “stood up for women” and claims people are using the row to attack her reputation. She promised she would “never” do anything to undermine women’s rights and “will continue to protect them”.

The backbencher, 49, has never held a ­government job but insists that makes him the “clean start” candidate. The former ­lieutenant colonel promised tax cuts to grow the economy but insisted he would deliver “sound” economics.

The MP said he would reveal the details of his tax policy in a 10-year economic plan. He said you cannot “simply look at each of these taxes as a one-off, you need to look at it as part of a whole”.

Mr Tugendhat refused to back a big pay rise for teachers and nurses, saying he did not want to get into chasing inflationary spirals. The Commons foreign affairs committee chairman insisted his military service shows he has the right leadership credentials.

He was wounded twice during a 10-hour firefight deep behind enemy lines when he and a small number of men called in a helicopter to evacuate them from northern Iraq.

The arch-Remainer insists he will not take Britain back into the EU but refuses to say whether he regrets voting to stay in the bloc.

Transport Secretary Mr Shapps, 53, says he has the numbers to make it on to the ballot and knows how to win the next general election. He said he wants lower taxes and a cut in “red tape” and promised an emergency budget to introduce an immediate 1p income tax reduction.

He is opposed to the planned rise in corporation tax to 25 per cent and vowed “that is a tax which will not go up”.

He added: “I believe in a lower tax, lower regulation, cut the red tape economy, where…the Government essentially actually lowers the barriers for individuals and ­businesses to achieve the best possible things they can in their own lives.”

Mr Shapps, who battled cancer and was once in a coma for a week after a car crash, said he would not indulge in backbiting against colleagues. He said one of Mr Johnson’s biggest failings was being “almost too loyal to people”.

The Chancellor, 55, said his plan for leadership includes lower taxes and a “great education” for all. Mr Zahawi also promises to “steady the ship” and “stabilise the economy” and called for fresh optimism about the country’s future.

Born in Iraq to a Kurdish family, Mr Zahawi came to the UK as a nine-year-old when his parents fled the regime of dictator Saddam Hussein.

Believed to be one of the richest politicians in the House of Commons, he helped found polling company YouGov after studying chemical engineering at University College London.

Mr Zahawi said Britain’s departure from the EU made it a “free nation” and it was time to take the opportunities this has afforded rather than just talk about them.

He promised to cut taxes for individuals, families and business – saying the current burden is “too high”.

The former Education Secretary also said he would focus on letting children be ­children by protecting them from “damaging and inappropriate nonsense being forced on them by radical activists”.

Attorney General Ms Braverman is popular among Brexiteers in the party, having played a key role in the European Research Group that was pivotal during the Parliamentary battles to take the UK out of the EU.

She was loyal to the Prime Minister but last week said he had handled matters “appallingly” in recent days and “the
balance has tipped now”.

She has vowed to cut taxes, suspend ­net-zero targets and finish Brexit.

Ms Braverman, 42, said there must be rapid and large tax cuts to ease the inflationary price rises.

The Cabinet Minister also says the ­all-consuming desire to achieve net-zero ­carbon emissions by 2050 must be shelved, warning the country does not “want to end up like the Germans, going cap in hand to Putin for heating and power”.

She also warns there must be no “backsliding” on Brexit and says that when the British people voted to take back control of their borders they didn’t expect European courts to strike down our decisions.

Ms Badenoch is little known outside Westminster but has been seen as a rising star within the party.

Elected to the safe Essex seat of Saffron Walden in 2017, Badenoch took just two years to join the front benches and was, until her resignation, a joint minister for levelling up and equalities.

She launched her leadership bid by promising “limited government” and “a focus on the essentials”.

The MP, 42, said she supported lower taxes “to boost growth and productivity and accompanied by tight spending discipline”.

Ms Badenoch is also not afraid to take on so-called woke warriors and warned people are “exhausted by platitudes and empty rhetoric”.

She thinks the UK is “falsely criticised” ­ as oppressive to minorities and immoral, because it enforces its own borders.

The Brexiteer said the country needs to “reinvigorate the case for free speech, free markets and the institutions that defend a free people”.

Foreign Secretary Liz Truss has pledged to reverse the controversial national insurance hike if made Tory leader, as she insisted she can be “trusted to deliver”.

She is widely expected to be a front-runner and promised to “start cutting taxes from day one” to help with the cost of living.

Ms Truss’s pledge to scrap the national insurance rise, which came into effect in April.

She argued “it isn’t right to be putting up taxes now”, and as leader she would take “immediate action” to assist with living costs.

And she would “get the private sector growing faster than the public sector, with a long-term plan to bring down the size of the state and the tax burden”.

She said: “Under my leadership, I would start cutting taxes from day one to take immediate action to help people deal with the cost of living.

“I would reverse the national insurance increase that came in during April, make sure we keep corporation tax competitive so we can attract business and investment into Britain, and put the Covid debt on a longer-term footing.”

Ms Truss said her plan would get the country back on track towards becoming a “high-growth and high-productivity powerhouse”.

She said she had “led the way” in making the most of Britain’s “new-found freedoms” outside the EU, but insisted “we can go further, whether it is doing more to champion innovation or charting our own course on regulation”.