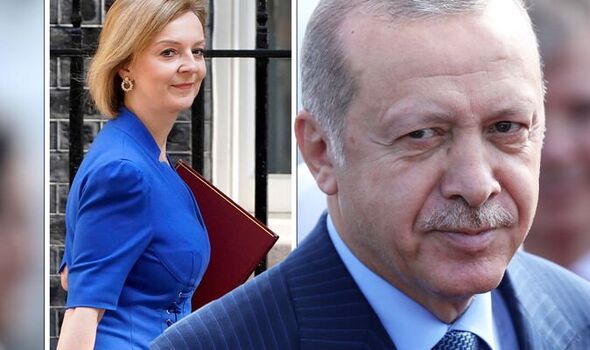 Mevlut Cavusoglu, the Turkish foreign minister, opened his official remarks by pointing out how trade with the UK has surged since Brexit.

He said that it is now worth $20 billion and is expected to grow further.

Mr Cavusoglu said: “The UK is now the third biggest trade partner after the USA and Germany and we are very keen to increase our trade.”

Ms Truss was in Ankara primarily to dicuss the war in Ukraine where she accused Russian President Vladimir Putin of “weaponising hunger”.

Britain and Turkey are at the hear tof Nato efforts to insure that Ukrainian grain can get out of the Black sea region to ensure the war does not lead to famine in Africa and other parts of the world with Ukraine the major supplier.

But answering questions Ms Truss, who was previously International Trade Secretary, said she believes the British Turkish relation will go from strength to strenth with trade and security.

She said: “It was a priority for me to visit Turkey because Turkey is a key strategic partner of the UK.

“We are having discussions on a great trade deal.”

Ms Truss highlighted that the deal would increase trade in services, agricultral products and manufacturing.

“Everybody has faced uncertainty over energy supply,” she added noting that it was one of the consequences of the recent Russian invasion of Ukraine.

Pelosi declines to call on Cuomo to resign: 'The governor should look inside his heart'

Staunch anti-Brexit Remainer wishes to return to UK – One time I wish I wasnt in the EU!