It was nearly impossible on Saturday to separate the tributes to Justice Ruth Bader Ginsburg from the immediate political jockeying over whether Republicans will force through a nomination with just 45 days until the election, after refusing to do so for months after Justice Antonin Scalia died in 2016.

With Republicans maintaining a 53-to-47 majority in the U.S. Senate, and using Vice President Mike Pence as a tiebreaker, President Trump has room to lose a few Republicans and still confirm a potential nominee.

Here’s how the key players in the Senate have indicated they would move on the vacancy on the Supreme Court:

I would not vote to confirm a Supreme Court nominee. We are 50 some days away from an election. 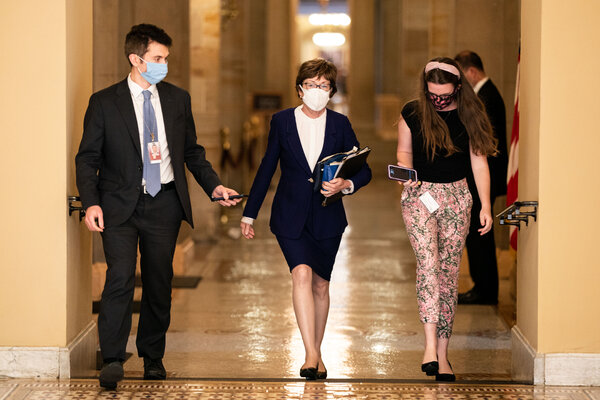 Senator Susan Collins, Republican of Maine, in an interview with The New York Times this month:

On sitting a Supreme Court justice in October: “I think that’s too close, I really do.”

The two biggest changes regarding the Senate and judicial confirmations that have occurred in the last decade have come from Democrats. Harry Reid changed the rules to allow a simple majority vote for Circuit Court nominees dealing out the minority. Chuck Schumer and his friends in the liberal media conspired to destroy the life of Brett Kavanaugh and hold that Supreme Court seat open. In light of these two events, I will support President @realDonaldTrump in any effort to move forward regarding the recent vacancy created by the passing of Justice Ginsburg.

If an opening comes in the last year of President Trump’s term and the primary process has started, we’ll wait till the next election.

If I were chairman of the committee and this vacancy occurred, I would not have a hearing on it because that’s what I promised the people in 2016.

This U.S. Senate should vote on President Trump’s next nominee for the U.S. Supreme Court.

(If) it is a lame-duck session, I would support going ahead with any hearings that we might have. And if it comes to an appointment prior to the end of the year, I would be supportive of that.

Senator Kelly Loeffler, Republican of Georgia, who faces re-election, in an interview on Saturday:

The constitution allows this process to keep moving forward and the president has every right to nominate someone, and leader McConnell has said that we will have a vote on the Senate floor on this, and I completely support that. We need to bring forward a conservative justice. Someone who will be a strict constructionist, who will protect innocent life, who will bring those Second Amendment cases and make sure we’re protecting our right to bear arms in this country, and we need to keep that process moving, regardless of it being an election year.

Senator Mitch McConnell, the Republican majority leader, who controls the legislative agenda of the Senate and can call for a vote on a nominee:

President Trump’s nominee will receive a vote on the floor of the United States Senate.

Under no circumstances should the Senate consider a replacement for Justice Ginsburg until after the presidential inauguration. Senator McConnell made his position clear in 2016 when he held Justice Scalia’s seat vacant for 10 months so he could deny President Obama an appointment — a goal he himself admitted.

The American people should have a voice in the selection of their next Supreme Court justice. Therefore, this vacancy should not be filled until we have a new president.

Mike Pence Brought Conservatives Home. What If They Don’t Need Him Anymore?

Biden’s response to voters concerned about socialism: ‘I beat the socialist.’