Alex Salmond 'could be thorn in Sturgeon's side' warns expert

Nicola Sturgeon cast doubt on Mr Salmond’s electoral hopes the day after the former First Minister announced the creation of his new Alba Party. Ms Sturgeon questioned the “appropriateness” of Mr Salmond returning to the political scene after he faced an inquiry on allegations of sexual harassment. Speaking from the campaign trail, the Scottish First Minister said: “I take no pleasure whatsoever in saying this but I think there are significant questions about the appropriateness of his return to public office given the concerns that have been raised about his behaviour previously but that’s for voters to judge and decide.

“This is an election. We live in a democracy. For my part, in this campaign, I am focused on the interests of the country.”

The First Minister insisted the Scottish Election 2021 marked an important date for politics in Scotland in light of the coronavirus pandemic and the economic consequences the health crisis had on the nation.

Asked about Alex Salmond’s claims about his Alba Party snatching a “supermajority” in spite of its early age, Ms Sturgeon said: “I know Alex Salmond very well. He makes big claims which often don’t stand up to scrutiny.

“Alex Salmond is a gambler. It is what he enjoys doing. But this is not the time to gamble with the future of the country.” 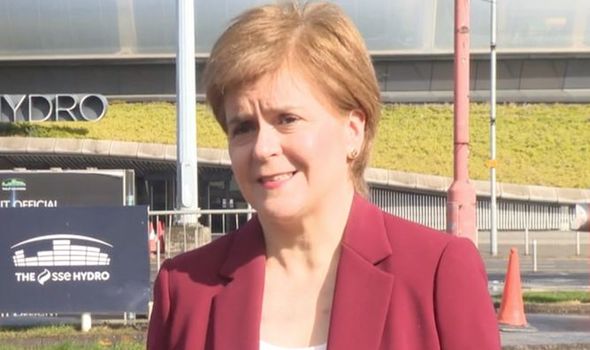 Former Scottish justice secretary Mr MacAskill is the first big SNP name to defect to the new party, although former SNP councillor Chris McEleny is standing as a candidate for the Alba Party in the upcoming Scottish Parliament elections.

The National reports that the East Lothian MP wrote to his staff: “I will be joining the newly-formed Alba Party to deliver than supermajority for independence through the list vote and which I believe’s essential to achieving our nation’s independence.”

The SNP has called for a by-election in response, and described Mr MacAskill’s departure as “somewhat of a relief”.

The party’s Westminster leader Ian Blackford said: “After yesterday’s events this is the second least surprising news in Scottish politics.

Scotland: IndyRef2 would be an 'absolute disaster' says MSP

“He has been an increasing embarrassment to many in the SNP and his departure is somewhat of a relief.

“That he is joining a party with serious questions to answer about its leader’s suitability for public office is no surprise.

“He should now resign his seat in the House of Commons to let a by-election take place immediately so the people of East Lothian can elect a new MP who will focus on their interests, rather than self-interest.”

DON’T MISS
Get over it Joe! Biden told to focus on present not past [Latest]
Brexiteer urges ‘rabbit in the headlights’ Johnson to QUIT as PM [Update]
Labour mocked over pro-EU candidate in Hartlepool by-election  [Insight]