Liz Truss is asked whether Emmanuel Macron is a 'friend'

Emmanuel Macron has realised “EU limitations” as he attended the inaugural summit for a new continental club in Prague, a Brexit-backing political commentator has claimed. The French President has formed a new group, known as the European Political Community, dedicated to advancing security and energy cooperation across the continent.

The organisation aims to bring together leaders from nearly every European country, except Russia and Belarus.

Political commentator Fraser Nelson wrote in The Telegraph: “From the British perspective all this should be seen as a bonus, even a breakthrough.

“The EU has been quite defensive since the Brexit vote, talking as if it is the only forum to discuss the continent’s future.

“Macron now accepts the EU’s limitations. Its mishandling of Turkey and Ukraine led to exasperation and disillusion – not just among prospective member states, but existing ones. The accession process is too painful, too slow. 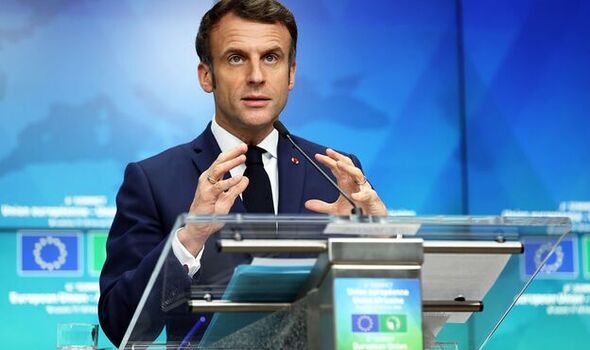 “The EU was in danger of having bad relations with all its neighbours, the UK very much included.”

The first meeting of the organisation was held in Prague and was also attended by Liz Truss.

Mr Nelson, who voted for Brexit in the 2016 referendum, explained how the UK Prime Minister was initially sceptical about the idea of having a new club for European nations.

He wrote: “The European Political Community is the chance for a fresh start. It’s a club with no diktats, just a forum to discuss security, migration and energy – and there’s much to discuss.

“The new alliance was set not so much by Macron but by the spontaneous, bottom-up reaction to Russia’s invasion of Ukraine.

“A normally divided continent suddenly discovered how much it had in common, as nation after nation offered to take refugees and send weapons to Kyiv – even at the cost of far higher fuel bills.

“It was a defining European moment.

“But it was not, really, an EU moment. It was Britain that led the way in arming Ukraine, and the fuel crisis now puts Norway in central focus: Europe needs it to pump and export more.

“Cheap Turkish drones being sold to Kyiv are proving vital to the war effort (they get shot down quickly, so cheap drones are viable in a way that pricier Western ones are not).

“So it matters that Recep Tayyip Erdoğan is happy to keep exporting them.

“Ukraine has been a reminder that non-EU countries are crucial in determining European affairs.”

Boris Johnson crumbles to EU as he ABANDONS Brexit masterplan