The shadow Brexit secretary, who has been an MP since 2015, beat front bench colleague Rebecca Long-Bailey and Wigan MP Lisa Nandy.

He described becoming leader as “the honour and the privilege of my life”. 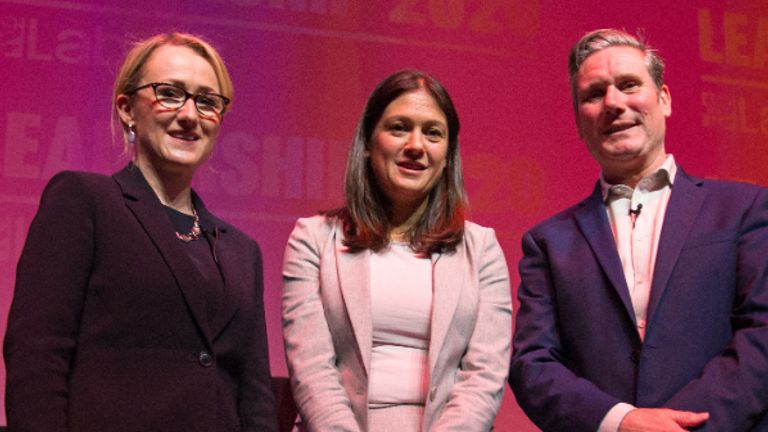 “I will lead this great party into a new era, with confidence and hope, so that when the time comes, we can serve our country again – in government,” Sir Keir said.

Sir Keir, who is named after Labour Party founder Keir Hardie, was widely expected to win the three-month contest.

Having been seen as the early favourite, he built up unassailable levels of support among Labour MPs and local constituency parties before the ballot of members opened in February.

Ms Long-Bailey congratulated Sir Keir, saying he would be a “brilliant prime minister” and “I can’t wait to see him in Number 10”.

“We live in extraordinary and uncertain times, and it is now up to all of us to support Keir as best we can,” she said.

Ms Nandy said: “Congratulations to Keir and his team. We have been competitors in this contest but never opponents, and he will have my full support in the challenges that lie ahead.

“A united and strong Labour Party could not be more important than at this moment.”

Angela Rayner, meanwhile, has been elected as the party’s new deputy leader.

“I want to thank everyone who took part in this election, and all those who have supported me through the campaign. I promise that I will do everything I can to repay your trust,” Ms Rayner said.

“Things have dramatically changed in our country in recent months but our values remain the same, and more important than ever.”

Reacting to the result, Mr Corbyn said: “Being Labour Party leader is a great honour and responsibility.

“I look forward to working with Keir and Angela to elect the next Labour government and transform our country.”

A planned special conference to unveil the winners of both contests was cancelled due to the coronavirus pandemic.

The COVID-19 crisis – and scrutinising the government’s response – will be one of the big issues in Sir Keir’s early days as leader.

In his video message, Sir Keir said his election “comes at a moment like none other in our lifetime” because the COVID-19 pandemic has “brought normal life to a halt” but brought communities together.

He said: “I can see this happening, people coming together to help the isolated and the vulnerable, checking on their neighbours.

“So many volunteering for the NHS, millions of people doing their bit to stop this virus and to save lives.”

Sir Keir promised that Labour under his leadership would “engage constructively” with the government as it responds to the crisis, “not opposition for opposition’s sake”.

He continued: “Not scoring party political points or making impossible demands. But with the courage to support where that’s the right thing to do. But we will test the arguments that are put forward.

“We will shine a torch on critical issues and where we see mistakes or faltering government or things not happening as quickly as they should we’ll challenge that and call that out.”

He also apologised to the Jewish community for antisemitism in the party and promised to “tear out this poison by its roots”.

The issue dominated Mr Corbyn’s time as Labour leader. There were accusations – strenuously denied by Mr Corbyn – that the party’s leadership did not do enough to tackle the problem.

Another challenge will be working to put Labour in position to win a general election once more, having last succeeded in this task 15 years ago.

Allies of Sir Keir said ahead of the announcement that the scale of his anticipated victory would determine how far he is able to transform the party in his own image.

He is likely to announce his first shadow cabinet appointments on Sunday, with his choice of shadow chancellor seen as a strong indicator of the path he intends to forge.

This will be watched keenly by those within Labour, at Westminster and in the country at large.

Sir Keir has already said he intends to stick to many of Mr Corbyn’s flagship policies, like abolishing tuition fees and nationalising key industries.

Mr Corbyn opted to stand down after five years as leader after December’s general election.

A disastrous night for Labour saw the party register its worst performance at the ballot box since the 1930s.

Boris Johnson’s landslide victory was a far cry from two years prior, when Mr Corbyn defied expectations and ensured Theresa May lost the Tories’ parliamentary majority.

That proved to be the high point of his time as leader of the opposition, with Mr Corbyn serenaded with a rendition of “Oh Jeremy Corbyn” at Glastonbury.

He even reportedly declared to the festival’s founder that he would be in Downing Street by that Christmas.

In a message on his Facebook page, Mr Corbyn declared that he would not be quiet now that he is returning to the backbenches.

“I can assure you my voice will not be stilled,” he said.

“I’ll be out there campaigning for socialism, peace and justice, and I feel sure we’ll be doing that together.”

Sir Keir paid tribute to his predecessor, saying Mr Corbyn “led our party through some really difficult times and “energised our movement”.