The campaign arm of Senate Republicans had collected $181.5 million by the end of July — but spent 95 percent of it. A big investment in digital, and hyperaggressive tactics, have not paid off. 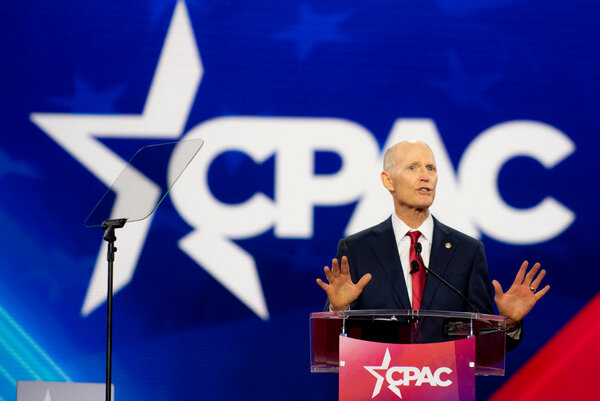 It was early 2021, and Senator Rick Scott wanted to go big. The new chairman of the Senate Republican campaign arm had a mind to modernize the place. One of his first decisions was to overhaul how the group raised money online.

Mr. Scott installed a new digital team, spearheaded by Trump veterans, and greenlit an enormous wave of spending on digital ads, not to promote candidates but to discover more small contributors. Soon, the committee was smashing fund-raising records. By the summer of 2021, Mr. Scott was boasting about “historic investments in digital fund-raising that are already paying dividends.”

A year later, some of that braggadocio has vanished — along with most of the money.

The National Republican Senatorial Committee has long been a critical part of the party apparatus, recruiting candidates, supporting them with political infrastructure, designing campaign strategy and buying television ads.

By the end of July, the committee had collected a record $181.5 million — but had already spent more than 95 percent of what it had brought in. The Republican group entered August with just $23.2 million on hand, less than half of what the Senate Democratic committee had ahead of the final intense phase of the midterm elections.

Now top Republicans are beginning to ask: Where did all the money go?

The answer, chiefly, is that Mr. Scott’s enormous gamble on finding new online donors has been a costly financial flop in 2022, according to a New York Times analysis of federal records and interviews with people briefed on the committee’s finances. Today, the N.R.S.C. is raising less than before Mr. Scott’s digital splurge.

Party leaders, including Senator Mitch McConnell, are fretting aloud that Republicans could squander their shot at retaking the Senate in 2022, with money one factor as some first-time candidates have struggled to gain traction. The N.R.S.C. was intended to be a party bulwark yet found itself recently canceling some TV ad reservations in key states.

The story of how the Senate G.O.P. committee went from breaking financial records to breaking television reservations, told through interviews with more than two dozen Republican officials, actually begins with the rising revenues Mr. Scott bragged about last year.

The committee had squeezed donors with hyperaggressive new tactics. And all the money coming in obscured just how much the committee was spending advertising for donors. Then inflation sapped online giving for Republicans nationwide. And the money that had rolled in came at an ethical price.

One fund-raising scheme used by the Senate committee, which has not previously been disclosed, involved sending an estimated millions of text messages that asked provocative questions — “Should Biden resign?” — followed by a request for cash: “Reply YES to donate.” Those who replied “YES” had their donation processed immediately, though the text did not reveal in advance where the money was going.

Privately, some Republicans complained the tactic was exploitative. WinRed, the party’s main donation-processing platform, recently stepped in and took the unusual step of blocking the committee from engaging in the practice, according to four people familiar with the matter.

The texts had been part of a concerted push that successfully juiced fund-raising, though it used methods that experts say will eventually exhaust even the most loyal givers.

One internal N.R.S.C. budget document from earlier this year, obtained by The Times, shows that $23.3 million was poured into investments to find new donors between June 2021 and January 2022. In that time, the contributors the organization found gave $6.1 million — a more than $17 million deficit.

Mr. Scott declined an interview request. His staff vigorously denied financial struggles, said some of the canceled television ads had been rebooked, and argued the digital spending would prove wise in time.

More Coverage of the 2022 Midterm Elections

“We made the investment, we’re glad we did it, it will benefit the N.R.S.C. and the party as a whole for cycles to come,” said Chris Hartline, a spokesman for Mr. Scott and the committee.

Yet as Republican chances to retake the Senate have slipped, a full-blown case of finger-pointing has erupted across Washington, with Mr. Scott a prime target. His handling of the committee’s finances has become conflated with other critiques, especially a flawed field of Republicans who have found themselves outspent on television.

Mr. Scott’s please-all-sides decision to stay out of contested 2022 primaries has been second-guessed, including by Mr. McConnell. Mr. Scott’s detractors accuse him of transforming the N.R.S.C. into the “National Rick Scott Committee” — and a vehicle for his presidential ambitions.

“The spending wouldn’t matter if the polling numbers looked better,” said Liam Donovan, a Republican lobbyist and N.R.S.C. donor. “To the extent the red wave is receding, people look for someone to blame.”

The financial fortunes of the group alone will not sink Republican chances in November. A super PAC aligned with Mr. McConnell has more than $160 million in television reservations booked after Labor Day.

Mr. Hartline dismissed those questioning the group’s digital spending as “disgruntled former staff and vendors.” He said the $28 million invested had tripled its file of email addresses and phone numbers and added 160,000 donors.

“Our goal is to build the biggest G.O.P. digital file to help the party now and in the future,” he said. He declined to discuss the texting scheme.

Mr. Hartline said the Senate Democratic arm has more money because it had not yet spent significantly on television. Mr. Scott, he said, had strategically spent early, with nearly $30 million on ads aiding Republicans through July.

That sum, however, is actually less than the $37.4 million the G.O.P. committee reported in independent expenditures for candidates as of the same date two years ago.

For months last year, the National Republican Senatorial Committee was far and away the nation’s biggest online political advertiser, outspending every other party committee combined and pouring money into platforms like Google at levels almost unseen except in the fevered final days of 2020.

The sums were so breathtakingly large — peaking at more than $100,000 a day on Facebook and Google — that some concerned Democrats began to study the ads, fretting that somehow Republicans had unlocked a new sustainable way to raise money online.

The Senate Republican bet had been this: By spending vast amounts early, the party could vacuum up contact information for millions of potential donors who could then give repeatedly over the coming months.