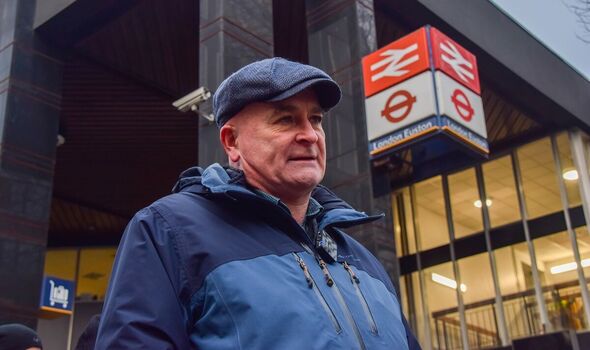 The RMT general secretary said a deal was “achievable” that could mean an end to the walkouts planned for the next few weeks. Support for the industrial action has fallen among his members and another union involved in the rail disputes has now agreed to accept a pay settlement.

“So we need some compromise on some of the conditions they’re putting on the offer and we’ll need an improvement in the pay offer. That is achievable, in my view.”

“I know that there are some very simple steps that the employers and ourselves could take together to get a solution to this. That means a common-sense approach – both sides get into a position where there’s some commonly held positions.

“And I think we could do that in the next period. And if that is done very quickly, we can consider the industrial action going forward.”

Steve Montgomery, who chairs the Rail Delivery Group, said: “No one wanted to see these strikes go ahead, and we can only apologise to passengers and to the many businesses who will be hit by this unnecessary and damaging disruption.

“We continue to urge RMT leaders to put our proposals to their members rather than condemning them to weeks of lost pay either side of Christmas during a cost-of-living crisis.”

Andrew Haines, Network Rail chief executive, said: “The RMT has deliberately chosen to try and ruin Christmas for millions of passengers and businesses.

“They’re also intent on inflicting a monumental act of harm on an industry still desperate to recover from post-Covid challenges by sabotaging a vital £100m programme of rail upgrades planned for Christmas Day and Boxing Day.

“The industry will do all it can to keep services running and projects on-track but serious disruption is inevitable given the RMT’s action.

“In talks over the months, we have sought to address all the RMT’s concerns by putting a decent pay rise on the table, guaranteeing a job for anyone that wants one, significantly raising base salaries for the lowest paid and offering a new, huge rail travel discount scheme for members, and their families.

“By any reasonable measure, we have put a fair deal on the table.”