Home » Politics » ‘Give it a rest, Nicola!’ Sturgeon pushes for new poll on independence 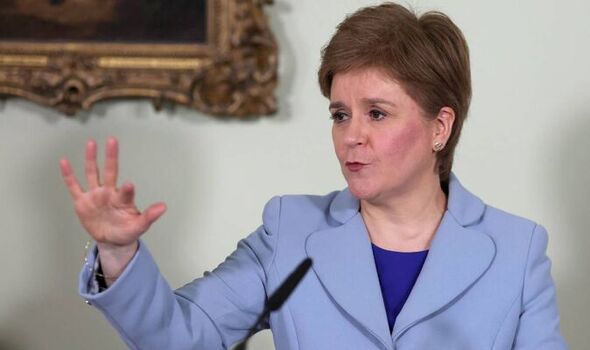 The Scottish First Minister kicked off a new campaign by making clear she was re-elected last May on a “clear commitment to give the people of Scotland the choice of becoming an independent country”. She released a series of supportive documents for the split which, she said, would help to put together a “full, frank and constructive” debate on a second vote for separation over the coming months.

Ms Sturgeon said that not being independent in recent years has been to Scotland’s “great cost”.

She said: “The very fact of just being independent, for any country in the world, doesn’t magically guarantee success. What it does do is put the levers that determine success into your own hands.”

Ms Sturgeon referred to economic and social differences between Scotland and other small countries, attributing the deficit to not having the full powers of an independent country.

She added: “Any country will face challenges and setbacks. The question is: what is the best system of governance to equip you to deal
with those?”

But in a press conference in Edinburgh yesterday, she failed to outline how a referendum would take place and indicated an update would be put before the Scottish Parliament before summer recess next month.

And during grilling from journalists, the First Minister also accepted an independent Scotland would have a hard trade border with England under her “Scexit” plans.

Ms Sturgeon has pledged to hold a referendum in 2023 but the UK Government has refused to co-operate.

The SNP wants Boris Johnson to grant a section 30 order, allowing a legally binding referendum to be held, as happened in 2014.

But Mr Johnson, speaking during a visit to Staffordshire, said: “The decision was taken by the Scottish people only a few years ago, in recent memory. I think we should respect that.”

Legal advice released last week contained no reference as to whether Holyrood would have the power to legislate for Indyref2 without the UK Government’s backing.

However, the First Minister insisted: “We must forge a way forward – if necessary without a section 30 order.”

Douglas Ross, Scottish Tory leader, added: “Pushing for another divisive referendum – possibly even an illegal wildcat referendum – is the wrong priority, at the worst possible time.

“Nicola Sturgeon should give it a rest and focus on the people of Scotland’s priorities.”

And Struan Stevenson, of Scottish Business UK, said businesses would “ignore her calls” for a second vote.

He said business didn’t want a repeat of the debate “soundly lost by the SNP in 2014…especially in the teeth of a bumpy pandemic recovery”.

I Approve This Message. Now, Remember Your Secrecy Envelope.

A Week Before the Election, Time Is Running Out to Vote by Mail