WASHINGTON — Judge Merrick B. Garland, President Biden’s nominee for attorney general, said on Monday that the threat from domestic extremism was greater today than at the time of the Oklahoma City bombing in 1995, and he pledged that if confirmed he would make the federal investigation into the Capitol riot his first priority.

Judge Garland, who led the Justice Department’s prosecution of the Oklahoma City bombing, told the Senate Judiciary Committee on the first day of his confirmation hearings that the early stages of the current inquiry into the “white supremacists and others who stormed the Capitol” seemed to be aggressive and “perfectly appropriate.”

He received a largely positive reception from members of both parties on the panel, five years after Senate Republicans blocked his nomination to the Supreme Court by President Barack Obama to fill the vacancy created by the death of Justice Antonin Scalia.

Judge Garland, 68, who was confirmed to the United States Court of Appeals for the District of Columbia Circuit in 1997, pledged on Monday to restore the independence of a Justice Department that had suffered deep politicization under the Trump administration.

“I do not plan to be interfered with by anyone,” Judge Garland said. Should he be confirmed, he said, he would uphold the principle that “the attorney general represents the public interest.”

Judge Garland also said he would reinvigorate the department’s civil rights division as America undergoes a painful and destabilizing reckoning with systemic racism.

“Communities of color and other minorities still face discrimination in housing, education, employment and the criminal justice system,” Judge Garland said in his opening statement. But he said he did not support the call from some on the left that grew out of this summer’s civil rights protests to defund the police.

“I regard my responsibilities with respect to the civil rights division at the top of my major priorities list,” Judge Garland said.

Discussing the threat of domestic terrorism, Judge Garland said that “we are facing a more dangerous period than we faced in Oklahoma City.”

He called the assault on the Capitol “the most heinous attack on the democratic processes that I’ve ever seen, and one that I never expected to see in my lifetime.”

In addition to an immediate briefing on the investigation, he said he would “give the career prosecutors who are working on this manner 24/7 all the resources they could possibly require.”

Battling extremism is “central” to the Justice Department’s mission, and has often overlapped with its mission to combat systemic racism, as with its fight against the Ku Klux Klan, Judge Garland said.

But the hearing was also a reminder of how politics hovers over so many of the high-profile issues that will confront Judge Garland if the full Senate confirms him, especially as the Capitol riot investigation touches on members of Mr. Trump’s inner circle and more defendants claim that they acted on former President Donald J. Trump’s command to stop Mr. Biden from taking office.

Asked by Senator Sheldon Whitehouse, Democrat of Rhode Island, whether the investigation into the Capitol riot should pursue people “upstream” of those who breached the building, including “funders, organizers, ringleaders or aiders and abettors who were not present in the Capitol on Jan. 6,” Judge Garland replied, “We will pursue these leads wherever they take us.”

Republicans focused primarily on two politically charged investigations from the Trump era: a federal tax investigation into Mr. Biden’s son Hunter Biden, and the work of a special counsel, John H. Durham, to determine whether Obama-era officials erred in 2016 when they investigated Trump campaign officials and their ties to Russia.

Judge Garland said he had not discussed the Hunter Biden case with the president, and he reiterated that the Justice Department would make final decisions about investigations and prosecutions.

“That investigation has been proceeding discreetly, not publicly, as all investigations should,” he said. He noted that the Trump-appointed U.S. attorney in Delaware had been asked to stay on and oversee the investigation into Hunter Biden.

“I have absolutely no reason to doubt that was the correct decision,” he said.

Responding to a question about Mr. Durham’s investigation, Judge Garland suggested that he would let the inquiry play out but avoided making any explicit promises about how he would handle it. 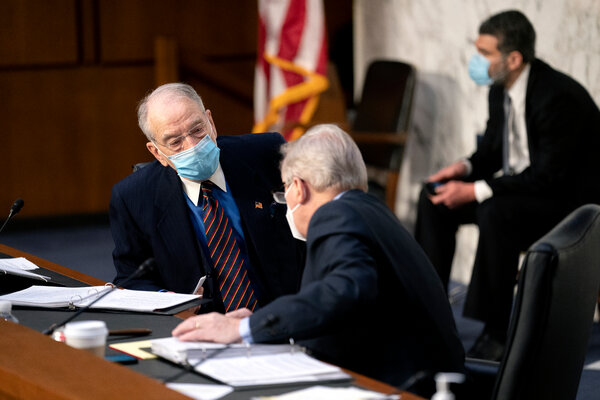 Senator Charles E. Grassley of Iowa, the top Republican on the committee, said he would not “take exception” to answers about the Durham investigation that were “not quite as explicit” as he wanted “because I think you’re an honorable person.”

Judge Garland has sterling legal credentials, a reputation as a moderate and a long history of service at the Justice Department. After clerking for Justice William J. Brennan Jr., he worked as a federal prosecutor for the U.S. attorney’s office in Washington under President George H.W. Bush and was chosen by Jamie Gorelick, the deputy attorney general under President Bill Clinton, to serve as her top deputy.

From Riot to Impeachment

The riot inside the U.S. Capitol on Wednesday, Jan. 6, followed a rally at which President Trump made an inflammatory speech to his supporters, questioning the results of the election. Here’s a look at what happened and the ongoing fallout: