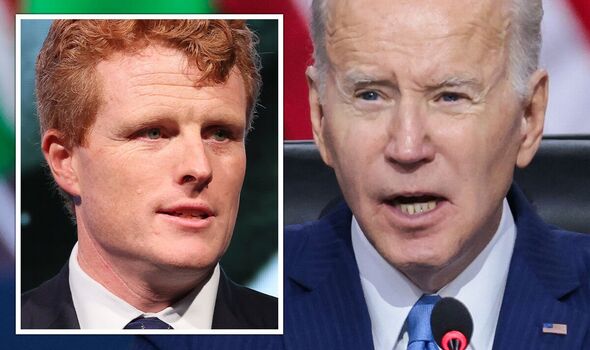 Brexit supporters in Parliament have reacted furiously to plans by Joe Biden to send a member of the Kennedy dynasty to be a special envoy for Northern Ireland and interfere in the talks between Britain and the EU. The move is seen as an attempt to put pressure on the UK to accept Brussels’ demands that the province is in effect under its jurisdiction and broken away from Britain.

Members of the influential European Research Group (ERG) for Brexiteer Conservative MPs have privately warned against the appointment from a US political clan which is perceived as “anti-British.”

Joe Kennedy III is a former Congressman who is the grandson of Bobby Kennedy and great-grandson of the first Joe Kennedy who was ambassador to the UK.

A senior member of the ERG told the Daily Express: “When I saw Joe Kennedy named I thought it as a wind-up to annoy people like me.

“I had to check whether it was April 1 or not.

“The decision would be ludicrous.”

Mr Kennedy has strong links with Sinn Fein and is part of the Irish American lobby which has pushed Democrat policy into a pro-EU position on the thorny issue of the Northern Ireland protocol.

Currently, the UK is attempting to negotiate a deal with the EU to ensure that Northern Ireland remains part of Britain and that food and medicines can continue to be supplied to go on supermarket shelves.

The EU has been taking a hardline position which could see supplies of essential goods cut off from Northern Ireland altogether.

Even within the 27 members, there are concerns over the desire for “Brexit revenge” from EU officials with Hungary’s foreign minister Péter Szijjártó recently agreeing to help the UK after talks with British Foreign Secretary James Cleverly.

However, European Commission president Ursula von der Leyen recently enflamed the situation by likening the IRA to Ukrainian freedom fighters in a speech in the Irish parliament.

There are fears that Mr Biden’s appointment of 42-year-old Mr Kennedy could increase tensions further.

He has been pictured with leading members of Sinn Fein including people suspected of terrorist activities.

A former minister said: “This really is bad news indeed. The entire Kennedy clan held hostility towards the UK and they are so embedded in Irish American politics.

“No Kennedy has ever been helpful to this country starting with the old Joe Kennedy.

“It really is an unwise move on Biden’s part.”

The senior MP added: “Kennedy is probably the last person Biden should be sending to deal with this situation.”

President Biden has made it clear that he wants to defend the Good Friday Peace Agreement but the UK Government has warned that it is the protocol, negotiated as a short-term measure, that puts that at risk.

Talks took place between the UK and EU last week but the British Government has legislation underway to override aspects of the protocol.

Mr Biden and soon-to-be-former Speaker Nancy Pelosi both threatened to veto trade deals with the UK if it did not accept EU demands on the protocol.

As a result, when she was Prime Minister, Liz Truss shelved trade talks with the US to wait and see if a Republican President will be elected in 2024 who is more supportive of a trade deal with Britain.

Past history suggests that Mr Kennedy’s appointment may be problematic.

Mr Kennedy’s father, also Joe, had an unfortunate experience in 1988 when he was in Ulster and clashed with a British army soldier on peacekeeping duty.

He is said to have asked the soldiers why they didn’t go home. They responded by suggesting he went home to America.

But the potential move has been welcomed in many quarters including American legal scholar Laurence Tribe.

He said: “Joe Kennedy is an inspired choice to be President Biden’s envoy to Northern Ireland at this critical time in a troubled history. He’ll be great in that vital role.”