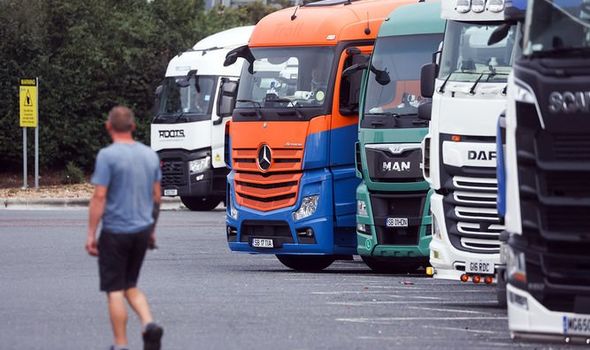 As independent petrol retailers said up to nine in 10 of their filling stations had run dry, motorists were urged to top up their tanks only if needed. And in order to end queues of panic buyers, Business Secretary Kwasi Kwarteng last night relaxed competition laws to let oil firms target fuel stations that run low. He added that “fuel supplies can be maintained and deliveries can still be made”.

Sir Iain led MPs in lashing the Confederation of British Industry (CBI), other industry groups and some commentators for using the crisis to attack the departure from the EU.

He said in an article: “Some broadcasters and journalists have lazily labelled this as a Brexit problem without looking any further, yet this is simply untrue.

“This is a European-wide issue and the culprit is coronavirus. The origins of this chronic shortage lie in the long-term implications of locking down so completely.

“What we now see are the aftershocks of lockdown decision-making beginning to buffet us. There has clearly been little forward-thinking or planning.

“The Confederation of British Industry, which quickly blamed Brexit for the current shortages, instead should recognise that industry leaders themselves must shoulder a significant measure of blame.”

His fellow backbencher Peter Bone said: “I don’t buy the idea that this has got anything to do with Brexit. Certainly, Covid has played a part.

“Obviously we’ve got the flexibility because of Brexit to fix any problems relating to driver shortages. We’ve got complete flexibility now, as an independent sovereign country. We can increase the number of driving tests and equally we can decide who we want into the country and who we don’t want.”

He added: “I don’t see how being in the EU would have improved the situation at all; it would have made matters worse.”

Last night Mr Kwarteng agreed to exempt fuel firms from the Competition Act 1998 temporarily. This will let them share information and prioritise deliveries to locations most in need.

There isn’t a dramatic shortage in drivers, in fact, it has been like this for a long time

He said: “We have long-standing contingency plans in place to work with industry so that fuel supplies can be maintained and deliveries can still be made in the event of a serious disruption.

“While there has always been and continues to be plenty of fuel at refineries and terminals, we are aware that there have been some issues with supply chains. We will enact the Downstream Oil Protocol to ensure industry can share vital information and work together more effectively to ensure disruption is minimised.

“We thank HGV drivers and all forecourt staff for their tireless work.”

The CBI director-general Tony Danker claimed last month that shortages might last for two years. He said: “The Government promised an immigration system that would focus on the skills we need rather than unrestrained access to overseas labour.

“Yet here we have obvious and short-term skilled need but a system that can’t seem to respond.”

He asked drivers to fill up their vehicles when they actually needed fuel rather than topping up tanks frequently, fearing deliveries would be hit by the lack of truckers.

Speaking on Sky News, Mr Shapps said: “Within the country, at the six refineries and 47 storage facilities, there is plenty of fuel.

“We do need to just ensure people are filling up when they need to fill up rather than thinking, ‘I better go and fill up now just in case I need it next week’.”

Mr Shapps said the Government would do “whatever it takes” to ease the crisis. He refused to rule out using troops to deliver fuel.

He said: “The key thing about this is if you look at, for example, the distribution to petrol stations, the shortage of drivers is a much smaller number – 100 to 200 drivers. So we’re not taking about the 5,000 (visas) for that – that’s also for the food sector as well.

“There isn’t a dramatic shortage in drivers, in fact, it has been like this for a long time.”

He said the petrol queues were likely to “resolve” themselves due to the difficulty of stockpiling fuel.

He added: “Fortunately, when it comes to tanks of petrol in people’s cars — unlike, for example, toilet rolls or pasta at the beginning of coronavirus — you can only store a single tank of petrol, you can’t then store it elsewhere very easily.

“So this will resolve itself, but I’m very keen to put in place this massive package of measures to make sure people are reassured.” Mr Shapps admitted that he had not wanted to open the door to foreign workers to tackle vacancies in the transport sector.

He said: “It is unfortunate… we didn’t want — we don’t want — to be relying on overseas labour in the longer run, which is why this is limited until Christmas because we’ve got to sort out these longer-term problems with our HGV sector, which has been around for years, by the way.

“And I’m afraid the thing that has sparked this particular rush on the petrol stations is some fairly irresponsible briefing from one of the road haulage associations, which seems to have got this going.”

Speaking to BBC Radio 4’s The World This Weekend, Petrol Retailers Association chairman Brian Madderson said: “Those measures introduced by the Government this weekend are not ultra-short-term.

“We might see benefits of them later in the autumn as the drivers come across and start to work, but in the very short term this panic buying has caused really serious problems.

“I’ve talked to a lot of our members. They serve the main roads, the rural areas, the urban roads.

“Anywhere in between 50 percent and 90 percent of their forecourts are currently dry, and those that aren’t dry are partly dry and running out soon.

“The oil companies, perhaps rightly, have been giving motorway service areas priority delivery and so people are now flocking on to motorways wherever they have one nearby and buying fuel from the motorways.

“One [motorway site] mentioned to me that they had a 500 percent increase in demand compared to a week ago, which is quite extraordinary.”

Boris fumes at hated EU deal: ‘Crazy to have cancer drugs we can’t move within UK’