Home » Politics » Coronavirus: Jeremy Corbyn accuses government of being ‘well behind the curve’ on COVID-19

Jeremy Corbyn has accused the government of being “complacent” and “well behind the curve” in its handling of the coronavirus crisis.

The Labour leader claimed it was “strange” that ministers were giving advice on COVID-19 which was “different to that given in almost every other European country”.

But the 70-year-old declined to say if he would self-isolate during the outbreak, telling reporters he was following the advice to wash hands frequently and keep a safe distance from people. 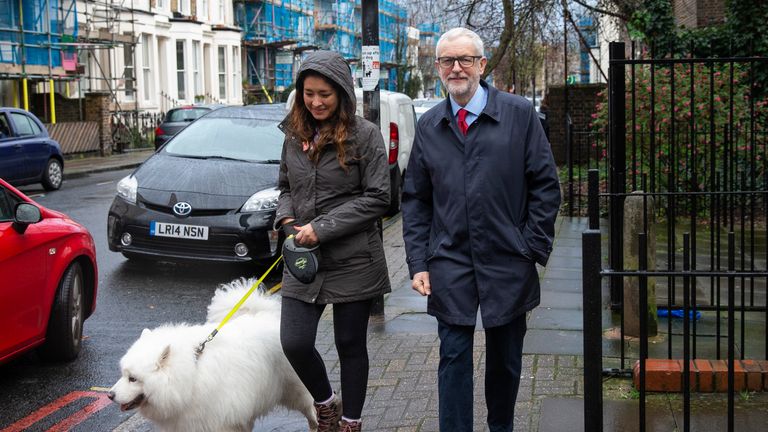 It comes after Health Secretary Matt Hancock told Sky News earlier that over-70s will be asked to self-isolate “in the coming weeks” to try to protect them from coronavirus – and it could potentially last for months.

Speaking in north London on Sunday, Mr Corbyn said: “We are suffering a pandemic. It is very, very serious and the government just seems to be complacent and behind on this.

“They are giving advice which is different to that given in almost every other European country. This is something strange.”

He added: “It seems to me that at every stage, the government just isn’t on it and isn’t fast enough.”

Mr Corbyn said he had written to Prime Minister Boris Johnson “demanding” a meeting to know what is going to be in the emergency legislation to be presented to parliament next week.

Appearing on the Sophy Ridge on Sunday programme, the health secretary said a bill setting out emergency powers to deal with the outbreak will be published on Thursday, and details of what the powers will include will be shared on Tuesday.

On the suggestion that people aged over 70 could be asked to go into self-isolation, Mr Corbyn said: “I think we should ask people to isolate themselves if they have the symptoms in any form and if they are vulnerable.”

Asked if he would self-isolate, he replied: “I am doing what everybody is being asked to do, which is washing my hands frequently and also making sure that the meetings I attend have people who are separated by some distance.

“It is all the kind of practical measures that we all need to take.”

Accountants must give the House some of Trump’s financial data, a judge rules.

For the impeachment trial, Trump settles on a South Carolina lawyer arranged through Lindsey Graham.