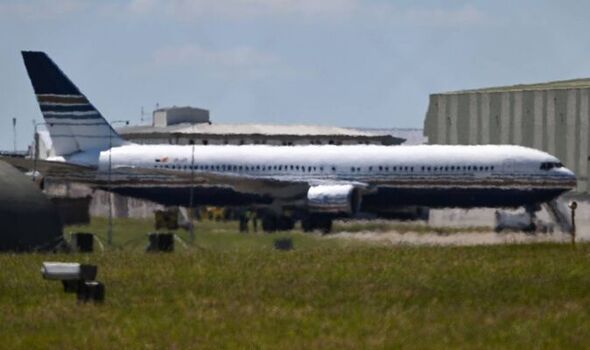 The PM accused lawyers intent on thwarting the Government’s plan of “abetting the work of criminal gangs” smuggling people across the Channel.

Just two hours before the plane was due to take off, the European Court of Human Rights issued an order to stop one man joining the flight, while the Upper Tribunal of the High Court ruled another man should be taken off.

It paved the way for the remaining six to make similar claims against deportation, leaving the flight from Boscombe Down military base in Wiltshire grounded.

The last-minute move sparked anger at the apparent abuse of the legal system to defeat the Government’s policy.

A Whitehall source: “It’s a shame that lefty lawyers are exploiting the system to block the removal of those who have no right to be here.”

On a day of legal appeals at courts in the UK and Strasbourg, France, and demonstrations at detention centres, the flight to Rwanda was first delayed and then ultimately cancelled.

Mr Johnson warned the Government is prepared to pull Britain out of the European Convention on Human Rights if the legal system continues to be used to frustrate government policy.

A Home Office source said it is “appalling that foreign judges have overturned the domestic courts to stop this”.

Two asylum seekers due to be on the flight to Rwanda last night had their deportation from the UK postponed following last-ditch legal appeals.

The European Court of Human Rights granted the blocking of the removal of one Iraqi detainee who was due to be deported.

The court indicated to the Government that the applicant should not be removed to Rwanda until three weeks after the delivery of the final domestic decision in his ongoing judicial review proceedings.

Another Iraqi detainee was also not on the plane following an injunction from the Upper Tribunal of the High Court preventing his departure.

In a statement hours before the flight’s planned departure, the ECHR said it had granted an “urgent interim measure” in the case of an Iraqi man, known only as “KN”.

The man, who is in his fifties, left Iraq earlier this year and crossed the English Channel to reach the UK, rather than claiming asylum in another European country.

The final asylum seeker had his ticket cancelled at 10.10pm – 40 minutes after the flight had originally been scheduled to depart.

It was thought that seven of those facing deportation had been stopped from the flight by the ECHR, with one by the Upper Tribunal.

Mr Johnson said he had always been braced for “bumps in the road” when he announced the ­radical plan to tackle the small boats crisis.

He said: “It may take a while to get working properly, that doesn’t mean we aren’t going to keep going.

“I think it is very important we continue to show the people traffickers their business case is going to be undermined and they are cheating people.”

But he said all options are under review to ensure he can enact the policy, including withdrawing the UK from the human rights convention.

The PM added: “The legal world is very good at picking up ways of trying to stop the Government from upholding what we think is a sensible law.

“Will it be necessary to change some rules to help us as we go along? It very well may be. All these options are under constant review.”

By yesterday morning, just seven individuals were still scheduled to fly out to Kigali out of the 130 or so initially expected to join the flight.

The UK struck a partnership earlier this year with the Rwandan government to take thousands of migrants who illegally enter the UK.

Home Secretary Priti Patel had signed off the deal with Rwandan officials. Security guards at the Hope Hostel in the capital Kigali said they were ready to process the new arrivals today.

But opposition to the plan, which was drawn up to smash the business model of the people smugglers who take thousands of pounds off migrants to send them over the Channel in unsafe small boats, intensified yesterday.

Protesters blockaded Colnbrook Immigration Removal Centres at Heathrow to demonstrate against the planned flight. The Archbishops of Canterbury and York, along with senior bishops, signed a joint letter condemning the plan.

Archbishop of Canterbury Justin Welby said: “Deporting asylum seekers should shame us as a nation.”

Human rights lawyers cranked up their attempts to block the deportations.

Challenges by four of the asylum seekers were rejected at the High Court yesterday. But the ECHR later issued an order to prevent the deportation of one of the individuals scheduled to be on the flight.

Mr Johnson remained steadfast in his determination to see the plan in action, accusing lawyers of playing into the hands of the people smugglers.

At a Cabinet meeting, he said: “They are, I’m afraid, undermining everything that we’re trying to do to support safe and legal routes for people to come to the UK and to oppose the illegal and dangerous routes.”

The PM said the Government was working with “humanity and compassion” to tackle illegal immigration. Mr Johnson said he wanted to stop the gangs “who are getting away with, in some cases I think, manslaughter, if not murder”.

He said it was “not reasonable” to try to turn boats around at sea in the English Channel because the waters are “very dangerous”. He added: “We have to work within the scope of common humanity and compassion, that’s the right thing to do.”

The PM said there were many around the Cabinet table “whose immediate ancestors came to this country to seek a new life here”, often “in fear of their lives and fleeing persecution”.

The Bar Council and Law Society of England and Wales issued a statement calling on the Prime Minister to “stop attacks on legal professionals who are simply doing their jobs”.

The flight, a Boeing 767 operated by the Spanish charter firm Privilege Style, is believed to have cost £500,000, even though it did not leave the runway.

It was said the current solution is already costing the UK taxpayer £1.5billion every year, with almost £5million a day spent accommodating asylum seekers in hotels.

Conservative MP Tom Hunt slammed the “hysterical” criticism levelled at the policy by bishops and other members of the “elite”.

He said: “Many of the most vocal critics have been from elite society and have never had to live with the consequences of uncontrolled illegal immigration – for example, some of those bishops who have intervened into the debate.”

Matthew Hooton: Labour and Greens deal is a masterstroke by Jacinda Ardern