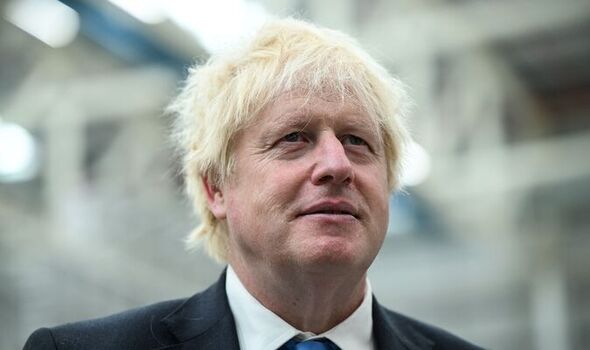 Mounting concern in Tory ranks that the Prime Minister is in “very serious trouble” threatens to overshadow the final weeks of the Conservative leadership contest. Candidate Rishi Sunak on Sunday attempted to boost his chances of succeeding Mr Johnson by unveiling plans to secure energy independence for Britain by 2045, while rival Liz Truss described how she would work to stop the United Kingdom splitting apart.

But allies of the present Prime Minister are concerned he will be found in “contempt” of Parliament by the privileges committee investigation led by former deputy leader Harriet Harman and may have to fight a by-election.

Tories claim that Labour is trying to kill off the chances of a comeback by Mr Johnson and there is anger that Conservative whips did not do more to protect the PM.

The whips are blamed for running a “very sloppy operation” and making a “howling error” by not ensuring the mandate of the privileges committee was limited to identifying whether Mr Johnson “knowingly” misled Parliament. If he is found guilty of contempt there is the danger he could be suspended from the Commons and have to defend his Uxbridge and South Ruislip seat in a by-election.

Former Leader of the Commons Jacob Rees-Mogg, who is today Brexit Opportunities minister, fired the latest shot at the investigation.

He told GB News: “I think the committee inquiry is absurd. The Prime Minister has gone.”

Mr Rees-Mogg said Ms Harman was “doing genuine damage to her reputation” by chairing the investigation.

A Johnson ally said: “They should drop it immediately. It is awful and vindictive that they are trying to kick a man when he’s down.

“It is clear though that they worry that Boris might make a comeback and are running scared. This vengeful witch hunt is unbecoming of Parliament and a disgrace.

“Ultimately, Boris should answer to the electorate not a kangaroo court.”

A senior Conservative backbencher added: “Boris has already paid the price for all of this. [We] shouldn’t fall for this and should rescind the Committee’s mandate when the House returns.”

However, other Tories are defending the committee – which has a Conservative majority – and insist the investigation should not be stopped.

A long-serving minister said: “No one is above the rules. The privileges committee must go ahead.

“The Conservative colleagues on the committee are decent and honourable and should not be attacked… It is for Parliament to decide these matters.

“I, and hundreds of other colleagues, feel very strongly on this.”

Meanwhile, former Chancellor Rishi Sunak sought to capture the attention of the Tory tribe by pledging to legislate so the UK will be “entirely energy independent by 2045”. He confirmed that if he becomes PM on September 5 there will be immediate support for households with their energy bills.

Mr Sunak promised urgent action to drive up domestic energy supply with the creation of a new energy security task force and deregulation in the North Sea to allow gas production to increase over the winter.

Fracking for shale gas would be allowed where there is local consent, and he wants to introduce low cost measures to insulate millions of homes.

He said: “We are facing an energy crisis and I have a plan to both get us through it and make sure this is a one winter crunch.”

His rival for the top job, Foreign Secretary Ms Truss, presented herself as a PM-in-waiting who would govern in the interests of all the nations of the United Kingdom.

She accused Scotland’s SNP of being preoccupied with the issue of independence when they should be focused on averting a recession and attacked the Labour Government in Wales for failing to invest infrastructure.

Ms Truss said she would invest in projects including upgrading the A75 between Gretna and Stranraer and building the M4 relief road in Wales. She said she would work to open up new export markets for products such as Scottish whisky and smoked salmon, Welsh lamb and ships from Northern Ireland.

She said: “For too long, people in parts of our United Kingdom have been let down by their devolved administrations playing political games instead of focusing on their priorities. If elected prime minister, I will deliver for our whole country.

“We are not four separate nations in an agreement of convenience, as some would have us believe. We are one great country which shares a history and institutions, but also family and friends, memories and values.

“I would ensure that our entire family continues to get the attention, support, and investment that it deserves.”