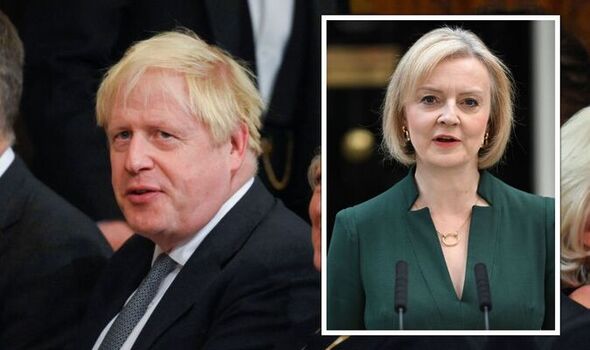 The former Prime Minister compared his successor’s financial plan to the comedy duo’s famous sketch about playing the piano badly.

Mr Johnson attempted to swerve questions by American broadcaster CNN about the disastrous tax plans, saying it was rude to criticise a British government abroad.

But he went on to say: “It’s kind of like when I play the piano. The notes individually sound perfectly OK, but they’re not in the right order, or occurring at the right time.”

The comedian hit back: “I’m playing all the right notes, but not necessarily in the right order.”

The former prime minister dismissed claims Brexit is to blame for the UK’s economic woes as “complete and utter nonsense” and “confirmation bias”.

Mr Johnson also dismissed the chances of him returning to No 10 as “impossibilia cubed or squared”.

“I then did become PM so my chances of becoming PM again I think are those impossibilia cubed or squared.”

Reflecting on his biggest mistake, he told the broadcaster he should have listened more to MPs during the Covid pandemic.

He said: “Covid was a bummer. Covid was really very difficult. I think the thing that I should have done more of is I should have spent more time talking to my troops rather than just trying to get on and manage the pandemic, and that’s an honest answer.

“It was very, very difficult trying to run the country while we were going through this thing and we had a huge number of MPs who’d never been elected before, who didn’t think they’d be elected and who hardly knew me at all. And I’ve got to put my hands up, I didn’t spend enough time with them. That was my fault.”

Berlin dismissed Mr Johnson’s claim in the interview that Germany wanted Ukraine to quickly “fold” following Russia’s invasion has been dismissed as “utter nonsense” by Berlin.

The former premier said Germany wanted Ukraine to quickly lose, rather than have a lengthy war, for “all sorts of sound economic reasons”.

“We know that the very entertaining former Prime Minister always has a unique relationship with the truth; this case is no exception,” he said, according to German media.

Switching to English, Mr Hebestreit added: “This is utter nonsense.”

Germany’s ambassador to the UK tweeted the official’s rejection of Mr Johnson’s claim, which will not have helped UK-German relations.

Mr Johnson earlier told US broadcaster CNN: “The Germans, for all sorts of sound economic reasons, really didn’t want it to… I’ll tell you a terrible thing – the German view was at one stage that if it were going to happen, which would be a disaster, then it would be better for the whole thing to be over quickly and for Ukraine to fold.

“I couldn’t support that. I thought that was a disastrous way of looking at it, but I could understand why they thought and felt as they did.”

The ex-PM also said France was in denial “right up until the last moment” when Russian forces crossed the border.

“This thing was a huge shock. We could see the Russian battalion tactical groups amassing but different countries had very different perspectives,” he said.

“Be in no doubt that the French were in denial right up until the last moment.”

No reason given for Trump cutting short his Florida vacation