MATAMOROS, Mexico — Jonathan Gutierrez and his partner, Blanca Lara, thought they would be enjoying a rare moment of hope at this misery-shrouded encampment on the U.S.-Mexican border now that Joseph R. Biden Jr. was president. Instead, the couple and their newborn baby were huddled last week against the cold and rain in abject confusion.

For Mr. Gutierrez, 23, a Nicaraguan who was consigned to wait in Mexico 16 months ago by the policies of Donald J. Trump, Mr. Biden’s decision to resume processing asylum seekers this week means he could soon be awaiting his day in immigration court inside the United States.

But for Ms. Lara, 19, who was expelled quickly last month under a separate Trump-era pandemic emergency declaration, the other side of the border seems no closer. The new administration has made no move to lift the Covid-era emergency rule.

“The hardest thing would be for them to tell us that she couldn’t get in after all this that we’ve gone through,” Mr. Gutierrez said through the steel fence that now surrounds this migrant camp. 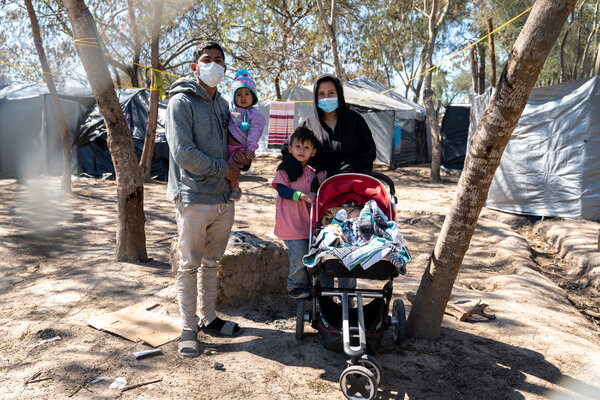 Mr. Biden campaigned on taking a more humane approach at the border and is beginning by tackling the logistical maze of processing more than 25,000 migrants forced to wait in Mexico under the program known as the Migrant Protection Protocols or, M.P.P., one of the most consequential border policies of the Trump era. Before Mr. Trump implemented the policy in early 2019, families seeking asylum were typically detained for a short period before they were released inside the United States to await adjudication of their cases. For more than a year, immigration activists say, the families have been subjected to sexual assault, kidnappings and limited access to legal representation in Mexico.

Those looking to enter the United States under Mr. Biden’s new initiative to process the asylum seekers forced to wait in Mexico are required to first register online and test negative for the coronavirus. Administration officials have emphasized that a limited number of migrants would be processed initially and those who have waited the longest would be prioritized.

At the same time, Mr. Biden is keeping a pandemic rule in place that has empowered agents to rapidly turn around migrants like Ms. Lara, who is from Honduras. His administration has said a cautious approach is needed to navigate the interlocking restrictions left by Mr. Trump and to avoid encouraging additional migration of Central American families who could overcrowd facilities in communities struggling with the coronavirus.

Complicating matters further, in recent weeks a trickle of migrants who say they are fleeing persecution and poverty have successfully crossed the border and been released into the United States. Their presence at bus stations with tickets to points north is only adding to the distress of those who have waited in Mexico for more than a year.

Matt Leas, a spokesman for the Homeland Security Department, said the Biden administration was working to rebuild an “immigration system decimated over the last four years.”

“It’s going to take time,” Mr. Leas said. “In the meantime, the border is not open, and people should not make the journey to reach it.”

For those working with the migrants, the mood is one of exasperation.

“It was completely opaque during the Trump administration, and the Biden administration is trying but it’s got to be way the hell more,” said Charlene D’Cruz, a lawyer who has assisted asylum seekers in Matamoros. “The confusion could be stemmed.”

Some asylum seekers who have long awaited the chance to be processed are finally landing on U.S. soil. On Friday, 25 asylum seekers were let through the port of entry in San Ysidro, Calif., while on the Mexican side of the border station, the crowd only grew as the day progressed. Jose, a Nicaraguan who said he fled political persecution, was among another 25 asylum seekers processed at San Ysidro on Monday, the second group allowed to enter the country since the Biden administration began dismantling “remain in Mexico.”

After being turned back at the border on March 2 last year, he was robbed and beaten several times by Mexican police officer who tried to extort money from him, according to his attorney at Immigrant Defenders Law Center, Paulina Reyes.

“Thank God, I am here already,” said Jose, 32. “I feel safe at last.” He asked to be identified by only his first name for safety reasons.

Asylum processing for those placed into the “remain in Mexico” program was scheduled to begin in South Texas this week, two Homeland Security Department officials said, though the agency said in a statement issued on Monday that “D.H.S. cannot yet specify the date processing will begin.”

In anticipation, about a dozen migrants walked across the Gateway International Bridge connecting Matamoros to Brownsville, Texas, on Friday, only to be turned away by border officers. Then Josely Murillo, 27, her husband, and their four children walked to the Mexican immigration office to ask to be put onto “a list” to enter the United States. They were again turned away.

“They’ve already been without school for three years,” Ms. Murillo said through tears as she looked at her children.

Even for those migrants with a clearer path north, Biden administration policies have been difficult to navigate. When the online registration opened for those trapped by “remain in Mexico,” a team of American lawyers set up three laptops in a tent here to assist migrants who lined up across a muddy plateau. Some applicants tried to register dozens of times; then the website crashed, according to one of the lawyers, Ms. D’Cruz.

Adding to their confusion, Ms. D’Cruz said, is the disparate treatment being meted out to migrants who manage to get across.

Even though Mr. Biden has kept in place the pandemic emergency rule that has allowed officers to rapidly turn away more than 400,000 migrants at the border since it was implemented last March, about 50 migrants have been dropped off a day by Customs and Border Protection at a bus station in Brownsville, headed to points north.

Troy Miller, the acting commissioner for Customs and Border Protection, said in an interview that the agency has been releasing migrants in part because of a change in Mexican law that prohibits the detention of small children. As a result, border agents have not been able to expel some Central American families who reach South Texas.

“Obviously that exhibited change affects immigration for us,” Mr. Miller said, adding that border agents are apprehending about 800 migrants crossing into the Rio Grande Valley a day, adding pressure to detention centers and shelters for migrant children that have restricted space because of the pandemic. The Biden administration is also preparing for a potential increase in migrant children at the border, reopening an emergency overflow center in Carrizo Springs that can hold 700 children.

Under Mr. Trump, Homeland Security Department officials had sternly warned that such releases would be inevitable if Mr. Biden was elected. Officials from both administrations have said keeping the pandemic rule in place is necessary to prevent the spread of the coronavirus in detention centers and in border communities. Border agents encountered a migrant at the border about 78,000 times in January, the highest number for that month in at least a decade. And most of those apprehended were rapidly expelled south.

But the disaster predicted by Trump administration officials has not yet happened.

Juan Mendez III, the mayor of Brownsville who is known as Trey, said his community can help support migrants continue their journey to relatives in the United States as they pursue their cases. The number of migrants so far released into the town pales in comparison to 2019, when hundreds of families were dropped off at the local bus station a day.

“If it’s several hundred over night than that’s something that would become overwhelming for us,” said Mr. Mendez, adding that the coronavirus positivity rate among the released migrants hovers around 10 percent to 15 percent, compared to 25 percent for the Brownsville community at large. “The administration is very well aware of that, we’ve conveyed that on numerous occasions.”

On Saturday, border agents dropped off a dozen migrants, all mothers and small children, outside of the Brownsville bus station. Within minutes, a team of city officials and volunteers had begun setting up a station to test for the coronavirus. With a negative, they were allowed into the station to continue their journey. If they tested positive, the volunteers used donations to pay for their quarantine at a local hotel — although it was not mandatory. Within three hours, the number of migrants at the station grew to about 50.

Doris, a mother of two boys who fled an abusive former partner in Guatemala and crossed the border in recent weeks, did not expect to be provided testing, blankets or coloring books for her children when she was dropped off on Saturday.

“They’re very good people,” she said of the city staff and volunteers.

A similar effort is underway in Matamoros. On the north end of the encampment, which holds about 1,000 migrants, authorities are putting the final touches on a large tent where migrant families will receive a test for the coronavirus before they cross into the United States. Volunteers for the Red Cross walked around a camp that was for months neglected by both the Mexican and American governments.

One Honduran, Walter Lara, who had lived in the camp since November 2019, was so excited at the prospect of entering the United States that he asked another asylum seeker to give him a haircut for the occasion. He was willing to be patient.

“We believe in the process that will happen,” Mr. Lara said.

Elsewhere confusion reigned. Those stranded by “remain in Mexico” struggled to register through the administration’s online system and were frustrated that new arrivals are being released across the border, Ms. D’Cruz said.

When the Biden administration’s website crashed, Ms. D’Cruz printed out the forms to train migrants how to register. The State Department activated a hotline on Monday for migrants having trouble accessing the website.

Isabel Hernandez Aguilar, 39, has also struggled to find enough money to pay for data on her phone to register. A Salvadoran, she plans to apply for asylum with her teenage son, hoping to escape the violence that has plagued the camp and the recent freezing temperatures. They sleep while holding each other’s hands, she said, to ensure neither are taken in the night.

“We slept like that in fear,” Ms. Aguilar said through the steel fence erected around the camp. “The cold wouldn’t let you sleep, the fear, the footsteps around you, the people crying around you.”