At his news conference on Thursday, the president provided a revealing look into how he viewed the threat from Beijing. 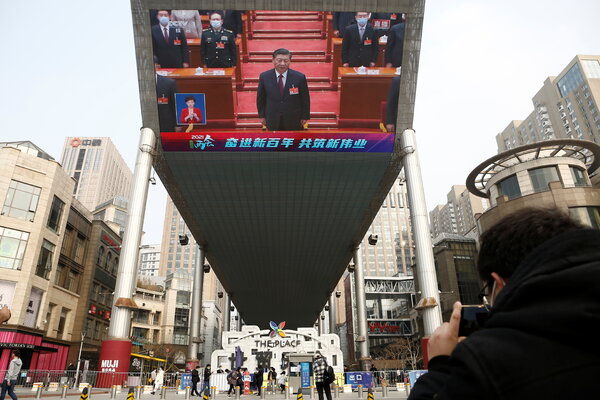 WASHINGTON — At the end of a winding answer on Thursday about competing with China and about his relationship with Xi Jinping, a man he said does not have a democratic “bone in his body,” President Biden offered up a revealing assessment of one of America’s most pressing challenges.

“This is a battle between the utility of democracies in the 21st century and autocracies,” he told reporters at his first news conference as president. “We’ve got to prove democracy works.”

China’s president, Mr. Xi, Mr. Biden said bluntly, was “a smart, smart guy” who shared with President Vladimir V. Putin of Russia a belief that “autocracy is the wave of the future and democracy can’t function” in the complexities of the modern world.

Among the biggest tasks of his presidency, Mr. Biden seemed to be arguing, is to prove anew to a skeptical world that both American democracy and its model of democratic capitalism still works — and that it is superior to the very different system Mr. Xi is ruthlessly enforcing at home as he tries to extend China’s influence around the world.

For a president barely 10 weeks into office, casting the United States as confronting a global struggle with the Chinese model has some clear political benefits. One of the few issues that unites Democrats and Republicans is the need to compete head-on with Beijing. Senator Dan Sullivan, Republican of Alaska, said on Monday that the Chinese have already taken notice.

“They recognize in many ways that we are now finally awakened to the challenge,” he said this week at the Atlantic Council. “And I would call it a bipartisan awakening.”

Mr. Biden’s aides say his view of the Chinese challenge is not solely one of foreign policy. He plans to make full use of the fear of Beijing’s ambitions as he introduces his infrastructure initiative next week.