The SNP has accused the Westminster Government under Liz Truss of failing to acknowledge the Scottish First Minister Nicola Sturgeon. It is customary for a new Prime Minister to hold talks with the leaders of the devolved governments for Scotland, Wales and Northern Ireland Amid a storm of SNP allegations that Ms Truss has neglected to contact the First Minister, a Scottish Cabinet Minister has now admitted the two leaders have spoken in person. Angus Robertson, Cabinet Secretary for the Constitution, External Affairs and Culture, said the Prime Minister and Nicola Sturgeon spoke as the pair both attended the state funeral service for Queen Elizabeth II. 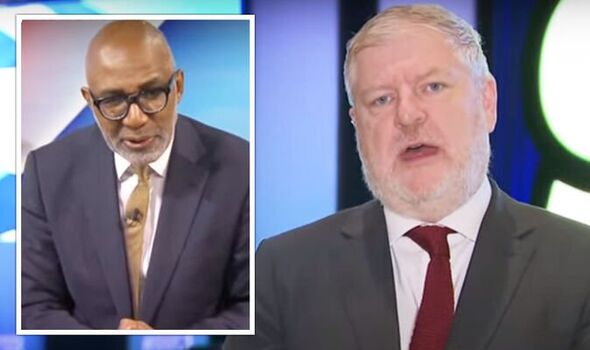 Speaking on Sky News, Mr Robertson reported: “I think the First Minister did speak in passing to Liz Truss at the funeral for Her Majesty The Queen.

“It is common custom and practice when somebody takes up office, this is what happened with Boris Johnson and his predecessors, that they get in contact with the First Ministers of Scotland and Wales within days of assuming office.

“That’s what happened then. That’s not what is happening now and it’s disappointing and frankly a bit childish.”

He suggested there had not been a formal meeting between the two leaders, although Liz Truss and Nicola Sturgeon had shared a brief exchange at the state funeral.

Host Trevor Phillips questioned the MSP as his statements that the pair had spoken, yet also that the Prime Minister refused to speak to Ms Sturgeon, evidently conflicted one another.

Mr Robertson clarified: “I’ve just told you that she did speak to her.

“We are supposed to have grown-up relations which is exactly why the First Minister did speak to the new Prime Minister at the Queen’s funeral.”

“Unfortunately, the Prime Minister has not found time to speak to the First Ministers of Scotland or Wales since assuming office.”

Remoaners as hysterical as ever! Brexiteer erupts over Regent Street Union flag row