The distribution of vaccines in the United States has gotten off to a slower-than-expected start, federal health officials acknowledged in a news conference on Wednesday, though they also voiced confidence that the pace would accelerate in the coming weeks.

As of Wednesday, more than 14 million doses of the Pfizer and Moderna vaccines had been sent out across the United States, up from 11.4 million doses on Monday morning. But just 2.1 million people had received their first dose as of Monday morning, according to a dashboard maintained by the Centers for Disease Control and Prevention.

“We agree that that number is lower than what we hoped for,” said Moncef Slaoui, scientific adviser of Operation Warp Speed, the federal effort to accelerate vaccine development and distribution. He added, “We know that it should be better, and we’re working hard to make it better.”

The 2.1 million administered doses reported by the C.D.C. is an underestimate of the true number because of lags in reporting. And a C.D.C. official said in a separate news conference on Wednesday that 2.6 million people had received their first dose. Whatever the number, it falls far short of the goal that federal officials put forward as recently as this month to have 20 million people vaccinated by the end of this year.

The Operation Warp Speed news conference came a day after President-elect Joseph R. Biden Jr. gave a speech in Wilmington, Del., criticizing the Trump administration for these delays. Mr. Biden said that, at the current rate of vaccination, “it’s going to take years, not months,” to protect the entire country.

When he takes office on Jan. 20, Mr. Biden said, he will use a law called the Defense Production Act to “order private industry to accelerate the making of the materials needed for the vaccines as well as protective gear.” The Trump administration has already used that law to speed manufacturing, however, and Mr. Biden has given few details about how his plan will be any different. He has promised to administer 100 million shots — or enough for about 50 million people if using the two-dose vaccines — in the first 100 days of his term.

“This is going to be the greatest operational challenge we’ve ever faced as a nation,” Mr. Biden said, “but we’re going to get it done.” 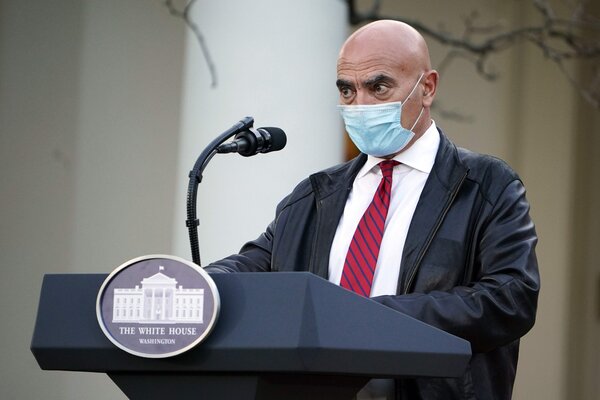 In a tweet on Tuesday, President Trump seemed to lay the blame on governors, saying that it was “up to the States to distribute the vaccines once brought to the designated areas by the Federal Government.” But several governors have recently said their states have struggled because they had not received enough money from the federal government.

At the Operation Warp Speed news conference on Wednesday, Gen. Gustave F. Perna, the effort’s logistics lead, said his team did not have a clear understanding of why these delays were happening. He said the C.D.C. was gathering data to better understand the factors driving the slow uptake. “To have greater specificity at this time, after two weeks, I don’t think would be appropriate,” he said.

But General Perna pointed to a few possible contributing factors. In addition to the lags in reporting, the holiday season and winter weather have delayed uptake. Hospitals and other facilities administering the vaccines are still learning how to store the doses at very cold temperatures and properly administer them. And states have set aside many doses to be given out to their long-term care facilities, a drive that is just gearing up and expected to take several months.

So far, most vaccines administered have been given out at hospitals, clinics and nursing homes. Dr. Slaoui and General Perna both said they expected the pace of the rollout to accelerate significantly once pharmacies begin offering vaccines in their stores.

The federal government has reached agreements with a number of pharmacy chains — including Costco, Walmart and CVS — to administer vaccines in their stores and other locations once vaccines become more widely available. So far, 40,000 pharmacy locations have enrolled in that program, General Perna said.

“What we should be looking at is the rate of acceleration over the coming weeks,” Dr. Slaoui said, “and I hope it will be in the right direction.”

EU reopens its borders to 14 nations but not to U.S. tourists due to coronavirus – The Denver Post