Home » ‘There Was Nothing Anybody Could Do for These Patients.’ Now There Is.

“I can’t do this anymore,” Sonia Sein told herself, her family and her doctor.

For six years, she had endured a tube inserted in her windpipe, or trachea, to keep her alive, but her discomfort and distress were becoming more and more unbearable.

Largely confined to her Bronx apartment, she needed home health aides and had to quit her career as a social worker for pregnant women. If she talked for over five minutes, she had to stop “because I couldn’t breathe.”

The tube was necessary because her trachea — the airway leading to the lungs — had become damaged after she spent weeks on a ventilator for a severe asthma attack in 2014. She had subsequently undergone six major surgeries and more than 10 smaller procedures, but with all conventional approaches to address her condition exhausted, she made plans to have the tube removed and receive only palliative care. “I don’t want to live like this,” she concluded.

Today, Ms. Sein, 56, dances and plays tag with her grandchildren and plans to resume working, possibly as an acupuncturist. She says she feels she has been given a “chance of being alive one more time.”

Her transformation follows a groundbreaking experimental procedure she underwent in January: the first time, medical experts believe, a donor trachea has been successfully directly transplanted into another person.

The 18-hour procedure, conceived and led by Dr. Eric M. Genden Sr., chairman of otolaryngology-head and neck surgery at Mount Sinai Health System in New York, is a milestone because — unlike kidneys, hearts and lungs — the trachea has defied decades of transplantation attempts.

“It’s very exciting,” said Dr. G. Alexander Patterson, a professor of surgery at Washington University in St. Louis, who was not involved in the case.

Thousands of people in the United States alone develop trachea problems each year from burns, birth defects, tumors and extended intubation on ventilators. The coronavirus pandemic will most likely create more cases because many Covid-19 patients have needed weeks on ventilators.

Hundreds of Americans are estimated to die each year because techniques like stents, surgery or lasers cannot heal their damaged tracheas, and they suffocate when airways narrow dangerously or collapse.

“There was nothing anybody could do for these patients,” said Dr. Genden, who became captivated by the problem in medical school 30 years ago after a patient with a tracheal tumor died. Guided by several mentors, he delved into research and animal experiments, developing a transplant approach.

Because immunosuppressant drugs are required to prevent rejection of the transplant, cancer patients would be eligible only if free of cancer for five years, Dr. Genden said. For other cases, though, doctors say the approach seems promising.

“It’s very significant,” said Dr. Pierre Delaere, a professor of head and neck surgery at University Hospital Gasthuisberg in Belgium, a trachea specialist not involved in the case. Still, noting that previous attempts didn’t show documented success, he cautioned that longer-term results were needed before the technique should be embraced, adding, “Let’s see how it works and how you can do it in more patients.”

The apparent success of Ms. Sein’s operation is also notable because the trachea field has been rocked for years by a sensational scandal. 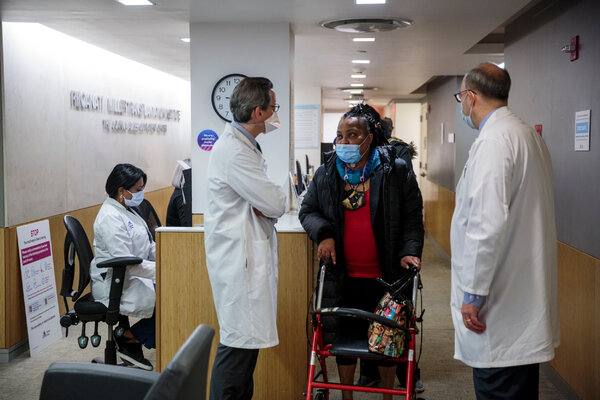 That drama began about a decade ago when Dr. Paolo Macchiarini, working at Sweden’s famed Karolinska Institute, garnered headlines and accolades for replacing damaged tracheas with plastic tubes seeded with patients’ stem cells that he cultivated in devices called bioreactors. The transplants, performed on patients from the United States and other countries, were heralded as inaugurating a regenerative medicine revolution.

But of 20 patients, including children, most ultimately died, and scientists said Dr. Macchiarini misrepresented data and exaggerated his technique’s effectiveness.

A Swedish filmmaker’s investigative documentary raised further questions, as did a Vanity Fair article detailing how the beguiling surgeon became romantically involved with an NBC producer working on a feature about him and apparently conned her into believing he was divorced and would marry her in a ceremony officiated by the pope and attended by the Clintons, Obamas, John Legend and Elton John.

The Karolinska Institute, alleging scientific misconduct, dismissed Dr. Macchiarini, who has long denied wrongdoing. Journals retracted several of his studies. In 2019, an Italian court said he had forged documents and abused his position, charges unrelated to his trachea work. In September, a Swedish prosecutor indicted him on aggravated assault charges related to three trachea transplants. The case is pending.

“Here’s this handsome Italian surgeon at the finest institution in the world, the Karolinska, and he’s everything I’m not: He’s got a beautiful head of hair, he drives a motorcycle, he’s got an accent, he’s incredibly charismatic and dynamic,” Dr. Genden said. “He says, ‘I’ve created this bioreactor and it’s stem cells and it makes tracheas.’ And it’s huge.”

Dr. Genden said that when he and colleagues questioned Dr. Macchiarini at a conference early on, “in his bigger-than-life way he says, ‘This is ridiculous, you don’t know what you’re talking about, it functions beautifully.’”

Dr. Genden thought his work had “become obsolete, so you basically shut down the lab,” he said. “You can’t justify doing experimental surgery and immunosuppression when you see something else that looks perfect, so you realize, wow, we’re out of business.”

As Dr. Macchiarini’s work drew criticism, Dr. Genden revived his idea, but was uncertain about trying it. The scandal meant “there’s an amazing amount of scrutiny,” he said. “We’re going to show up and say, ‘As a student, I had this idea on the back of a napkin and now we’re ready to go’ — and if it fails, the patient dies and it becomes yet another example of some surgeon who thought he could solve a problem and he’s created, instead, just the opposite.”

There was another reason to be daunted too: historical assumptions that tracheas weren’t transplantable.

“The trachea has been characterized as a simple tube, but it’s very complex,” Dr. Delaere said. About 11 centimeters (4⅓ inches) long, one side curves like a halfpipe, composed of cartilage rings and ligaments. The other side is flat and mobile to move air to the lungs. 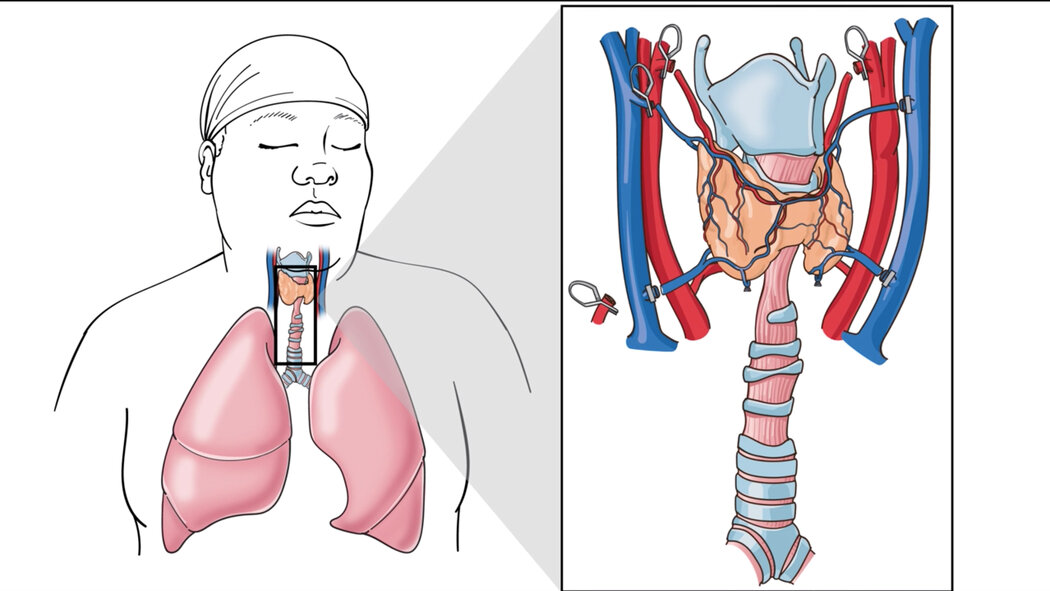 Any replacement trachea must be rigid or “it’ll collapse like a straw in a McDonald’s milkshake,” Dr. Genden said. It must be lined with cilia, hairlike projections “like shag carpeting” that move and clean the air we breathe in, he said. And it needs a blood supply to connect to the patient’s vascular system.

Other trachea replacement attempts include transplanting part of a donor’s frozen, preserved aorta, the body’s main artery, and fabricating tracheas from patients’ own chest muscles and rib cartilage.

“Some of them have been successful, but they’re cumbersome in different ways and they’re not a trachea,” Dr. Patterson said. “It’s kind of a marginal substitute, and many patients need further interventions to maintain their airways.”

Dr. Delaere developed another innovative method, performed on nine patients so far: implanting a section of donor trachea in a patient’s forearm for weeks until it develops blood vessels and can replace part of the patient’s trachea. An advantage is that immunosuppressants are necessary only for several months, he said.

But, he added, “It’s an indirect technique.” It takes time and can replace only the trachea’s halfpipe side, “so it’s not a complete tube.”

Dr. Genden said some scientists told him “‘You’re out of your mind’” because trying a transplant would risk his reputation. But when Dr. Sander S. Florman, director of Mount Sinai’s Transplantation Institute, and LiveOnNY, a nonprofit organ donation organization, agreed to collaborate, his wife, Audrey, encouraged him.

“My wife was the one who said, ‘If you truly believe that people are dying from this and that you could maybe make a difference, you can’t just fold up and go home,’” he said.

The “secret sauce” in his approach, he said, is transplanting not just the donor trachea but also its attached esophagus (food tube), thyroid gland and thyroid arteries. That meant the donor trachea was accompanied by a blood supply that Dr. Genden connected to Ms. Sein’s blood vessels.

Guided by a high-powered microscope, he used surgical thread half the diameter of a human hair. He opened and cleaned out the donor’s esophagus, laying it against Ms. Sein’s esophagus.

“That was a very smart idea to help maintain the fragile blood supply of the airway by leaving the esophagus in place behind it,” Dr. Patterson said.

The donor was a young man (identifying details are being withheld to protect privacy). The different gender was important, allowing Dr. Genden to use chromosomal analysis to detect whether Ms. Sein’s cells populated the new trachea. As of late March, 6.5 percent of cells in the donor trachea were hers, with the proportion increasing, he said.

He hopes the immunosuppressant drugs, which can create health risks, can be reduced or even stopped “if the entire graft becomes filled with Sonia’s cells.”

For Ms. Sein, the procedure was a long-sought dream. In 2017, after another hospital said everything possible had been tried, she felt desperate.

Dr. Genden said Ms. Sein beseeched him for the transplant, saying, “‘You need to do this for me or I’m going to end my life.’”

After realizing other treatment methods wouldn’t help, he concluded that Ms. Sein had a “logical, thoughtful” grasp of transplantation’s risks and of her health condition. He understood how difficult her life had become.

At night, when she connected her tracheal tube to a ventilator, “the alarm kept going off to let people know that I stopped breathing,” said Ms. Sein, who hated causing her family concern.

Because mucus would clog her tube, “she was constantly suctioning, constantly worried about her airway, and it becomes overwhelming,” Dr. Genden said, like being held down in a swimming pool. “You start to panic because you can’t breathe.”

By early 2020, ethical approvals were in place, but the coronavirus pandemic held things up. By this year, Dr. Genden said, her condition had deteriorated so that “if we delay further, it’s not going to work out.”

On Jan. 12, Dr. Genden got a call: An appropriate donor had died. The next morning, with the donor and Ms. Sein in adjacent rooms, a team of over 50 medical personnel assembled.

“I had a brave face, but I was scared,” Ms. Sein said. She considered backing out.

“You got this?” she asked Dr. Genden.

After extracting the donor’s organs, “you go next door and you open up Sonia and you remove the diseased trachea, and there is no going back,” Dr. Genden said. “It’s like when you get on a rocket ship.”

At times, he felt “in a dreamlike state,” he said. When the blood vessels were finally connected, the donor trachea began bleeding. “This thing came to life,” Dr. Genden marveled, “and we were like, ‘Holy smokes, we’ve done it.’”

“I can breathe,” she was amazed to discover. “I could feel it in my lungs.”

After several weeks in recovery, she is home. She visits Mount Sinai weekly for blood work. Dr. Genden examines the new trachea by inserting a scope in a hole he left in her neck, which he’ll eventually close.

Recently, Ms. Sein, covering the hole with her hand to speak, enthused about having the energy to cook sesame chicken for the first time and how she aims to visit relatives in Puerto Rico. Next month, she will turn 57.

“We would have been planning my funeral,” she said, “but now we’re planning a birthday party.”

Could a Blood Test Show if a Covid-19 Vaccine Works?