Home » Health » The Next Trick: Pulling Coronavirus Out of Thin Air 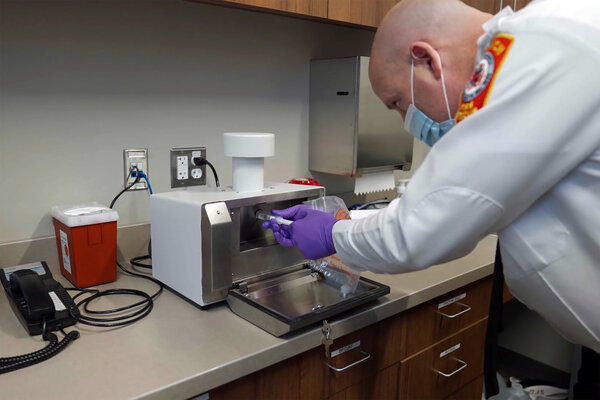 A decade ago, when the firefighter John Burke earned his master’s degree in health care emergency management, he wrote his thesis on pandemic planning. So when the coronavirus hit last spring, Mr. Burke, now the fire chief in Sandwich, Mass., was ready.

“I had my playbook ready to go,” Mr. Burke said.

Testing for the virus was a top priority, so he connected with a private laboratory to ensure that his firefighters, who were transporting coronavirus patients to hospitals, could be regularly tested.

And then he heard that Thermo Fisher Scientific, a Massachusetts company that makes laboratory equipment and materials, was beta testing an air sampler that could help him detect airborne coronavirus particles

By December, he had installed one in a fire station hallway. The device, about the size of a toaster oven, sucked in ambient air and trapped airborne virus particles — if there were any to be found — in a specialized cartridge. Each afternoon, an employee would remove the cartridge and walk it to the UPS drop box across the street, sending it off for laboratory analysis.

Before the month was out, the air sampler had turned up traces of the virus. Officials ultimately traced it back to a town employee who had been working in the station, without a mask, during a quiet holiday period.

It was proof of concept for Thermo Fisher Scientific’s AerosolSense Sampler, which the company was making publicly available on Wednesday. The device, the company says, can be used to detect a variety of airborne pathogens, including the coronavirus. It could be deployed in hospitals, offices, schools and other buildings to monitor for signs of the virus as society begins to reopen.

The AerosolSense, which will sell for $4,995, is not the first air sampler capable of capturing the coronavirus; scientists have used several other models to study the pathogen over the past year. But the new device appears to be simpler and more accessible, experts said.

“I’m not sure that there’s anything else on the market that’s as easy to use,” said Linsey Marr, an expert in airborne viruses at Virginia Tech. “This will enable collection of air samples by almost anyone.”

Thermo Fisher Scientific is likely to face competition. The pandemic has galvanized interest in a once-niche area of disease surveillance — pulling pathogens out of thin air. Experts in the field say they have been inundated with calls and emails from companies, organizations and other laboratories interested in developing or using coronavirus-collecting air samplers. (Dr. Marr is consulting with one company, whose name she could not disclose, to develop an air sampler that would monitor for the virus in public places.)

And in November, the Defense Advanced Research Projects Agency began soliciting proposals for research to develop a coronavirus-detecting air sensor.

“There’s a tremendous amount of interest,” said John Lednicky, a virologist at the University of Florida.

The approach has real potential, experts say. But it also raises a thicket of logistical questions, they add, and must be deployed carefully, with a clear understanding of what the technology can and cannot do.

Air samplers are already widely used to detect a variety of pollutants. But capturing airborne viruses is considerably more difficult. Viral aerosols are tiny and compose just a small fraction of the detritus that floats around in the air.

“You’re looking for a needle in a haystack in a field of haystacks,” Dr. Marr said.

That means that most air samplers need to inhale a lot of air to capture bits of virus, and even then they may not capture viruses present at low levels.

The technology is improving, experts said, but remains complicated and labor-intensive. “There are very few places that have the knowledge, the equipment and the virology capability to do this properly,” Dr. Lednicky said.

The AerosolSense sampler was designed to be easy to use. The device draws air into a collection pipe and directs it toward a replaceable, cylindrical cartridge. The cartridge, which is about the size of a 10-milliliter syringe, contains a proprietary foamlike substance that traps viral particles.

After a few hours, or longer, the cartridge can be pulled out of the machine and sent to a lab for analysis. Technicians can use P.C.R., the polymerase chain reaction technique that underlies the gold-standard test for Covid-19, to determine whether genetic material from the coronavirus is present.

It can take a day or two to receive results if the cartridge needs to be shipped to a third-party laboratory, but hospitals, universities and nursing homes that have labs on site can process the cartridges within a few hours, Thermo Fisher Scientific says.

The company has also conducted “initial feasibility testing” with a rapid P.C.R. test that returns results in 30 minutes. (The test is made by Mesa Biotech, which Thermo Fisher Scientific recently acquired.) 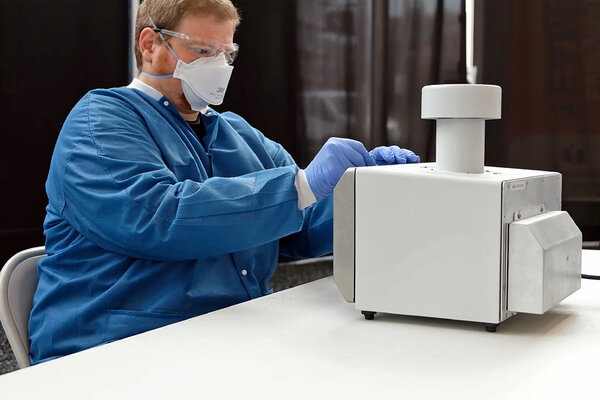 A series of studies — performed in an enclosed box, a 9-by-14-foot room and the hospital rooms of Covid-19 patients — suggested that the AerosolSense sampler could capture the coronavirus even when present at low levels, said Kevin Van Den Wymelenberg, who conducted the research and directs the Biology and the Built Environment Center at the University of Oregon.

“We’re confident that this is sensitive enough to use in real-world environments with Covid-positive individuals,” he said.

(The research, which has not yet been published in a scientific journal, was funded by Thermo Fisher Scientific.)

Thermo Fisher Scientific also piloted the samplers in a Covid-19 field hospital in Worcester, Mass. The hospital deployed the devices in patient care areas, where the virus was expected to be found, and in staff break rooms, where it was not.

“Our cold zones were indeed cold,” said Dr. John Broach, an emergency physician at UMass Memorial Medical Center and the medical director of the field hospital. “And our hot zone had heavy contamination, which was expected.”

Thermo Fisher Scientific, which will focus on hospitals in the first phase of its rollout, says other health care facilities could use the samplers to make sure that their Covid protocols are working — and that the virus is not making its way out of patient rooms.

“We see the facilities asking, are their scheduling and pre-screening activities effective?” said Mark Stevenson, the executive vice president and chief operating officer of Thermo Fisher Scientific. “Are their cleaning and ventilation procedures adequate? And consequently, can I give my patients confidence in their visit to the facility?”

Of course, detecting the virus in the hospital room of a Covid-19 patient is one thing, said Alex Huffman, an aerosol scientist at the University of Denver: “It’s another step to go into an environment that likely has much lower concentrations still, surveilling a classroom or a medical clinic where you have no idea if there’s going to be somebody positive or not.”

And an air sampler is not a silver bullet, said Mr. Burke, who made sure that his firefighters continued to wear masks, socially distance and get regular Covid tests even after he installed the air sampler.

“It can’t be like a smoke detector in your house where you’re, like, ‘I’m just going to have the machine, I’m not going to do anything else, it will let me know when there’s a problem,’” he said.

There are not yet any truly autonomous viral samplers, which still require humans to remove and analyze the samples. That takes time — and means that the results provided by these samplers are not real-time snapshots but composite portraits of a building over the previous two or 12 or 24 hours.

And although P.C.R. analysis can reveal whether genetic material from the coronavirus is present, it cannot distinguish between intact, infectious virus and viral fragments that pose no risk.

None of these drawbacks are dealbreakers, said Dr. Marr, who noted that it was still useful to know whether airborne coronavirus particles were in a space recently.

“If they’ve detected it in air, then it’s probably fairly freshly emitted,” she said. “And I’d be willing to bet that there is some infectious virus in there.”

But the results need to be interpreted with care. A negative result does not mean that there is no virus present — simply that the air sampler did not collect any.

“There’s a high chance for false negatives, because viruses are in notoriously low concentrations in the air,” said Kristen Coleman, an expert in bioaerosols at Duke-NUS Medical School in Singapore.

Figuring out how to respond to a positive sample might prove even trickier. “I don’t think the answer is just evacuate the building,” Dr. Van Den Wymelenberg said.

Instead, he imagined a suite of more measured responses — from increasing ventilation rates to strategic testing and tracing — that organizations could adopt when they found signs of the virus.

But convincing office workers that a temporary ventilation boost makes it safe to come into an office where the virus has been found could be a hard sell. And even these modest measures could prompt concerns about privacy and legal liability.

“I have been talking with several large building owners about indoor environmental surveillance throughout this pandemic, and the question of how is this information going to be used and who holds liability for any misapplication of the information always comes up,” Dr. Van Den Wymelenberg said.

(Mr. Burke made sure to clear use of the air sampler with the local unions, which were, he said, “100 percent supportive.”)

Another approach might be to use air sampling for larger-scale surveillance. If public health authorities see a spike in viral levels in a certain region or neighborhood, this could be an early warning sign that a surge of new Covid-19 cases is coming — and that officials need to step up their testing and contact tracing.

“In the medium and long term, I think technology like this has a tremendous role to play in continuing to push forward the state of knowledge about these things such that we can make better decisions that help with other viral aerosols, like influenza and the next pandemic that comes along,” he said. “That’s not to say it can’t help now, but I think its real influence may be even greater as we go further and further into the future.”