In patients with congenital defects or who have suffered accidental injuries, the jawbone is nearly impossible to replace. Curved and complex, the bone ends with a joint covered with a layer of cartilage. Both parts must withstand enormous pressures as people chew.

“It is one of the most loaded bones in the human body,” said Gordana Vunjak-Novakovic, a professor of biomedical engineering, medicine and dental medicine at Columbia University in New York.

In a paper published in Science Translational Medicine on Wednesday, she and her colleagues reported a surprising success: They managed to grow replacement bones, along with their joints, from the stem cells of pigs. A clinical trial will soon begin in patients with severe birth defects.

The researchers say they hope the same sort of technique can someday be used to grow other replacement bones and joints, including knees. Even if the strategy works, however, it will be years before those who need new jawbones or joints can have them engineered from their own cells.

Dr. Sidney Eisig, chair of hospital dentistry at Columbia University, said the work had begun in part because of frustration with the options available to surgeons like him.

When a patient needs a replacement jawbone, grafts from other parts of the body can be impractical. They may not have the correct shape — most bones are straight and relatively flat, while jawbones are curved.

“It is hard to take a straight piece of bone and put a curve on it,” Dr. Eisig said. In addition, there may be insufficient quantity, and taking grafts requires a second surgical site on the patient. 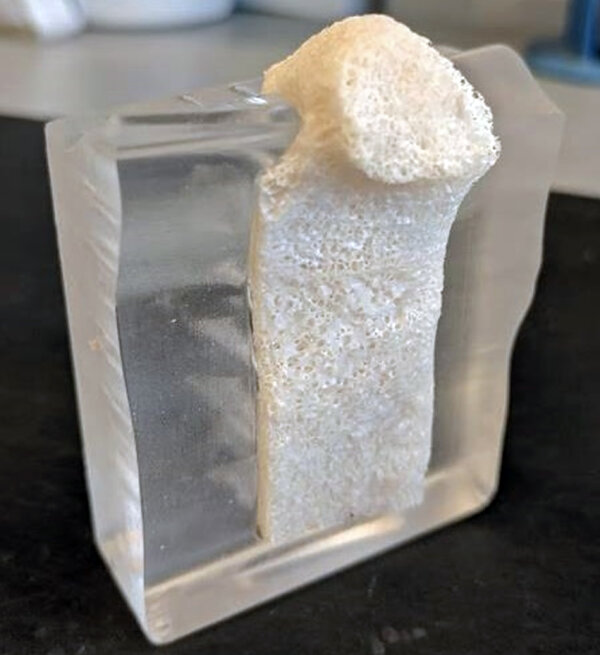 Metal prostheses can replace the joint to which the jawbone attaches — the temporomandibular joint, or TMJ. Prostheses are used in patients who have arthritis so severe that it destroys the joint, making it difficult and very painful to open the mouth even a bit.

Those artificial joints, though, have not been studied long-term to see how well they endure, said Dr. Tara Aghaloo, a maxillofacial surgeon at the University of California, Los Angeles, who was not involved in the study.

It’s difficult for surgeons to know whether these prostheses should be used in younger patients with severe arthritis, and a significant proportion of patients are allergic to the metal in the joints.

“I always thought there has to be a better way to do this,” Dr. Eisig said.

About 10 years ago, he noticed a scientific paper by Dr. Vunjak-Novakovic in which she reported engineering a human TMJ condyle — a relatively small piece of bone shaped like a knuckle — from stem cells she had taken from human fat.

He urged Dr. Vunjak-Novakovic to make a curved bone, with the joint, in a larger animal. They decided a pig would be ideal — the animals have jaw joints similar to those of humans.

She and her colleagues needed a way to shape the jawbone and opted to use cow bones as a sort of scaffolding. The bones, from which cow cells had been removed, were shaped with computer-guided milling so that each bone would be made precisely for an individual animal.

The stem cells needed to create bone were derived from the pigs’ own fat, removed with liposuction. The investigators designated one group of stem cells to turn into bone and placed them inside the scaffold.

The team directed another group of stem cells to grow into cartilage, placing those cells atop the scaffold. Five weeks later, the new bone-cartilage grafts were ready.

The team shipped the bones to Louisiana State University, where collaborators inserted them into pigs whose jawbones had been removed. “As soon as they woke up, they started to move around and started to eat,” Dr. Vunjak-Novakovic said.

The observation that the animals could eat right away was an encouraging sign.

Six months later, the researchers sacrificed the animals and examined the new bones. The cow bone scaffold had been reabsorbed into the pigs’ bodies. What was left was a jawbone indistinguishable from the one that had originally been there.

The clinical trial will involve six patients who have shortened faces with an open bite. Surgeons will rotate their jaws and put in an engineered bone to close the gap, making their faces longer so they can close their mouths.

Dr. Eisig said he has waited decades for an advance like this one. “It’s preliminary, but it is very exciting,” he said. “I’m glad it is happening while I’m still practicing.”