Public health officials have warned of “worrying signs” of infection among the elderly, as an official measure indicated the UK’s epidemic is growing again.

The R number was raised to between 1 and 1.2 for the first time since March.

Any number above one indicates the number of infections is increasing.

The number of new daily confirmed UK cases of the virus rose to 3,539 on Friday – an increase of more than 600 on the previous day.

The virus is still at much lower levels across the UK than at the peak in April, but a study of thousands of people in England found cases doubling every seven to eight days.

It found a marked rise in infections in the north and among young people.

Yvonne Doyle, medical director at Public Health England, said although younger people made up the greatest share of new cases, “we’re now starting to see worrying signs of infections occurring in the elderly, who are at far higher risk of getting seriously ill”.

A PHE report says there has been “a particularly steep increase” in positive test results in the over-85s and, in the north-west of England, a rise in people from that age group being admitted to hospital.

However, though cases are rising, the number of patients in hospital remains largely flat at 863.

Of those, 78 are on ventilators, according to the latest government figures.

Meanwhile, Birmingham will become the latest area to bring in new restrictions after a spike in cases.

Tougher restrictions now cover more than 1.75m people in the west of Scotland and, from Monday, face masks must be worn in shops in Wales.

However, lockdown restrictions will be eased further in Leicester on Tuesday to bring rules for businesses in the city more in line with the majority of England, the Department of Health said.

The city has been subject to tighter Covid-19 restrictions since 29 June after a rise in cases.

Across the UK, new laws on how many people can socialise are being introduced from Monday in an attempt to hold back the rise in infections.

The “rule of six” will restrict indoor and outdoor gatherings in England, Scotland, Wales and Northern Ireland. 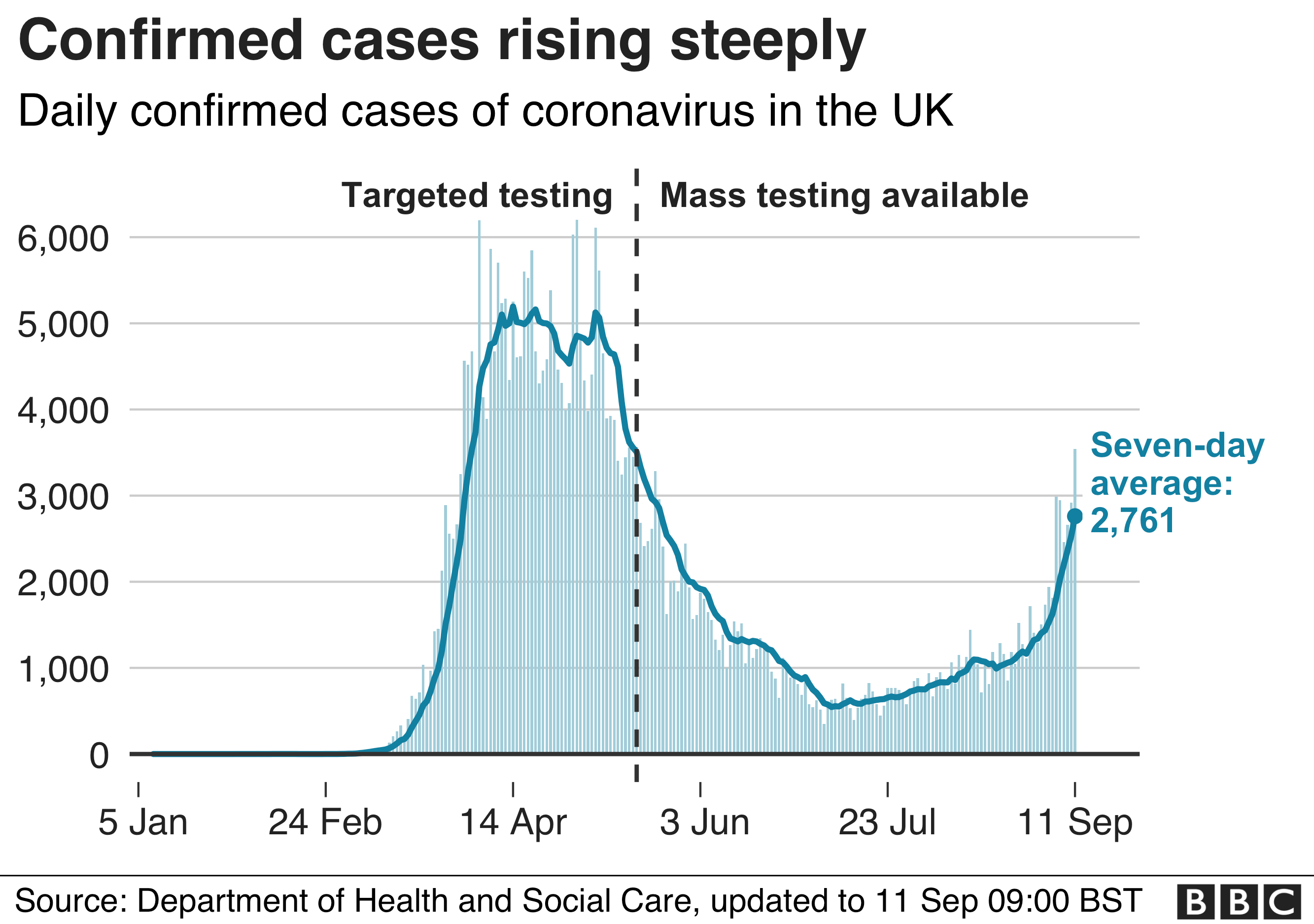 Police warned there was a “real risk” some people would treat this weekend as a “party weekend” before the new restrictions come in.

John Apter, national chairman of the Police Federation of England and Wales, said that would be “incredibly irresponsible” at a time of increasing cases and officers would “make no apology” for fining people where appropriate.

The rise in the R (reproduction) number – which describes how many others each infected person passes the virus on to – is one of several measures indicating the virus is spreading more widely in the UK.

If the R number is higher than one – as now – the numbers infected are growing, with higher numbers indicating that cases are multiplying more quickly.

Three other large studies have also indicated a widespread resurgence of coronavirus across the UK population.

‘A wake-up call for the nation’

The UK is entering a new stage of the coronavirus pandemic.

Since lockdown, we have been deciding how to react to falling cases. But now the R number has gone above the crucial level of 1 for the first time since March and is backed up by reams of data showing cases are growing again.

This is not just contained to hotspots like Bolton – one government adviser told me the rise was widespread across the country.

They said today was a “wake-up call” for the nation. There are already some signs that the number of people being admitted to hospital is starting to rise.

But this is not a repeat of the build-up to lockdown. Cases are at a much lower level and they are growing more slowly.

Pre-lockdown, the R number was around three and cases were doubling every three to four days. It is around half that now.

Coronavirus is going to be a major challenge until we have a vaccine.

So the defining question as we head into a potentially difficult winter is how to balance keeping the virus in check with getting on with our lives.

The REACT study of more than 150,000 volunteers in England, one of the three new sources of data on community levels, found “accelerating transmission” at the end of August and start of September.

It said levels of infection were rising across England but particularly in the north east, north west and Yorkshire.

And there were increases in positive cases in all age groups up to the age of 65, with highest rates of growth in 18-24 year olds.

Prof Paul Elliott, director of the study at Imperial College London, said the data clearly showed “a concerning trend in coronavirus infections” where cases are growing quickly across England and “no longer concentrated in key workers”.

He said there was evidence of “an epidemic in the community” which was not the result of more people being tested.

The second set of data, from the Office for National Statistics (ONS) estimates there were 39,700 new cases of the virus in England during the first week in September – 11,000 more than the previous week.

The ONS bases its figures on thousands of swab tests carried out in households, whether people have symptoms or not.

It estimated no increase in cases for the same week in Wales, but First Minister Mark Drakeford has announced people must now wear face masks in shops in response to rising case numbers in recent days.

Katherine Kent, from the ONS infection survey, said the results suggested “an increase in Covid-19 infections in England during recent weeks, with higher infection rates among 17-34 year olds”.

Nicola Sturgeon has warned that the average number of cases in Scotland has been “more than trebling every three weeks” with some areas of particular concern, including Lanarkshire and Greater Glasgow and Clyde.

And the third set of figures, from the Covid symptom study app, which tracks the health of nearly four million people in the UK, also suggests a growth in new cases since the end of August – the first time since mid-June there has been a significant rise in numbers.

Prof James Naismith, from the University of Oxford, said younger people would also have been affected to the same extent in January if testing had been available.

“We know that medical treatment and scientific advances have improved significantly, thus even with infection rates as bad as March and April, there will be many fewer deaths.

“The more people wash their hands and practise social distancing – especially by and around the vulnerable – the lower the number of deaths and illness we will see,” he said.