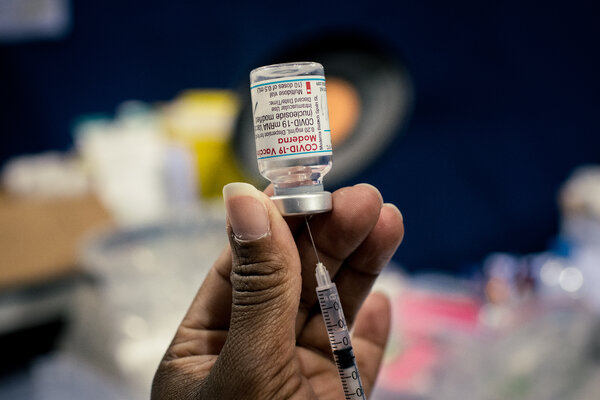 The Pfizer-BioNTech and Moderna coronavirus vaccines are 94 percent effective at preventing hospitalization in fully vaccinated adults 65 or older, according to a small study released by the Centers for Disease Control and Prevention on Wednesday.

The findings, which are consistent with the clinical trial results, are the first real-world evidence from the United States that the vaccines protect against severe Covid-19. Older adults are at the highest risk of hospitalization and death from the disease. More than 573,000 people have died across the country related to the virus, according to a New York Times database, and as of Tuesday, 141.8 million people have received at least one dose of one of three federally authorized vaccines, including about 96.7 million people who have been fully vaccinated.

“These findings are encouraging and welcome news for the two-thirds of people aged 65 and up who are already fully vaccinated,” Dr. Rochelle Walensky, the C.D.C. director, said in a statement. “Covid-19 vaccines are highly effective and these real-world findings confirm the benefits seen in clinical trials, preventing hospitalizations among those most vulnerable.”

The study is based on data from 417 patients who were admitted to 24 hospitals in 14 states between January 1 and March 26. Approximately half were 75 or older.

Both the Pfizer and Moderna vaccines require two shots, spaced three to four weeks apart. Older adults who were partially vaccinated — that is, they had received one dose of the vaccine more than two weeks prior — were 64 percent less likely to be hospitalized with the coronavirus than unvaccinated seniors, the researchers reported.

The vaccines did not reduce hospitalization rates in people who had received their first dose less than two weeks prior. The body requires time to mount an effective immune response, and people are considered fully vaccinated two weeks after the last dose in the series.

“This also highlights the continued risk for severe illness shortly after vaccination, before a protective immune response has been achieved and reinforces the need for vaccinated adults to continue physical distancing and prevention behaviors,” the scientists wrote.

Virus May Have Arrived in U.S. in December, but Didn’t Spread Until Later