A year into the pandemic, the disposable, virus-filtering N95 mask remains a coveted piece of protective gear. Continuing shortages have forced doctors and nurses to reuse their N95s, and ordinary Americans have scoured the internet — mostly in vain — to get them.

But Luis Arguello Jr. has plenty of N95s for sale — 30 million of them, in fact, which his family-run business, DemeTech, manufactured in its factories in Miami. He simply can’t seem to find buyers.

After the pandemic exposed a huge need for protective equipment, and China closed its inventory to the world, DemeTech, a medical suture maker, dived into the mask business. The company invested tens of millions of dollars in new machinery and then navigated a nine-month federal approval process that allows the masks to be marketed.

But demand is so slack that Mr. Arguello is preparing to lay off some of the 1,300 workers he had hired to ramp up production.

“It’s insane that we can’t get these masks to the people who desperately need them,” he said.

In one of the more confounding disconnects between the laws of supply and demand, many of the nearly two dozen small American companies that recently jumped into the business of making N95s are facing the abyss — unable to crack the market, despite vows from both former President Donald Trump and President Biden to “Buy American” and buoy domestic production of essential medical gear. 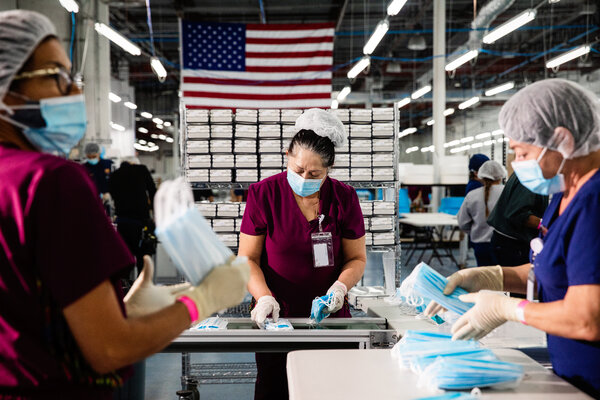 These businesses must overcome the ingrained purchasing habits of hospital systems, medical supply distributors and state governments. Many buyers are loath to try the new crop of American-made masks, which are often a bit more expensive than those produced in China. Another obstacle comes from companies like Amazon, Facebook and Google, which banned the sale and advertising of N95 masks in an effort to thwart profiteers from diverting vital medical gear needed by frontline medical workers.

What’s required, public health experts and industry executives say, is an ambitious strategy that includes federal loans, subsidies and government purchasing directives to ensure the long-term viability of a domestic industry vital to the national interest.

“The government needs to call the outsourcing of America’s mask supply what it is: a national security problem,” said Mike Bowen, the owner of Prestige Ameritech, a Texas mask producer, who has testified before Congress about the need to support domestic manufacturers.

Drawing on his experiences during the swine flu pandemic of 2009, he said many of the start-ups were unlikely to survive without systemic change. “We’ve seen this movie before,” said Mr. Bowen, a 35-year veteran of the industry. “If and when the pandemic is over, it’s going to be a freaking blood bath.”

Spurred in part by the wartime Defense Production Act, domestic heavyweights like 3M and Honeywell have ramped up production of N95 masks over the past year, but the 120 million masks they churn out each month in the United States cannot satisfy the health sector’s annual need for 3.5 billion N95s. Most of the masks made by the big players are funneled to medical distributors supplying the country’s large hospital systems.

Smaller companies could help fill the gap. Together, 19 companies that have recently received federal certification produce tens of millions of masks a month; Northwell Health, a large hospital chain, has been using a total of 300,000 masks a month in its 23 hospitals.

The businesses include Protective Health Gear, a New Jersey start-up founded by a chiropractor and a store display executive that has been struggling to find steady customers, and ALG Health, a lighting company that produces 1.5 million masks a month in Bryan, Ohio, but can’t obtain the final investment needed to fulfill its goal of producing 30 million a month.

Unlike his predecessor, Mr. Biden has made face coverings a key component of his plan to contain the pandemic. In one of his first acts as president, Mr. Biden directed federal agencies to aggressively use the D.P.A. to boost domestic manufacturing of personal protective equipment, and a subsequent executive order seeks to encourage the government purchase of domestically made goods. Still, none of the half-dozen start-ups interviewed for this article said they had been contacted by federal officials.

“I’m encouraged by the Biden administration’s initial steps,” said Scott Paul, president of the Alliance for American Manufacturing, an industry group. “But the federal government really needs to step up its game and provide certainty to American companies that answered the national call to action, not just for this crisis, but for those in the future.”

Tim Manning, the White House’s Covid-19 supply coordinator, said the administration would announce a number of new D.P.A. contracts for personal protective equipment in the coming weeks, but that the larger supply-chain issues would take longer to address.

“One of our priorities in our pandemic response is doing this in a way so we can ensure the industrial base expansion that has happened can be sustained, so we don’t end up in the same situation the next time,” Mr. Manning said in an interview.

Companies like United States Mask, a start-up in Fort Worth, Texas, which began producing N95s in November, may not be able to hold out much longer. John Bielamowicz, a commercial real estate broker who started the company with a friend in the early weeks of the pandemic, said he has been frustrated by the lack of interest from the hospital chains, long-term care facilities and local governments that buy in bulk.

Although the company’s masks have been certified by the National Institute for Occupational Safety and Health, a division of the Centers for Disease Control and Prevention, Mr. Bielamowicz says many buyers are reluctant to give unfamiliar products a try. Big hospitals prefer to stick with masks they already use because of the time-consuming need to fit-test new models on employees. But many cost-conscious bulk buyers prefer to purchase cheaper Chinese ones.

No known COVID-19 outbreak in Downtown Eastside, but a ‘matter of time’ before infections rise: mayor

Temporary free parking at B.C. hospitals due to COVID-19 crisis