SINGAPORE (Reuters) – Asia’s stock markets crashed on Friday as panic gripping world financial markets deepened, and even haven assets such as gold and bonds were ditched to cover losses in the wipeout. 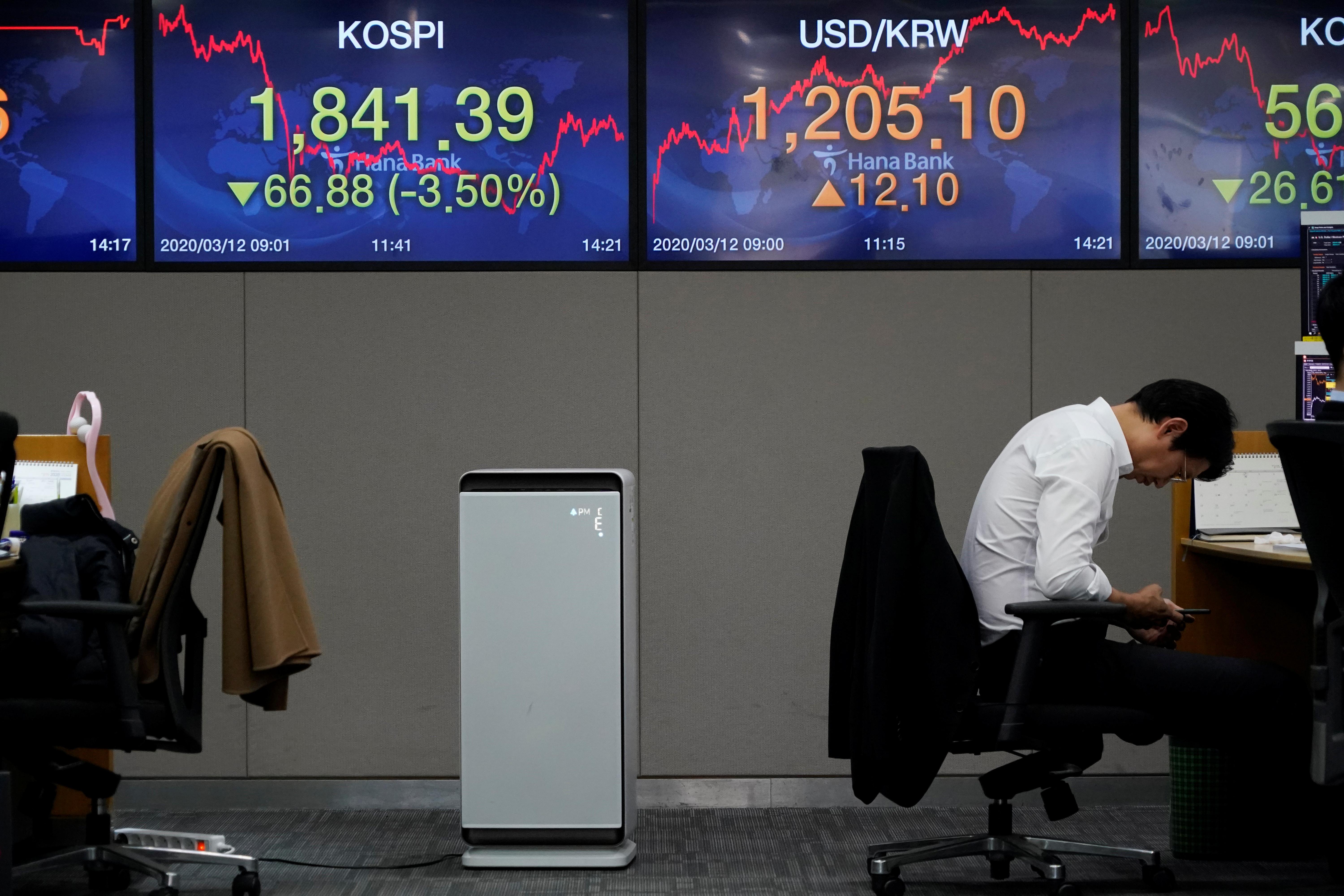 Japan’s Nikkei .N225 was in freefall, dropping 10% and heading for its worst week since the 2008 financial crisis. Not one stock on the index is in positive territory. [.T]

MSCI’s broadest index of Asia-Pacific shares outside Japan .MIAPJ0000PUS fell 2% and is down 12.8% this week.

Australia’s benchmark fell 7.6% and is set for its worst week on record, while in South Korea the won was shredded and the Kosdaq .KQ11 fell 8%, triggering a short trading halt.

“There is a sense of fear and panic,” said James Tao, an analyst at stockbroker Commsec in Sydney, where phones at the high-value client desk rang non-stop.

“It’s one of those situations where there is so much uncertainty that no-one quite knows how to respond…if it’s fight or flight, many people are choosing flight at the moment.”

The plunge, as the coronavirus pandemic spreads, gathered pace after U.S. President Donald Trump spooked investors with a move to restrict travel from Europe, and after the European Central Bank disappointed markets by holding back on rate cuts.

Trade was halted on the S&P 500 .SPX. after it hit downdraft circuit breakers. It fell further when trade resumed, eventually losing 9.5% to close 27% below February’s peak.

Gold XAU=, usually a safe harbour in times of panic, fell 3.5%, yields on long-dated U.S. Treasuries shot up – where they mostly held on Friday. [US/] [GOL/]

“Wherever anyone has any risk, people just want to bring risk back to flat at the moment, that’s what happening,” said Stuart Oakley, Nomura’s global head of flow FX in Singapore

“This is what happens when you get what’s known as a value-at-risk shock, where people have drawn down so much P&L that they just need to draw down all risk.”

The VIX volatility index – Wall Street’s “fear gauge” – and an equivalent measure of volatility for the Euro Stoxx 50 .V2TX hit their highest since the 2008 financial crisis.

In a televised address late on Wednesday, U.S. President Donald Trump imposed restrictions on travel from Europe to the United States, shocking investors and travellers.

Traders were disappointed after hoping to see broader measures to fight the spread of the virus and blunt its expected blow to economic growth.

The New York Federal Reserve surprised by pumping huge amounts of cash into the banking system, aiming to head off the sort of dislocation that saw markets seize up during the financial crisis more than a decade ago. 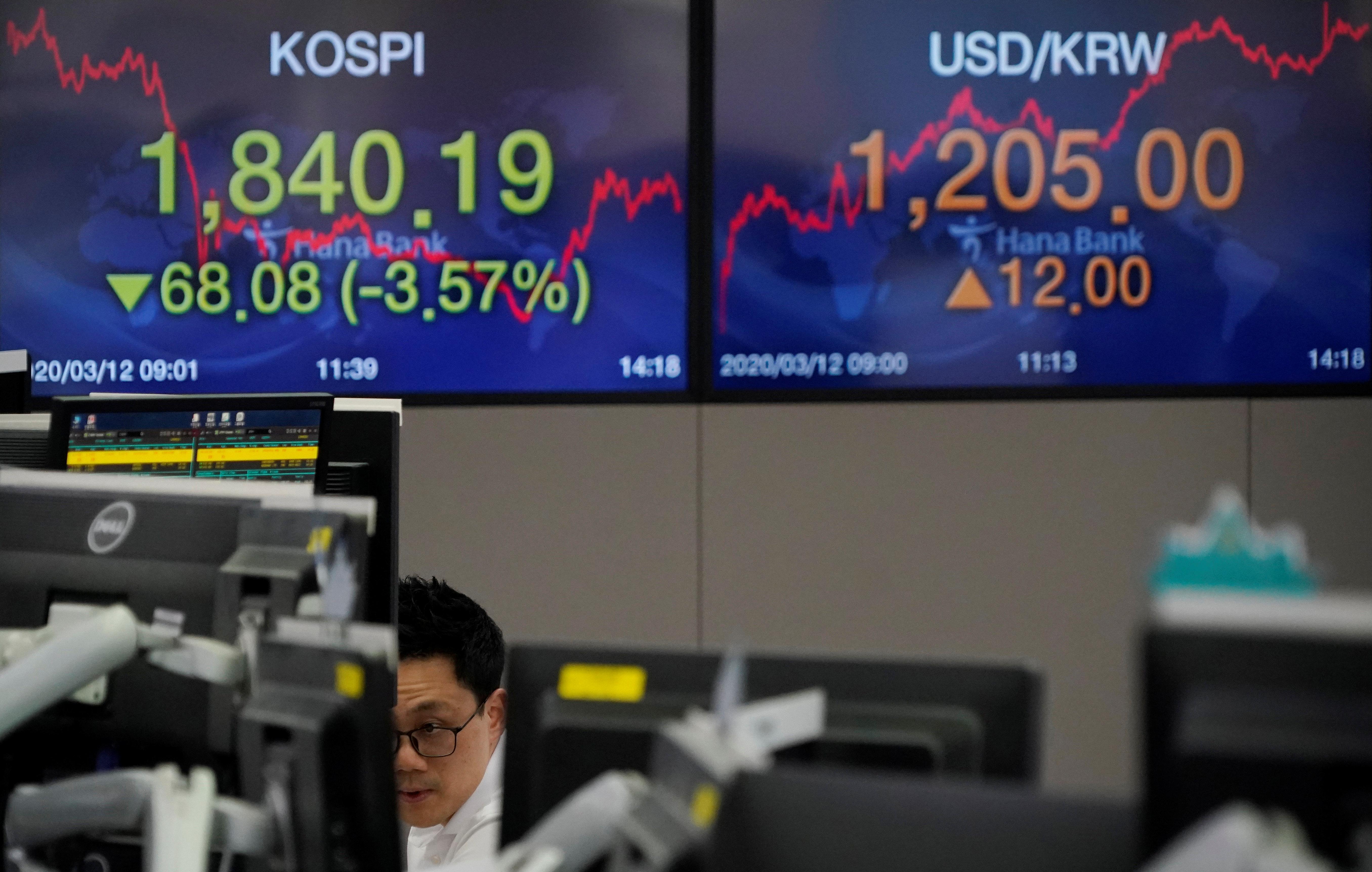 After adding $500 billion on Thursday, it will inject another $1 trillion today in an effort to stop borrowing costs from rising. Australia’s central bank injected an unusually large $5.5 billion into the financial system on Friday.

In early Asia currency trade, the dollar did its best to hold gains against most major currencies after a blowout in swap spreads showed investors are facing a greenback shortage.