Home » Business » Why Our Monsters Talk to Michael Wolff

It’s early 2019, a few months before Jeffrey Epstein will be arrested on sex charges, and he is sitting in the vast study of his New York mansion with a camera pointed at him as he practices for a big “60 Minutes” interview that would never take place.

The media trainer is a familiar figure: Steve Bannon, Donald Trump’s campaign guru and onetime White House adviser. Mr. Bannon is both conducting the interview and coaching Mr. Epstein on the little things, telling him he will come across as stupid if he doesn’t look directly into the camera now and then, and advising him not to share his racist theories on how Black people learn. Mainly, Mr. Bannon tells Mr. Epstein, he should stick to his message, which is that he is not a pedophile. By the end, Mr. Bannon seems impressed.

This explosive, previously unreported episode, linking a leader of the right with the now-dead disgraced financier, is tucked away at the end of a new book by Michael Wolff, “Too Famous: The Rich, the Powerful, the Wishful, the Notorious, the Damned.” Mr. Bannon confirmed in a statement that he encouraged Mr. Epstein to speak to “60 Minutes” and said that he had recorded more than 15 hours of interviews with him.

He disputed Mr. Wolff’s characterization of the transcript, however. Mr. Bannon, who has made 15 documentaries, said that he “never media-trained anyone” and was recording the interview for a previously unannounced eight- to 10-hour documentary meant to illustrate how Mr. Epstein’s “perversions and depravity toward young women were part of a life that was systematically supported, encouraged and rewarded by a global establishment that dined off his money and his influence.”

Mr. Bannon was a major character — and a great on-the-record source — for Mr. Wolff’s biggest success, “Fire and Fury,” his best-selling, no-holds-barred account of the Trump White House. To write about Mr. Bannon’s dealings with Mr. Epstein in the new book, Mr. Wolff relied on transcripts of what Mr. Epstein appears to believe are practice interviews. Where did he get the transcripts, not to mention a raft of other new details about the last days of Mr. Epstein’s life? Mr. Wolff won’t say, and his narrative method is no help either. As usual, he relies on an omniscient third-person narration in “Too Famous,” an approach that has for decades drawn criticism from reporters like me because it does not bother to include explanations of how the author came by his information.

I met with Mr. Wolff on Tuesday in Amagansett, on Long Island. He was dressed in white, and his white hair was cropped short. He welcomed me into his second home, a bright, airy place that he was able to buy, for $3 million, thanks to “Fire and Fury,” which sold more than five million copies, according to the publisher, allowing him to finally afford the lifestyle he had already been living.

Mr. Wolff, 68, has been at this since before I had a byline, infuriating his rivals by the access he gets, the stories he tells and the gleeful way he tells them. And he has been the subject of pieces like this one — scolding profiles of the journalist enfant terrible and New York media scenester — for decades.

He has managed to stay at the top of his game because of his undying interest and expertise in a particular subject: big, bad men. What Oprah Winfrey is to tearful celebrities and earnest royals, Mr. Wolff is to louche power players. The litany is astounding: Roger Ailes, Rupert Murdoch, Harvey Weinstein, Boris Johnson, Mr. Bannon, Mr. Trump. All appear in his new book, a collection of profiles, some previously published, some not.

Magnates seem to think Mr. Wolff gives them their best shot at a sympathetic portrait. He writes, in “Too Famous,” that Mr. Weinstein called him during his 2020 rape trial to propose a biography. “This book is worth millions,” Mr. Weinstein told him, according to Mr. Wolff. “You keep domestic, I’ll take foreign.” As for Mr. Epstein? “He wanted me to write something about him — a kind of a book — it wasn’t clear why,” Mr. Wolff told me.

Few women appear in “Too Famous.” Tina Brown, Arianna Huffington and Hillary Clinton are the exceptions. “These are the women, and there are not too many, who have done exactly what men would do,” he said. And Democrats rarely talk to him. “They don’t have a sense of play,” he said.

So what is it about Michael Wolff that has brought him so close to the egomaniacs of our time? If I had his confidence about getting into other people’s minds, I’d say it was because they see themselves reflected, maybe even envied, in his large eyes, which open a little wider when he wants you to keep talking.

He became friendly with a number of moguls in the 1980s and 1990s when, after a promising start as a writer, he took a run at joining their club himself. He started a company, Wolff New Media, that published books about the internet when it was the new thing. In the mid-1990s, he was worth $100 million (on paper) and had a stipple portrait in The Wall Street Journal.

When it all came crashing down in 1997, he wrote about it, scorching the investors who had backed him in a jovial memoir, “Burn Rate.” The book earned him a column in New York magazine and a regular table at Michael’s, home of the power lunch for the Manhattan media set. 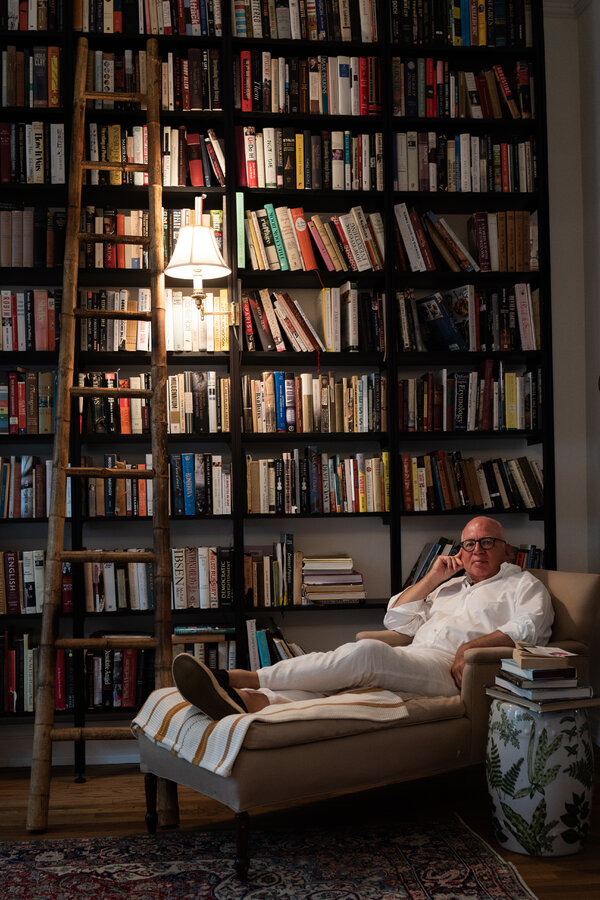 It’s a curious fact of journalism that it has many rules, but the most successful journalists seem to be the ones who are always breaking them. Mr. Wolff — who dislikes the j-word, and considers himself a writer — prefers blurred lines and compromised relationships to cut-and-dry journalism-school clarity.

When he talks with powerful men in finance and politics, he said, he falls into a bit of a Walter Mitty trance that he could be living their lives, something they can sense and appreciate. And given that many of these figures must choose to tell their stories either to rule-abiding journalists, who often view them as monsters, or to sycophantic lightweights, you can see the appeal of going with someone who can relate to your struggles. (Mr. Wolff’s divorce and remarriage received savage tabloid coverage.) And, he told me, he thinks that most of these reviled characters “are not as bad as everyone says,” adding, “Just the fact that everyone says it means they’re not.”

He is also able to gain the confidence of moguls because he lets them know he has the same enemies they do — that is, just about everyone in the news media, whom he has always made a point of disdaining. He bonded with Mr. Ailes, the former Fox News chief whose career ended in sexual harassment allegations, over shared Establishment enemies, he said. And he ingratiated himself with Mr. Trump and his circle, in part, by publicly attacking other reporters who covered him, sneering at one point that the beat covered by Maggie Haberman for The New York Times appeared to be the “aberrant” presidency.

When “Fire and Fury” arrived in 2018, however, it painted a more extreme picture of the president than most newspaper reports, even as it relied on many of the details unearthed by White House beat reporters. Mr. Wolff insisted that he hadn’t meant to deceive the people he was writing about — he was just surprised to find how bad it was on the inside.

He also argues that the fact-based, evenhanded approach of so much nonfiction writing these days has turned what used to be called magazine journalism into a lost art. He would rather not sully his text with such bothersome things as source attributions and footnotes, asking readers to simply trust him and the power of his narrative.

“I’m kind of the only one doing this stuff now,” he said over a dosa at Hampton Chutney, where, he noted, you can sometimes run into Paul McCartney. Mr. Wolff said he was the last one in the business of “journalism as the experience, journalism as writing.” Now, he said, “Everyone is more interested in the bill of particulars.”

A problem with this point of view is that a few of the greatest writers from the glory days of magazine journalism freely blended fact and fiction. And writers who stray too far from particular facts may end up getting the generalities wrong. Given that I hail from the bill-of-particulars school, I have found Mr. Wolff to be annoyingly accurate on big-picture questions ranging from the enduring strength of the television business to the secret motives of moguls.

I couldn’t write about these kind of blurred journalistic lines, of course, without disclosing my largely friendly relationship with Mr. Wolff. I first encountered him in 2009, when he profiled my then-employer, Politico, and wrote in passing that I was a “total dweeb” who was “the only one as interested in what his sources are doing as they themselves are.” I felt both insulted and pretty much seen.

After that, I sought him out for occasional career advice, which he gave generously. In 2014, he invited me to a dinner with executives at Uber, and neglected to ask me to agree that it was off the record. When I published one executive’s explosive suggestion to me that the company dig up dirt on the journalists who had been covering the company, Mr. Wolff, then a columnist for USA Today, blasted me in print as “a gotcha political blogger” who had grown “censorious and moralistic.” (Fair.) A couple of weeks later, he took further revenge by publishing an indiscreet comment I had made to him in private. I was furious. I also figured we were even. And when I was thinking last year about writing a book, I asked him how to do it. He told me, You start with a blank piece of paper, and on the top, you write the amount of money you want.

Mr. Wolff seems to be following his own advice as he cashes in on the success of “Fire and Fury” with his third book in four years. But he offers a scarce commodity in a media market that has moved away from his kind of journalism. A hot political environment has taught many reporters to see their work in moral, even didactic, terms. Magazine writers are out looking for heroes, not villains, and they appear to have little interest in understanding why our bad men do the things they do.

But monsters are fascinating. And Mr. Wolff “doesn’t have that sort of natural recoil to some of the more odious people in the world,” said Janice Min, his former editor at The Hollywood Reporter.

After we parted, he emailed me that he would prefer that his beat not be described as “elderly sex abusers.” It has simply turned out that the class of media moguls he covers “has turned out to, disproportionately, include many sex abusers,” he said.

That generation may, at last, be aging out, meaning Mr. Wolff risks running out of subjects. When I asked who will hold his interest in the years to come, he said he was “scouting the next generation” of powerful media figures.

“Too Famous” includes a few of them — Jared Kushner, Tucker Carlson and Ronan Farrow. And Mr. Carlson, for one, was happy to sit down with Mr. Wolff. “He is one of the last interesting people in American media,” Mr. Carlson texted me. “Anyone who doubts that should have lunch with him.”

Stocks under pressure as Trump vows to end violent protests