When Stephen A. Schwarzman arrived at President Trump’s Mar-a-Lago private social club in April 2017, expecting to join a cocktail party to kick off a summit meeting with President Xi Jinping of China, Mr. Trump’s aides turned him away.

Mr. Schwarzman, the chief executive of the Blackstone Group, the giant private equity firm, had helped arrange Mr. Xi’s visit — and thought he was invited. Mr. Trump told his aides that Mr. Schwarzman wasn’t, according to someone who was there.

The Wall Street veteran shrugged off the slight. Never a big player in politics, Mr. Schwarzman had been pulled into the role of adviser on business policy by Mr. Trump only a few months earlier — an opportunity that promised big benefits for Blackstone and a way to burnish his legacy — and he saw little point in complaining.

That steadfast support became a mainstay of his relationship with the White House. But the approach recently backfired, after Mr. Schwarzman’s sympathy for Mr. Trump’s position on the election results during a private call with business leaders and academics on Nov. 6 — details of which were leaked to the media — raised eyebrows among Blackstone investors and other business executives.

In a recent note to employees, Mr. Schwarzman called the Jan. 6 attack on the U.S. Capitol by Trump supporters an “insurrection” and “an affront to the democratic values we hold dear.” But he stopped short of criticizing Mr. Trump directly for inciting the violence.

Mr. Schwarzman’s reticence is hardly surprising. As an adviser, he gained a level of access to world leaders that helped Blackstone cement a $20 billion investment commitment from the Saudi Arabian government in 2017, a deal worth more than $100 million in annual fees if fully executed. A new trade agreement with China, negotiated in part by Mr. Schwarzman on behalf of the U.S. government and completed last January, promised to further open the country’s financial markets to Blackstone and other investors.

Mr. Schwarzman, who at 74 is the same age as Mr. Trump, also used his deal-making skills when there was no clear benefit to Blackstone. He helped the United States cut a new trade agreement with Mexico and Canada, countries where his firm has limited operations. He flew to Bahrain at the administration’s behest to discuss investment plans the White House had proposed for Palestinian territories. And he personally gave nearly $4 million to Mr. Trump’s inauguration and re-election efforts.

The private equity executive’s involvement with Mr. Trump was “an epic positive” for the country, said Marc Levine, the former chairman of the Illinois State Board of Investment, a pension fund that invests with Blackstone. Mr. Schwarzman was “helping provide some adult supervision for a maniac,” said Mr. Levine, who retired from that role in January 2019.

Over time, the benefits of Mr. Schwarzman’s alliance with Mr. Trump have proved elusive. Nearly four years after the Saudis committed up to $20 billion in Blackstone’s infrastructure fund, only $7 billion has materialized, thanks to sluggish fund-raising from third parties, whose participation was necessary to unlock the Saudi funds. Progress made on the Chinese trade agreement was overtaken by the pandemic. 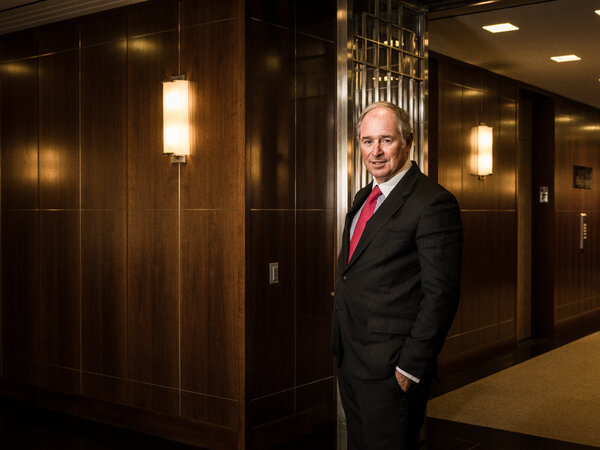 Mr. Schwarzman, who told people he felt obligated to help his country if asked, was not dissuaded. He viewed his advisory role as a chance to give back, say colleagues and friends. And after decades on Wall Street, he appeared to find it invigorating to have such a close engagement with public policy.

“His sole objective was to help achieve positive policy outcomes for the American people,” Christine Anderson, a Blackstone spokeswoman, said in a statement.

A lifelong Republican who favors lower taxes and spending, alongside beliefs like the need to preserve women’s reproductive freedom, Mr. Schwarzman had only occasionally gotten involved in the affairs of past administrations. He was not above taking lighthearted shots at what he regarded as wrongheaded Democratic policies during Blackstone’s Monday staff meetings, but his political activity didn’t stretch far beyond reminding Blackstone employees — the firm has a large Democratic contingent — to vote on Election Day, and writing checks to favored candidates.

Mr. Trump was not among them. So when the president-elect called Mr. Schwarzman shortly after his victory in 2016 and asked him to convene a panel of business advisers to discuss jobs and the economy, the executive was surprised, but willing, two colleagues said.

Mr. Schwarzman assembled a team of 15 fellow business leaders and policy experts, including Laurence D. Fink, the chief executive of BlackRock, and Robert A. Iger, then chief executive of the Walt Disney Company. The group tried to talk the president down from some ideas that weren’t backed by data, such as that China was a currency manipulator, The New York Times has reported. It also aired concerns to him about his proposed ban on travel and immigration from predominantly Muslim countries, which was widely disliked in the business community.

Later, when some members of the panel wanted to resign following Mr. Trump’s inflammatory remarks about deadly violence in Charlottesville, Va., Mr. Schwarzman drafted a statement announcing the group’s disbandment and alerted the president’s team — “it was basic courtesy to tell him,” Mr. Schwarzman wrote in his memoir, published in September 2019 — only for Mr. Trump to quickly announce that he was the one disbanding the panel.

Mr. Schwarzman had been courting a substantial investment from the Saudis for an infrastructure fund that would finance pipelines, roads or other physical assets in the United States. Although the Saudi government was a longtime investor in Blackstone funds, the president’s trip to Riyadh helped nail the $20 billion deal.

Mr. Schwarzman wrote in his memoir that he played intermediary between President Xi of China, who wanted to better understand the Trump administration, and Mr. Trump. President Trump then asked him to help arrange the Mar-a-Lago meeting, Mr. Schwarzman added — the same event from which Mr. Schwarzman was turned away.

From Riot to Impeachment

The riot inside the U.S. Capitol on Wednesday, Jan. 6, followed a rally at which President Trump made an inflammatory speech to his supporters, questioning the results of the election. Here’s a look at what happened and the ongoing fallout:

10 Things to Know About Clubhouse