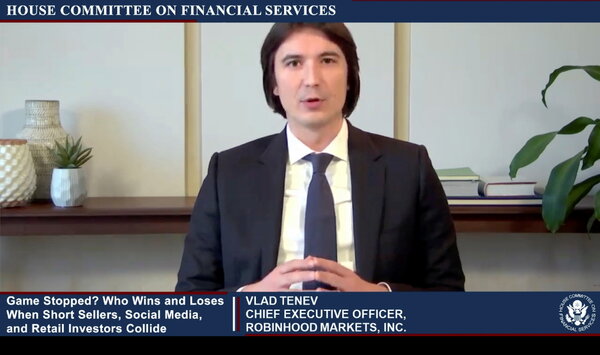 Robinhood in the hot seat

A House committee with more than 50 members held a hearing about GameStop and the meme-stock mania for five hours, featuring six witnesses. In the end, it was all about Robinhood. Vlad Tenev, the chief of the brokerage app, fielded the most questions, which often cast him as the villain of the saga.

“Don’t you see and agree that something very wrong happened here?” David Scott, Democrat of Georgia, asked Mr. Tenev. “And that you are at the center of it?”

What we learned about Robinhood. Mr. Tenev apologized for his company’s failings — without specifying which mistakes were made — but said his company broke no laws and didn’t prioritize Wall Street business partners over retail users. “We don’t answer to hedge funds,” he said.

After he repeatedly asserted that Robinhood customers had made $35 billion in realized and paper investment gains, Jim Himes, Democrat of Connecticut, pushed him on more specifics, which Mr. Tenev ultimately declined to give. Thus, Robinhood’s total assets under management remain a mystery.

When he said that Robinhood had curbed some customer trades because clearinghouses demanded more collateral from his firm, Alexandria Ocasio-Cortez, Democrat of New York, shot back that the brokerage may instead have failed to manage its own capital risks. Anthony Gonzalez, Republican of Ohio, pursued a similar line of attack, making it a bipartisan affair.

Several lawmakers criticized the Robinhood app’s so-called “gamification” approach, where trades are celebrated with virtual confetti and made to feel more fun. “You are encouraging your customers to tap 1,000 times a day,” said Ritchie Torres, Democrat of New York. Mr. Tenev responded, “We wanted to give our customers delightful features.”

Sean Casten, Democrat of Illinois, accused the company of taking advantage of inexperienced traders, including a customer who died by suicide after believing he had run up huge losses via the Robinhood app. To make his point, he called Robinhood’s automated help line: A message told users to email for support, and then the call ended. Here’s a clip of the hearing’s most noteworthy exchange.

What else happened. Robinhood wasn’t quite the only thing discussed (although it often seemed like it):

Ken Griffin faced harsh questions about Citadel Securities’ practice of paying brokers like Robinhood to execute their orders, but was frequently cut off when trying to explain the intricacies of the business. The billionaire stressed that his hedge fund had nothing to do with Robinhood halting trading in GameStop and other stocks.

Gabe Plotkin of Melvin Capital said his fund had been short GameStop for years, and the losses it suffered from the rise in the stock last month were big but manageable. Citadel’s investment in his firm during the frenzy was not a bailout, Mr. Plotkin said.

Steve Huffman of Reddit said there were no signs of market manipulation on the site’s forums where meme-stock traders gather, and asserted that the investment advice posted on Reddit is “probably among the best.”

Keith Gill, the day trader who goes by “Roaring Kitty” on YouTube, got the most sympathetic treatment, and seemed to be enjoying it, slipping meme-inspired jokes (“I am not a cat”) into his testimony. He said he remained bullish on GameStop’s stock, in exchanges which may come up again in a class-action lawsuit filed this week that alleges he “incited” the rally via his social media channels.

Over to you, Gary. The committee chair, Maxine Waters of California, said that she planned to hold more hearings, one of which will feature the S.E.C., the agency at the forefront of any regulatory response to the market frenzy. Gary Gensler, President Biden’s nominee for S.E.C. chair, is expected to bring a tough enforcement stance on everything from investor protections to oversight of the arcane financial plumbing that came up in questions to Robinhood, Citadel and Melvin.

The Senate is aiming for a confirmation hearing in early March for Mr. Gensler and the C.F.P.B. chair, Rohit Chopra, DealBook hears. (Nothing is final and the timing may slip.)

Uber suffers a big defeat in Britain. The company’s drivers must be classified as employees, entitled to a minimum wage and vacation, instead of independent contractors, the country’s Supreme Court ruled. It may set a precedent for gig-economy workers in the British market and beyond.

President Biden reportedly concedes that there won’t be an increase in the minimum wage soon. “Doesn’t look like we can do it,” he told a group of governors last week, according to Politico. He’s prioritizing his $1.9 trillion stimulus proposal instead. Separately, Walmart raised wages for hourly workers, with about half reaching at least $15 an hour, the level proposed by the White House.

The U.S. and Novavax make big contributions to a global vaccination effort. The White House said it would make good on a pledge to donate $4 billion to a campaign aimed at making and distributing Covid-19 vaccines worldwide, while the drug maker Novavax committed to selling 1.1 billion doses to an alliance that aims for equitable global distribution of vaccines.

A standoff between Steve Schwarzman and his “scholars.” Current and former participants in a master’s program funded by the Blackstone C.E.O. called on him to cut ties with lawmakers who objected to certifying the 2020 presidential election results, The Times’s Kate Kelly reports. Mr. Schwarzman has refused.

North America’s first Bitcoin exchange-traded fund pops in its debut. Nearly 10 million shares in the Purpose Investments E.T.F., which gives investors exposure to the cryptocurrency without needing to hold it themselves, were exchanged yesterday, making it one of the most active stocks in Toronto.

Who writes the rules?

In U.S. history, very few top financial regulators have been Black. Chris Brummer, a professor at Georgetown Law, spoke at an African American History Month event at the S.E.C. this week and called for an overhaul of the recruitment and appointment process for regulators, highlighting his own research on the lack of diversity in those ranks. Regulators write the rules of capitalism, he noted, and diversity helps ensure a wider perspective on the impact of policies.

Less than 2 percent of all financial regulatory leaders in the U.S. have been Black. Specifically, that’s only two of the 129 heads of major agencies since the founding of the Federal Reserve in 1913, Mr. Brummer said. Things have been no better at the upper levels of the agencies, in positions that serve as steppingstones to leadership roles, he pointed out. According to Mr. Brummer’s research, there have only ever been two Black division heads at the S.E.C., which was founded in 1934, and none at the C.F.T.C. since its founding in 1975.

“Wall Street is more diverse than the leadership of our regulatory agencies,” Mr. Brummer said. “One or two appointments even at the highest levels of leadership won’t begin to change the overall level of representation.”

Mr. Brummer, who is Black, is reportedly under consideration to lead the C.F.T.C. He was nominated for that position by President Obama, but the Trump administration withdrew his candidacy.

“A lot of C.E.O.s stay a little too long at the fair. I think it’s good for companies to have new leadership.”

— Rose Macario, the former chief executive of Patagonia, on her unexpected departure from the unconventional clothing company.

Next month, the Supreme Court hears arguments in a case pitting Goldman Sachs against investors led by a pension fund for teachers in Arkansas. The dispute centers on aspirational statements made by the bank that investors say they relied on — and that ended up costing them.

The case has been bumping along for a decade, mostly tied up in fights over whether the plaintiffs can proceed as a group. The investors claim that Goldman misled them with corporate statements ahead of a 2010 S.E.C. fraud case against the bank that hit its stock price (Abacus, “Fabulous Fab” and all that). Lower courts say the plaintiffs count as a class based on a presumption that all investors indirectly rely on company statements when making decisions to buy a stock. Goldman contends that was wrong and warned that companies would face an onslaught of litigation if the justices don’t reverse the decision.

The case could have “a severe chilling effect” on company openness, depriving stakeholders of information about “a broad range of issues, from corporate governance reforms, to environmental and societal goals,” wrote the Society for Corporate Governance in a “friend of the court” brief. The society noted that businesses are under increasing pressure to speak out on a wide range of issues; if this opens them up to litigation, it sets a trap that could discourage transparency.

In other briefs, former securities regulators and law professors warned of “draconian practical consequences” during the pandemic in particular, when corporate statements “have already been weaponized,” citing a new case against AstraZeneca based on setbacks in the Covid-19 vaccine. The Chamber of Commerce and other trade groups foresaw “runaway liability and mounting financial pressure for companies and their shareholders to pay on alleged misstatements that had no market impact.”

“The parade of horribles that petitioners invoke” is unfounded, attorneys for the S.E.C. and Justice Department argued in their recent brief, which took neither side of the case. The government refuted Goldman’s claims that reasonable investors don’t rely on aspirational statements, but agreed that there were questions about the relevance of Goldman’s generic statements.

Volkswagen is said to be weighing a spinoff of Porsche. (Bloomberg)

Why the office of comptroller of the currency is so sharply dividing Democrats. (The Atlantic)

House lawmakers will again grill the C.E.O.’s of Facebook, Google and Twitter, this time in a hearing about disinformation on social media. (WaPo)

Quibi, the defunct streaming service, suggested that Elliott Management funded a patent lawsuit against it to help the son of the companion of Elliott’s founder, Paul Singer. (WSJ)

Best of the rest

A program that gives underprivileged teens access to Ivy League classes may shake up the admissions process for America’s top universities. (NYT)

As the wife of Senator Ted Cruz learned, be careful what you say in group texts. (NYT)

We’d like your feedback! Please email thoughts and suggestions to [email protected]

Rolls-Royce plans to raise up to S$4.4 billion as Covid-19 bites