Foldable phones are not yet a thing. But Samsung really, really wants to change that.

Browne, the American designer known for his classic sensibility and Americana striping, has carved out an interesting niche for himself in technology as Samsung’s go-to fashion luminary for foldables, having designed exclusive versions of the previous two handsets. The effort appears to be a bid to give this bendable tech more fashion cred.

Unlike his last Samsung foray, the designer’s latest look is cast in white and light gray, giving them an airier feel than the dark tones set out in last year’s Galaxy Z Fold2, though, just as before, they feature his signature stripe.

According to Samsung, “The latest collaboration brings Thom Browne’s signature colors paired in perfect symmetry with streamlined glass bodies. Shiny silver hinges add to the unique design approach, enhancing reflections of light, while leather accessories, with their finely stitched details, signify that you have entered the world of Thom Browne.”

The Cape Makes A Return On The Runway 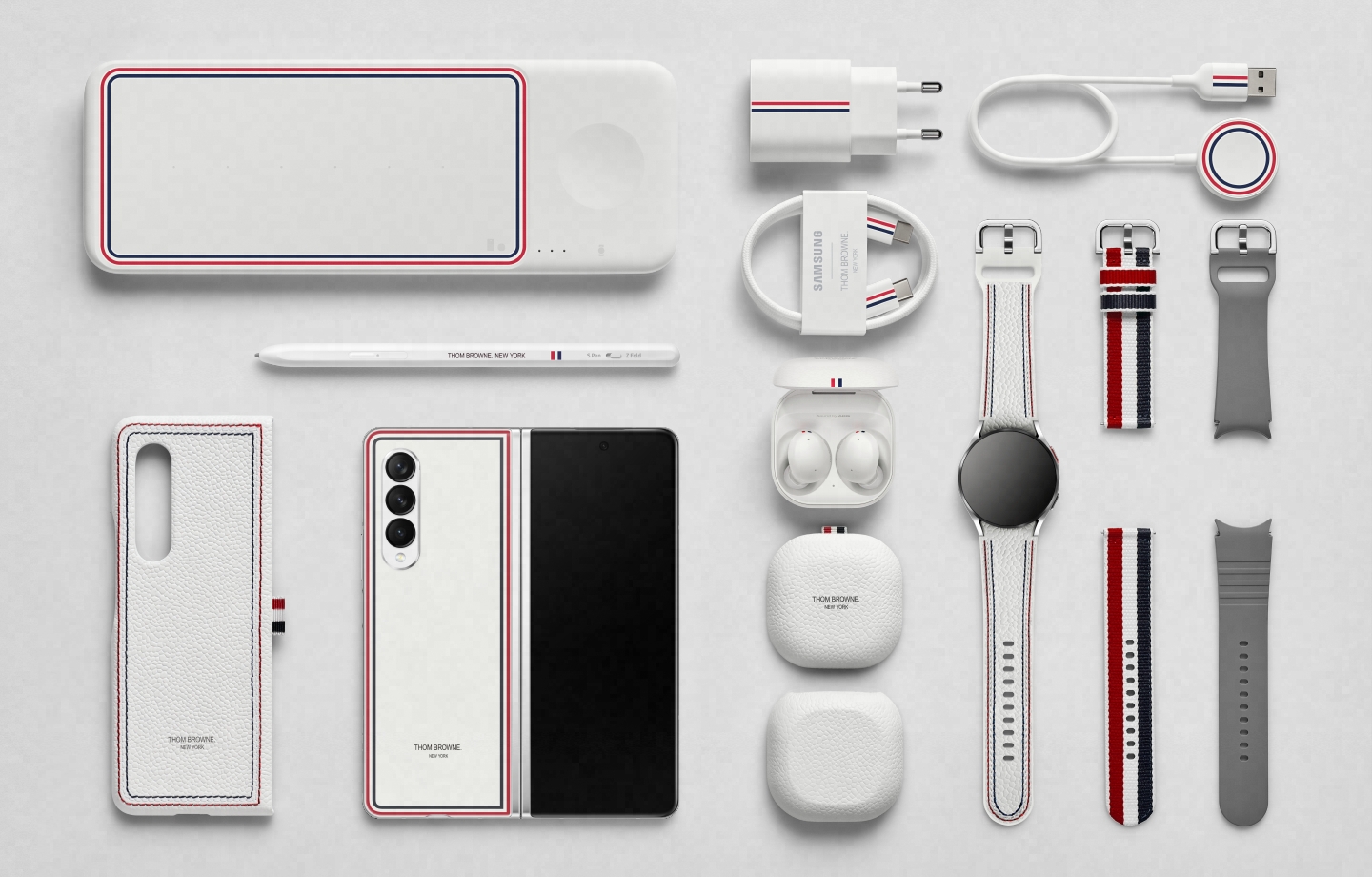 What’s in the box of the Thom Browne bundle. Courtesy image

These luxe devices anchor a fashion bundle that includes the Galaxy Watch4 and Galaxy Buds2, plus other accessories, including Samsung’s S Pen, which now works with the Galaxy Z Fold3.

The company, which didn’t disclose pricing, is kicking off pre-orders on Wednesday “in select markets.”

The units will surely cost more than standard pricing, which for the Z Fold3 will come in at an eye-watering $1,799. While that’s a price drop of $200 compared to the previous model, it’s still a lofty price for emerging consumer tech during a time when consumers are feeling the effects of heightened inflation ramming the U.S. economy.

The $999 price for the Z Flip3 may fare better, as it puts the flip phone more in line with Samsung’s Galaxy Note20 and the iPhone 12 Pro, which both start at $999. 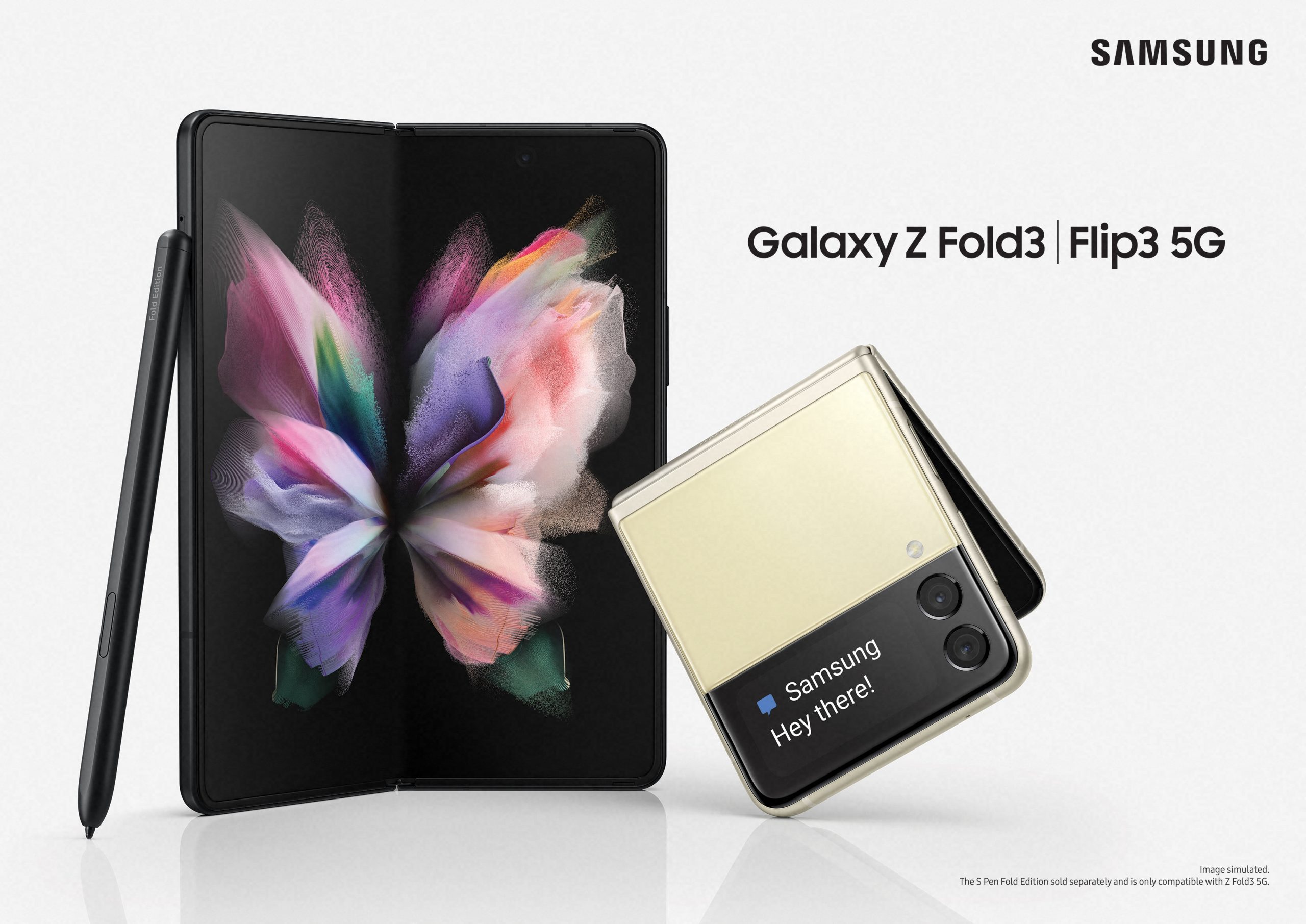 Whether consumers will flock to either is an open question. So far, they haven’t latched on to the foldable proposition. While Samsung doesn’t release specific numbers, research firm Canalys pegs its shipments of foldables at just 257,000 units in the second quarter.

According to the firm, Samsung is the largest producer of foldable phones so far, accounting for nearly two-thirds of the 3.4 million units shipped over the two years. But it is not alone.

Motorola’s Razr 5G aims to bring back some nostalgia with a reimagined, smarter version of its original Razr flip phone. It, too, took a swipe at its own fashion moonshots last year, with collaborations with Christian Cowan on a Razr 5G flip phone-sized bag collection and a fashion short film starring Julia Garner from “Ozark.”

Most recently, the device popped up in HBO Max’s “Gossip Girl” reboot in July as a new take on the Serena Van Der Woodsen flip phone.

This may be the time when foldables must ultimately prove themselves or back away, especially if they’re going after fashion consumers who seem fascinated by Y2K trends. If these phones can’t succeed in an environment like this, one wonders if they should be retired.

On the other hand, offering devices built for people on the go — as the pocketable clamshell Galaxy Z Flip3 and the almost mini laptop-like Galaxy Z Fold3 seem to be — during an ongoing pandemic that threatens to hamper travel and activities once more may not make for the best timing.

Apart from looks — and perhaps that satisfying feel of snapping a phone closed — there is, of course, the tech to consider.

The vertically folding Galaxy Z Flip3 features a smaller hinge and a larger cover display. The 7.6-inch Z Fold3 with Infinity Flex display now works with the company’s S Pen stylus, which became popular alongside Samsung’s Note series and certain tablets, and it also includes a hidden camera that’s below the main screen, negating any need for an intrusive notch at the top.

Samsung says both devices are stronger and more reliable than previous models, which have been criticized in the past for fragility, particularly regarding the screen and hinges.

The Galaxy Watch4, available as standard and classic versions, are Samsung’s first smartwatches powered by the Wear operating system it developed with Google. The partnership unites the search giant’s software and bustling app-ecosystem with Samsung’s popular Tizen OS, which critics generally like but ding for a lack of watch apps.

According to Samsung, the devices are speedier and offer better visuals from the screen and faster charging — a half hour of charge time supposedly nets 10 hours of battery life. Perhaps more importantly, it comes with more sensors packed in to boost health and wellness features, from advanced sleep (or snore) tracking to measuring body composition to skeletal muscle, basal metabolic rate, body fat percentage and even water retention.