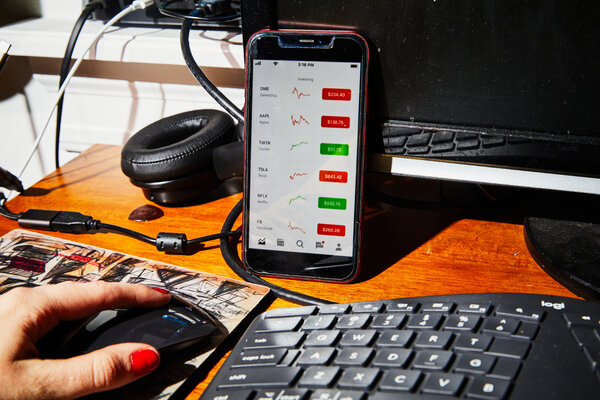 Robinhood, which touts its mission as “democratizing finance,” is trying out a new kind of I.P.O.: The online brokerage plans to sell as much as a third of its offering to customers through its app. What could go wrong?

It’s the most a major company has offered to ordinary investors in an I.P.O. Most businesses — including the hospital-scrubs maker Figs, which used a Robinhood program to sell stock to retail investors as part of its offering — have set aside roughly 1 percent of shares for retail investors.

The big risk is volatility. Underwriters traditionally worry about letting retail investors have an outsize allocation in I.P.O.s because they are considered more likely to immediately dump their shares. And many of Robinhood’s customers are active traders, as shown when it became the brokerage of choice during the meme-stock frenzy. Robinhood is also letting its employees sell up to 15 percent of their shares immediately upon its listing.

Robinhood’s bankers expect early trading to be choppier than other offerings, people involved in the process said. That could anger customers, prompting lawsuits and regulatory scrutiny. And if the stock falls after its debut, its investors will also have less money to trade on the platform.

“If it works, it’s going to be a fantastic win,” said R.A. Farrokhnia of Columbia Business School. “If it goes badly, it will be a black mark.” A smooth offering could help burnish the company’s reputation, which has been marred by regulatory fines, technical outages and complaints about customer service. We’ll see what happens next Wednesday, when Robinhood is set to price its shares, and on Thursday, when it is expected to start trading. At the high end of its expected price range, the company would be valued at $35 billion.

There are plenty of cautionary tales in I.P.O. history. Here are a few of the big ones:

Google in 2004 tried using a Dutch auction, in which investors submit individual bids for shares and the I.P.O. price is set at a level that would sell the most stock. The tech giant was forced to cut the size and price of its offering. (Dutch auctions never really took off after that.)

Vonage, a phone service provider, tried to sell shares to its customers as part of its 2006 I.P.O., but a technical glitch left buyers unclear over whether their trades had gone through until days later, by which point its stock price had plummeted. Customers sued Vonage, and regulators fined the banks that ran the offering.

BATS Global Markets sought to go public on its own exchange in 2012, but a series of “technical issues” forced it to halt trading in several stocks, including its own, and eventually pulled its offering. (It later went public in 2016.)

Johnson & Johnson joins a $26 billion opioid settlement. The deal, which also includes three major distributors, will give billions to ravaged states and cities and end years of litigation against the companies. Thousands of lawsuits against others — including manufacturers and drugstore chains — remain unresolved.

President Biden predicts vaccines will get final approval this fall. At a town hall in Ohio, Biden said the F.D.A. would probably provide official signoff on Covid inoculations — all are currently authorized on an emergency basis — and ease the concerns of some vaccination holdouts.

Banks urge Chinese businesses to move their I.P.O.s to Hong Kong. Wall Street underwriters are telling clients to pivot to the territory, after Beijing’s crackdown on domestic tech companies listing abroad, The Financial Times reports. But many won’t be able to, given Hong Kong’s strict eligibility requirements.

PG&E will spend tens of billions to bury power lines. The California utility said it would put 1,000 miles a year underground — up from 70 miles planned this year — to help prevent wildfires. The move came after a report that found PG&E equipment was most likely responsible for the 30,000-acre Dixie Fire. Culpability for wildfires pushed the company to file for bankruptcy in 2019.

KKR will announce today that it’s making a “significant” minority investment in Sol Systems, a U.S. renewable energy company that helps finance solar projects. The buyout giant, which has $367 billion in assets under management, is also committing to spending up to $1 billion in projects with Sol.

“Almost all large corporate customers, including many of the traditional oil and gas companies, have goals to go 100 percent renewable by 2030 or 2040,” said Yuri Horwitz, Sol’s C.E.O. Those commitments come amid regulatory and investor scrutiny that is expected to intensify in the coming years.

Private equity is racing to invest in renewable energy during the Biden administration, driven in part by expectations of increased public investment as the White House aims to cut the country’s fossil-fuel emissions by 80 percent by 2030. Yesterday, Carlyle announced it was forming a renewable energy infrastructure unit. KKR, for its part, brought on Tim Short and Benoit Allehaut this spring to help steer renewable investments in its $18 billion infrastructure division. Among its recent deals was a $1.4 billion investment last year in the wind and solar company NextEra.

But KKR is still betting on fossil fuels. “Natural gas is still a very important aspect of the energy transition until we have technology solutions that allow otherwise,” Short said. And last month, the firm announced a $5.7 billion deal to create a vehicle that consolidates shale oil companies.

— Elon Musk, speaking on a panel about his habit of talking up Bitcoin but denying that he does so to earn a quick profit. He also revealed that he personally owns Ethereum, in addition to Bitcoin and Dogecoin, and that his rocket company, SpaceX, owns Bitcoin. (Tesla bought $1.5 billion worth of Bitcoin this year.)

Road to Retirement: How taxes, deficits and markets are connected