Pinterest is getting serious about boosting its shopping powers. On Tuesday, the company unveiled a new tool that lets multimedia content creators make their Idea Pins shoppable and earn money from affiliate programs.

While people have been able to shop static Product Pins for years from advertisers, creator-led Idea Pins now come into the commerce fold. The video- and music-driven content will be taggable with products, so creators can earn commissions from affiliate programs such as Rakuten and ShopStyle.

The change puts Pinterest more in line with social video rivals Instagram, YouTube and TikTok, all of which have been focusing on their creator communities to amplify shopping and capitalize on brand partnerships and sponsored content.

The deal injected the platform with a rush of catalogues and allowed creators with Shopify stores, such as Rebecca Minkoff, Deepica Mutyala and Omotola, to set up merchant storefronts on Pinterest with a shop tab and dynamically created product recommendations. 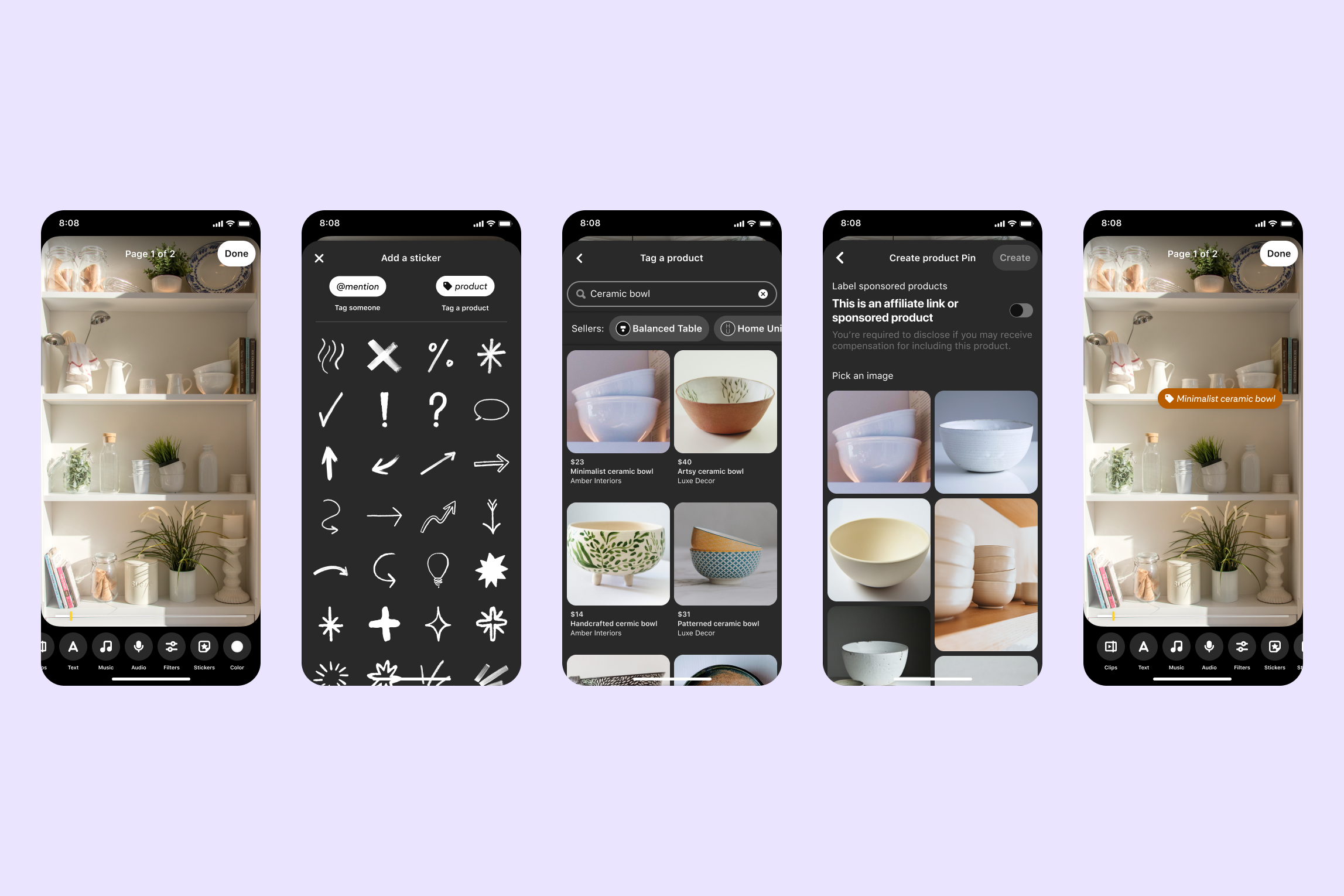 As if it needed more motivation to double down on its shopping efforts, the company also clocked a 20-time increase in product searches at the end of 2020. According to its data, 77 percent of weekly Pinners have discovered a new brand or product on the platform.

Given that it has more than 478 million global monthly active users — a 30 percent year-over-year growth — and reaches 41 percent of U.S. internet users monthly, that’s a massive potential fount for commerce.

In the U.S., Pinterest boasts three in five adult women, 72 percent of moms, 76 percent of Millennial women and one in three Millennial men.

Pinterest clearly hopes to channel that intent into purchases using one of social media’s biggest trends right now: Social video and music. Uploaded recordings, livestreams and the like have been driving heightened engagement over static images across rival platforms, and Pinterest noticed the same momentum with Idea Pins since the format’s debut in May.

“People come to Pinterest to shop, and that propensity increases with Idea Pins — in fact, we found Pinners are 89 percent more likely to exhibit shopping intent on products tagged in Idea Pins than on stand-alone Product Pins in other shopping surfaces,” the company said.

Social video as an engagement driver and shopping tool doesn’t work without legions of creators behind it. Pinterest seems to have gotten the memo, as it’s now courting the creator community.

Indeed, the tech company is framing the update as a way to help Pinterest influencers make money. Creators like Olive + Brown, Fall for DIY and UnconventionalSouthernBelle, who have been testing the feature, have already been tagging products in their uploads.

Perhaps to keep them engaged and enthusiastic, the company also revealed that it’s been working on a way to let influencers disclose the paid partnerships for their branded content. Creators who want to tout these relationships can add the brands to their Idea Pins. Once a brand approves a given tag, the pin then features a “Paid Partnership” label. 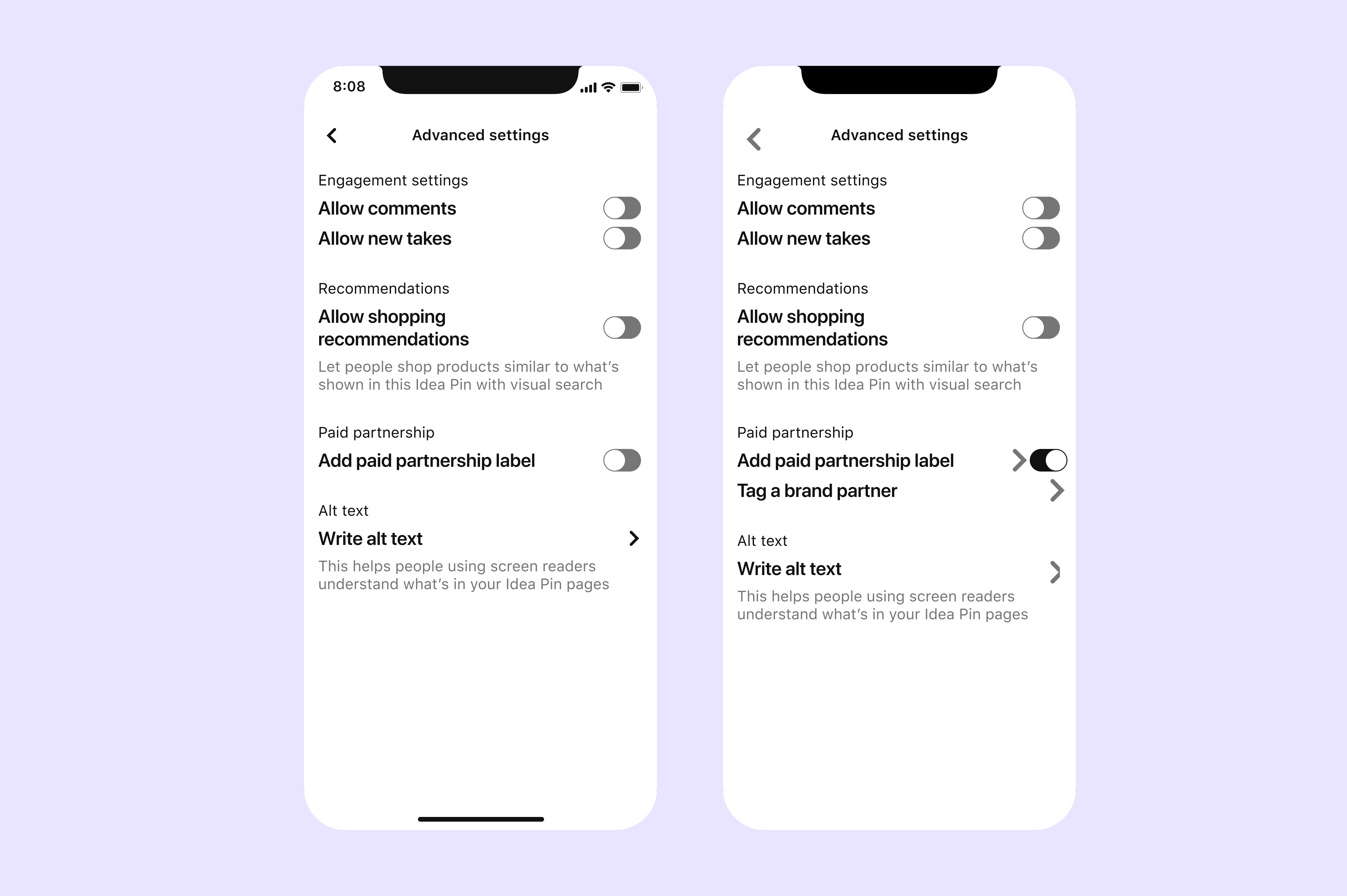 Creators can promote their brand partnerships by adding the company to sponsored or branded posts. Courtesy image

The paid partnerships tool, which is in beta, is live for a limited set of creators in the U.K., Ireland, Australia, New Zealand and in select regions across North America, South America and Europe.

Meanwhile, product tagging for Idea Pins will begin officially rolling out to U.S. and U.K. business account holders next week. Eventually, Pinterest said, it will expand to include international creators “over the coming months.”