Jeannie Morris, a television sports reporter, was in the visitors’ dugout in 1972 before a game at Comiskey Park in Chicago when the Hall of Fame hitter Ted Williams, who was managing the Texas Rangers, ordered her out.

“This is my dugout, get out of here — no women in my dugout,” she recalled him bellowing when she was interviewed by the Chicago Bears Network in 2015. “And I said: ‘This isn’t your dugout. It belongs to the Chicago White Sox and they said I could be here. OK?’

Such were the obstacles Ms. Morris faced as a rare woman in sports broadcasting in the early 1970s, before the hiring of women by networks and local stations became commonplace. But she ultimately found great success, becoming a prominent sportscaster in Chicago and winning 12 Emmy Awards.

“She was like iron under velvet,” Lesley Visser, a former sportswriter for The Boston Globe who began working for CBS Sports in the 1980s, said in an interview. “She wrote and produced most of her features, which was not the norm. She was spirited, in an easy way, but think of how strong she had to be.”

Her daughter Holly Morris said the cause was appendiceal cancer. 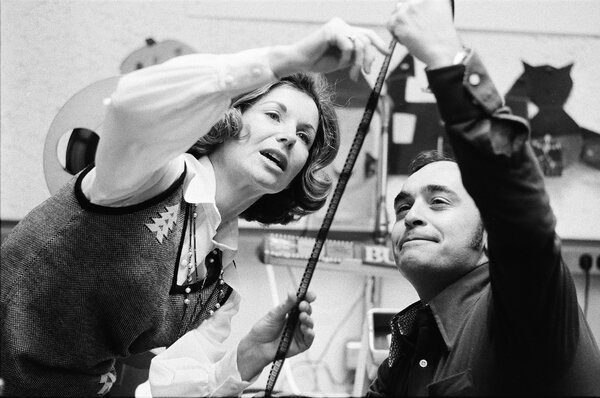 Alice Jean Myers — who was known first as A.J., then Jeannie — was born on Feb. 2, 1935, in Walla Walla, Wash., and grew up in Palos Verdes, Calif., outside Los Angeles. Her father, Newall, was a school principal and superintendent. Her mother, Jean (Dutro) Myers, nicknamed Bottsy, was a homemaker who later became the chief administrator of the academic senate at the University of California, Los Angeles.

Jeannie’s interest in sports was fueled by her mother, a U.C.L.A. fan, who once sent her out to listen to a U.C.L.A. game on the family’s car radio, and return with the score, when the rival U.S.C. game was on television.

She studied English at the University of California, Santa Barbara, where she met Dan Boorman, the star third baseman on the school’s baseball team. She dropped out after her sophomore year and married him in 1955.

The marriage ended in divorce, and in 1960 she wed Johnny Morris, a wide receiver for the Chicago Bears, whom she had also met on the Santa Barbara campus.

Ms. Morris’s first break in sports came after her husband retired from the Bears in 1967 and became a local sportscaster. When The Chicago American newspaper asked him if he would write a column, he declined but said that his wife was a writer and should be hired.

She got the job, but her byline did not reflect her name. Rather, following societal norms of the time, “Mrs. Johnny Morris” wrote a weekly column, “Football Is a Woman’s Game,” which ran in the paper’s women’s pages before it shifted to the sports section of The American and, later, The Chicago Daily News. Eventually, her byline changed to Jeannie Morris.

As the wife of a Bear, she had plenty of material to write about.

“It was because I lived 10 years of a football life that most people didn’t see,” she told The Athletic in her last interview, shortly before she died. “There was a subculture. There were good stories in the subculture.”

In 1969, Ms. Morris joined Mr. Morris at the Chicago television station WMAQ, where they began a long run as a popular local media couple. Early on, the station marketed her as a soft-news reporter. An advertisement in The Chicago Tribune in 1970 promoted her “woman’s view of the sports world,” through which it said viewers met “top personalities in sports, their families and their friends.”

She would soon prove herself as a field reporter, covering and producing news and features on Chicago sports.

“She was my No. 1 reporter,” Mr. Morris said in a phone interview. “A lot of times I had to give her tough assignments, but I knew she was up to it.” He added, “She was competitive — as competitive as I was — and we made a good team.”

As her television career advanced, she also wrote a biography of the Bears running back Brian Piccolo, who was sick with cancer in 1969.

“I just called him one day when he was in the hospital in New York and I said: ‘Gale Sayers is writing a book. Why don’t you?’” she told the Chicago TV station WTTW in 2014. Sayers, Piccolo’s star teammate, published an autobiography, “I Am Third” (1970, written with Al Silverman), which was adapted into “Brian’s Song,” an emotional 1971 TV movie about his friendship with Piccolo that garnered huge ratings.

Ms. Morris published “Brian Piccolo: A Short Season” in 1971, a year after Piccolo died. In his review in The New York Times, the football writer Paul Zimmerman wrote: “The football sequences in the book all ring true. The emotion is never contrived. Jeannie Morris has written a rare and beautiful book.”

Ms. Morris also wrote “Adventures in the Blue Beast” (1975), about her family’s 13-month trip through Europe in a Ford Econoline van.

She is believed to have been the first woman to report for network television from the Super Bowl. In 1975 she interviewed the Pittsburgh Steelers owner Art Rooney before the game on NBC and spoke to fans after the Steelers’ victory over the Vikings.

That year, the Morrises moved to another Chicago TV station, WBBM. Over the next 13 years, she worked on the daily sports reports and also produced series on subjects including Title IX and documentaries on the Bears and Michael Jordan. She and her husband also co-hosted “The Mike Ditka Show,” starring the Bears’ cantankerous coach, even after they divorced in 1985. Their friendship endured.

She left the station in 1988, partly because of her disappointment in the role she played on the Ditka show, which included holding a microphone to stage-struck fans in the audience as they asked Ditka questions.

“I felt it was demeaning to women,” she told The Chicago Tribune after her departure.

Ms. Morris soon began producing documentaries, including one for TBS, “Science Held Hostage: RU 486 and the Politics of Abortion” (1992), in which she told the story of her own illegal abortion in Mexico, and “The Search for Shangri-La,” on PBS, which brought her to a base camp on Mount Everest.

In 2014, Jeannie Morris became the first woman to receive the Ring Lardner Award, which honors broadcasters and writers whose wit and warmth exemplify the words of the famous sportswriter, author and playwright.

A year later, she published her last book, “Behind the Smile: A Story of Carol Moseley Braun’s Historic Senate Campaign,” about the Illinois Democrat’s victorious 1992 race.

In addition to her daughter Holly, Ms. Morris is survived by two children from her first marriage, Dan Boorman and Debbie Dimick; a son, Tim, from her marriage to Mr. Morris; her sister, Donna Stewart; and seven grandchildren.

Ms. Morris and her daughter Holly produced “Adventure Divas,” a documentary series about women who made significant changes around the world. It was shown on PBS stations in 2001 and 2002.

“I grew up with this trailblazing woman, but she was my mom,” Holly Morris said. “It was special to learn from her, see another angle on who she was, and see her in action.”