Home » Business » HS2 explained: What is it and how much will it cost?

Britain’s high-speed rail infrastructure project has been given the go-ahead by the prime minister following concerns over spiralling costs.

HS2 is a planned high-speed rail network between London, the West Midlands, Manchester and Leeds.

It is Britain’s biggest infrastructure project and has had support from governments of all stripes since it was first mooted more than a decade ago.

The project has been beset by delays and rising costs with latest estimates putting the price tag at more than £100bn. 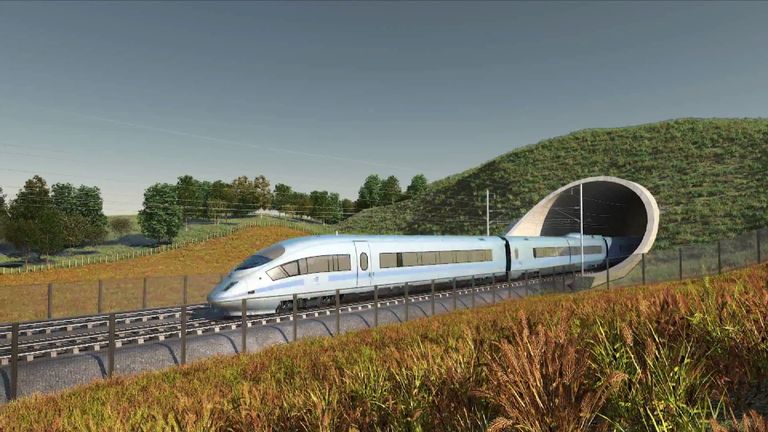 It could be 2040 before passenger services are operating on the full network, according to the project’s most recent official forecast.

HS2’s inception follows the development of HS1, the high-speed line between London and Kent connecting the UK to routes on the European continent.

The aim is to run 18 trains an hour in each direction to and from London – at speeds of up to 224mph – compared to between two and six an hour on Europe’s high-speed railways.

It involves the construction of more than 300 bridges and 70 viaducts for the London-West Midlands phase alone.

There will also be six new stations including Birmingham Curzon Street and extensions for London Euston and Manchester Piccadilly.

The project is designed to meet the long-term growth in demand for rail services, improve the reliability of the network, boost connectivity by making journeys faster and easier, and help economic growth across the UK. 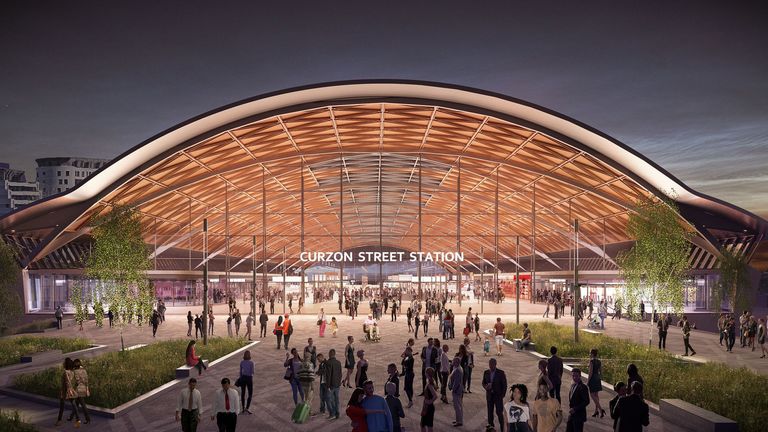 What is the route?

Stations on the first phase of the line will be London Euston, Old Oak Common in west London, Birmingham interchange and Birmingham Curzon Street.

The second phase will see trains head northwest to Manchester Airport and Manchester Piccadilly or heading onto existing lines via Wigan, Crewe and Stafford.

They will also go northeast from Birmingham towards the East Midlands Hub at Toton from where they will continue on the HS2 line to Leeds, with others diverging onto existing lines via Chesterfield and York. 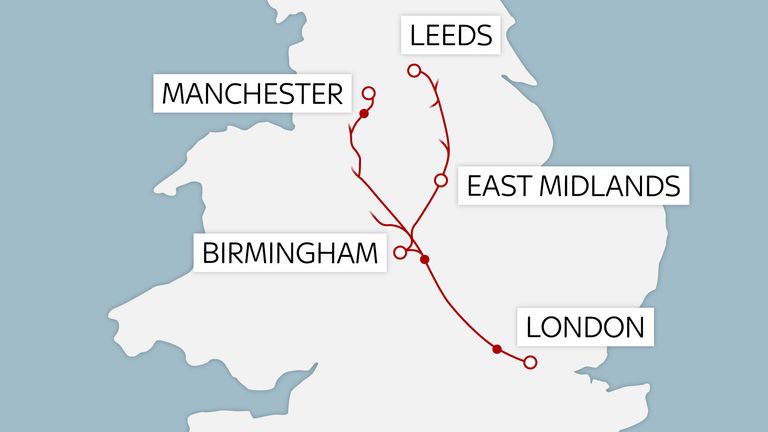 Where did it all begin?

In 2009, under Labour transport secretary Geoff Hoon, the government set up a company, HS2 Ltd, to look at proposals for a new high-speed line.

The following year, the Department for Transport set out plans for a Y-shaped network connecting London and the cities in the North.

Later under the Conservative-Liberal Democrat coalition, it was confirmed that the line would be built in two phases.

Phase 1 would run from London to the West Midlands, beginning in 2026.

Phase 2, extending from the West Midlands to cities in the north, would start in 2032-33. 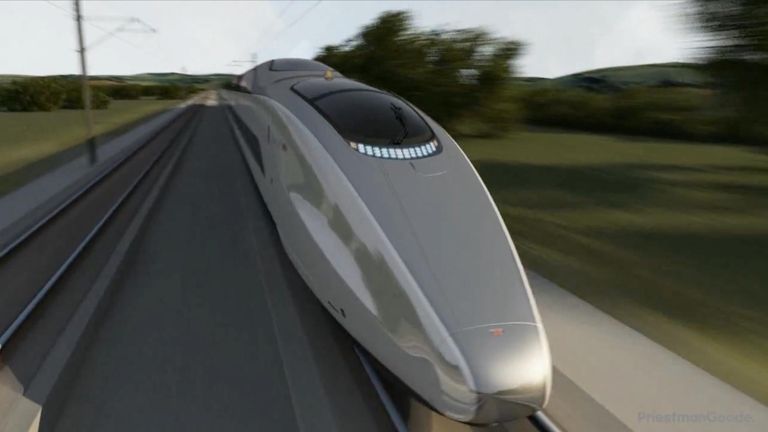 What’s the hold up?

By July last year, the government accepted that timetable was no longer feasible.

Reasons for the delay include a year spent revising cost and schedule estimates for Phase 1 and more time being needed for construction at various sites.

In August 2019, the government announced an independent review of the programme to advise on whether to proceed. 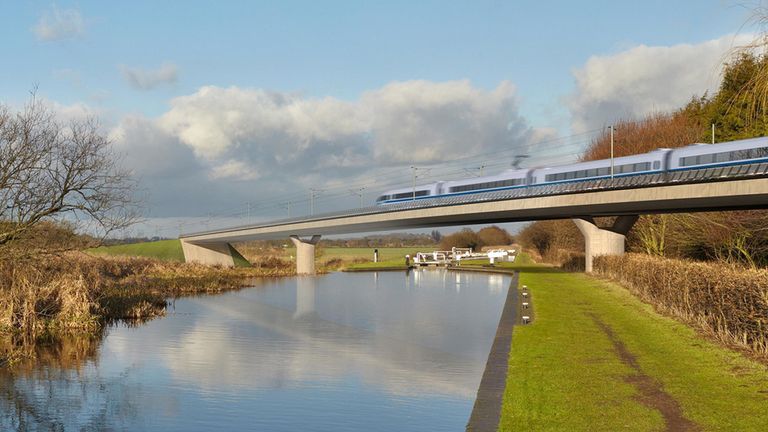 What is the latest timetable?

The aim is now to start running partial services on Phase 1 – between Old Oak Common in London and Birmingham Curzon Street – between 2029 and 2033.

Full services running from London Euston are set to start from 2031 to 2036.

It is estimated that services on the full network, including Phase 2, will open between 2036 and 2040.

If work on the line does not begin by March 2020, the timetable may be at risk of further delay. 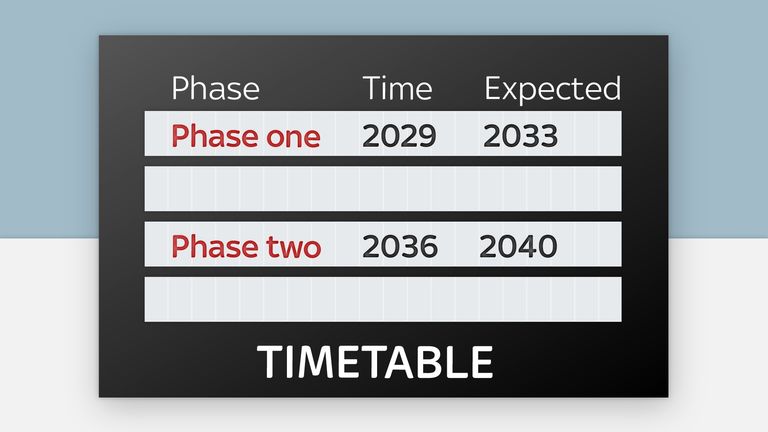 How much is it going to cost?

At the time of the 2010 election, estimates of the cost of HS2 ranged upwards of £20bn.

By January 2012, when the broad route of the proposed scheme was in place, this had risen to £32.6bn.

In June 2013, the coalition government increased the overall cost to £42.6bn and in November 2015, when the figures were updated, in line with inflation, to £55.7bn.

The DfT’s latest estimate of the cost of HS2 has spiralled even higher, to between £65bn and £88bn.

But Lord Berkeley, former deputy chairman of the government’s independent review into the project, says it could climb to £107bn. What are the arguments for and against?

Governments have insisted that HS2 – whose cost will largely be borne by the taxpayer – is a good investment for the country.

They say it will deliver growth, particularly in the English regions, and have an overall positive impact on jobs and growth.

Those opposed to it dispute those claims, saying that the money would be better spent on improving rail capacity elsewhere, and that it will blight homes and damage the environment where the route is to be built. 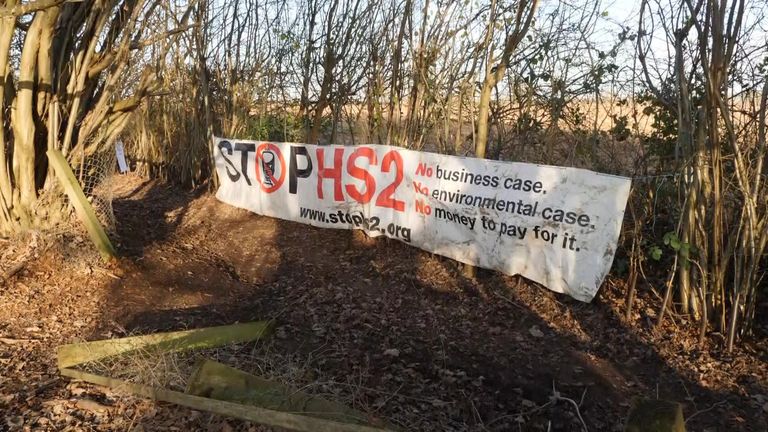 Why have the costs risen so much?

A report in January 2020 by the National Audit Office – the spending watchdog – said HS2 Ltd had not accounted for the level of uncertainty and risk in the plans.

It used a method for calculating how much extra might be needed “that was not appropriate for a programme at such an early stage of development”.

Among the factors causing higher costs were commitments to increase the length of tunnelling and to erect noise barriers.

The NAO said the government and HS2 Ltd had “not adequately managed risks to taxpayer money”.

More money was needed for building bridges, tunnels and stations were needed than first thought.

Complex issues involving the discovery of asbestos and archaeological remains, and the need to divert more gas and power lines than expected, have caused problems too.

Extra cash was also needed to buy up properties to make way for the rail line.

Even after these have been accounted for, there is further uncertainty about the cost of extending London’s Euston station to accommodate high speed trains. 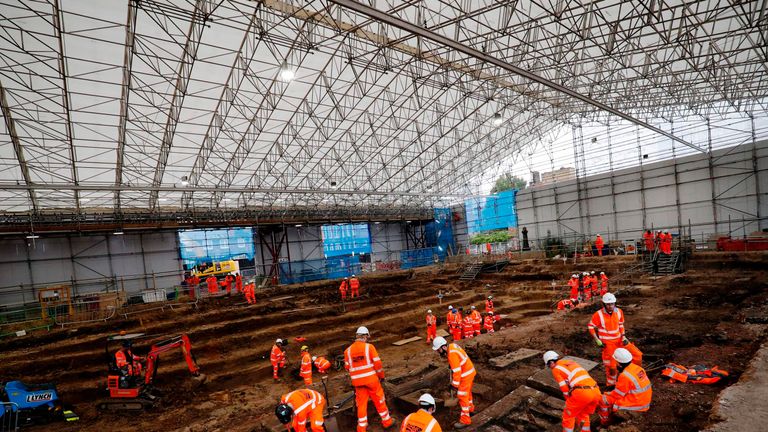 What has actually been done so far?

As of March 2019, £7.4bn has been spent including the purchase of land and property and preparatory work at 250 locations. HS2 has now bought 66% of the land required to build Phase 1.