Hermès is ramping up its retail presence in the U.S.

The French luxury brand this week will open its first store in the Detroit market, a 5,000-square-foot boutique at the Somerset Collection mall in Troy, Mich., about 30 miles outside the city. The Michigan store is one of several the brand has planned for this year in the run-up to its major move: the consolidation of its two existing Madison Avenue stores into one massive flagship nearby in the fall of next year.

“Troy is our 30th store in the U.S. market, which we continue to believe has tremendous potential,” said Robert Chavez, president and chief executive officer of Hermès USA. He said Hermès is probably “one of the least distributed luxury brands in the country,” and to rectify that, it plans to “continue its geographical expansion.”

Michigan marks only the 15th state where there is an Hermès store, prompting Chavez to joke: “Only 35 to go.”

The Somerset Collection store, which will have 3,500 square feet of selling space, is the second one Hermès has opened in a Forbes Company center, following the Mall at Millenia in Orlando, Fla. Chavez said Hermès is impressed by how the high-end developer creates and maintains its centers and offers a “total luxury” experience.

The store was designed by RDAI, a Parisian architecture firm, and blends Hermès’ French heritage with elements that showcase Michigan’s landscapes. For example, the façade is made from honed blue and gray St. Clair stone that was patterned after a chevron and replicates the structure of a feather. The centerpiece of the interior is three granite monoliths and a wooden grid displaying Hermès’ silk collections. Around the space is a series of alcoves devoted to different product offerings: for example, enamel and leather bracelets from the accessories collection are combined with pieces from the women’s and men’s silk offerings. To the right are Hermès perfumes as well as beauty products, a new department featuring the makeup line, including some limited editions. There’s also an equestrian area alongside collections for the home, set in shades of blue and brown. Anchoring the center of the store are leather goods, defined by brown and gray stone walls.

Throughout the boutique are American oak floors, as well as bespoke carpets designed to be reminiscent of the rings of a tree trunk in shades of ochre, brown and cool blue that connect the leather department to watches and jewelry. Floral fabrics and wooden wall coverings are used for the ready-to-wear and shoe collections for women and men, which also feature Grecques molded glass globes, designed specifically for Hermès in 1925, that are also used in the VIP suite.

Chavez said the shop will have a soft opening today but is not holding an official grand opening because of the pandemic. Instead, the team is reaching out to arrange one-on-one appointments with customers until restrictions on indoor retail are completely lifted, he said. 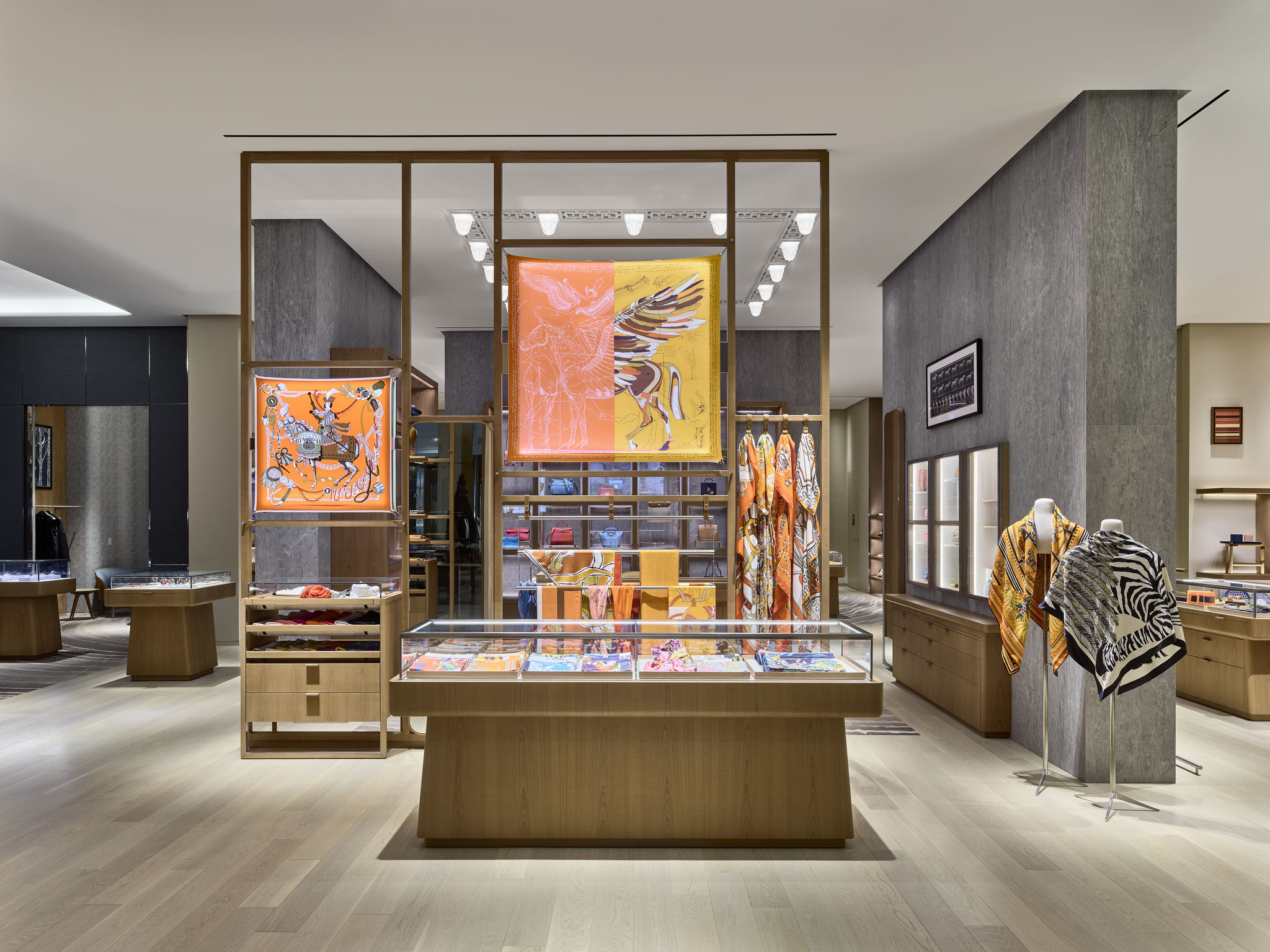 In September, he said, when the pandemic will hopefully continue to wane, the store will host an exhibition, “Hermès in the Making,” which will “give the local market the opportunity to experience the quality, craftsmanship and details” that define the brand, Chavez said.

One bright spot of the pandemic, he said, is experiencing how much the Hermès customer has embraced the opportunity to schedule personal shopping appointments. “Our customers are loving and appreciating the one-on-one service and the undivided attention they receive,” he said, adding that this also gives the associates the ability to “curate” an assortment for them before they arrive. Chavez said the customers “expressed great appreciation” for this service all last year as the company’s stores were forced to close or open with limited hours.

As a result, he said Hermès will experiment with using a “hybrid” approach at its stores in the future, offering by-appointment shopping on two days and public shopping on four, for example. “But we’ll make private appointments every day if the customer wants it,” he said.

In addition to Troy, Chavez said Hermès is planning to open a store in the Aventura Mall in Florida in September, the American Dream mall in East Rutherford, N.J., in mid-September when the luxury wing debuts, and South Coast Plaza in Costa Mesa, Calif., at the end of the year. The South Coast Plaza store is a renovation and expansion of an existing unit, he said, a move that will increase the size of the store from 7,000 square feet to more than 11,000 square feet in a former Tiffany location. “Our business there has been very productive and successful,” he said, adding that by taking over that location, it will allow Hermès to have its own outside entrance.

Overall, Chavez said Hermès is “very bullish and optimistic” about its retail stores. Although the brand had a small wholesale business several years ago, the decision was made to exit that channel of distribution to focus in on its own retail. The only products that continue to be wholesaled are fragrances, tableware and watches, he said. “But there are no other categories in wholesale distribution.”

Hermès’ retail rollout is paying dividends and will continue to be the focus for the future, he said. “Our business is very strong this year,” Chavez said. Even during the height of the pandemic, “we never changed our strategy. We were always very consistent — we don’t let anything derail us.”

Beyond 2021, Chavez said Hermès will continue its “ambitious” retail expansion, adding stores in new markets across the country. That will include a second store in Los Angeles; Austin, Texas; Phoenix, and a third store in the Naples, Fla., market in another Forbes Company mall, the Shops at Waterside. Also on his short list is Nashville as well as second stores in larger, existing markets.

“Then our major project will be the move on Madison Avenue in September of 2022,” he said. As reported, the company signed a lease in 2019 for a five-story building at 706 Madison Avenue and will open a flagship that will combine both its men’s and women’s stores currently located across the street from each other on the shopping street.

Chavez said that in his 40 years in the retail business, he’s “never seen anything” like the fast return of customers to shopping in the past several months. In the past when the business slowed down, it was either because of a recession or a major jolt to the economy and the return was gradual. But once people were able to safely leave their homes and start shopping again this time, Hermès experienced “huge pent-up demand,” he said.

Opening stores outside the U.S. is also planned, with a new unit slated for Shenzhen, and expansions in Milan and Beijing. In Paris, the company just reopened its flagship on Rue de Sevres after a yearlong renovation. All told, Hermès operates 306 stores around the world.